In traveling, as in life, problems are inevitable. Don’t worry – it isn’t my intention to subject you to some corny motivational message about overcoming them. I just wanted to share a story about when things went wrong for us – and then how they continued to get worse – over the course of two weeks.

We woke at 6 am to begin our trip from Anda on the island of Bohol in the Philippines to Hanoi, Vietnam. This involves a 3.5 hour bus ride to Tagbilaran, several hours waiting in the airport, a short flight to Manila, 4 hours more waiting in the airport, and then a 10:20 pm flight to Hanoi. By the time we went through the visa-on-arrival process we were exhausted. We used the ATM to get money to take a cab, got a ride to our hostel and then were about to go sleep. It was 4 am – a nearly 24 hour day. Right before I went to bed I connected my phone to the hostel WiFi and heard a beep. I checked my messages and had a text from Charles Schwab asking me to confirm a recent withdrawal. I figured that I should call to confirm the ATM withdrawal was me before going to sleep to make sure they didn’t block or cancel my card. The automated system asked me for my card number so I opened my wallet to find that… I had left the card in the ATM. Thanks, 2 am brain. I called to report the card lost and then went to sleep.

I call and find out that I can have a replacement card FedExed abroad for 15 dollars. It turns out that I’ll have to print off an authorization form, sign it and put the address to have the card sent, and then upload it to the Charles Schwab website. A bit of a hassle, but no problem, it was dumb of me to lose the card.  I fill out the form, upload it, and wait. I was told on the phone the card would arrive in 3-5 business days and we had it sent to a hostel that we would arrive at 7 days later so we figured there was plenty of time.

No indication on the web site that my message was received and processed. I was concerned they would send the card too late and it would arrive at a hostel after we left. So I responded to my original message with a new authorization form and a request to send the card to an address for a hostel further along in our journey and ignore the original card request.

Still no response from the bank. We were just about to leave the hostel we originally asked to have the card shipped to when they told us we had received a package. Great! They must have sent the first card anyway, but at least I got it in time! 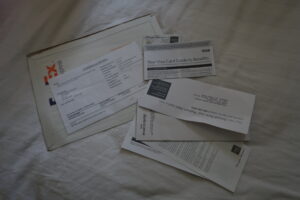 The card has arrived!

I call to activate the card but the call drops after I complete what I assume is the activation. Problem solved.

Not! We arrive in Danang, Vietnam and I go to withdrawal cash using the new card. Right when the machine would normally dispense cash it tells me that there was an error and that it is keeping my card. What‽ Both the temperature and humidity are almost at 100. We have our bags on our back since we have just arrived and I try calling Charles Schwab to ask why the machine ate my card. I’m told I’ll need to contact the local bank but in the mean time the agent can put a temporary hold on my card. Argh! I call the Vietnamese bank that runs the ATM and was surprised to get a helpful English speaking agent. He says they can retrieve my card but I’ll have to pick it up at the bank the next day.

I get a call that my card is waiting at the bank. We walk across town in the sweltering noon heat and retrieve the card from Techombank without too much hassle. Finally, our trials are over! I call Charles Schwab back to have the temporary hold removed and I’m told that the card I’m holding does not have a temporary hold – it was permanently blocked. It turns out we went through all the hassle to retrieve a card that was not and could never be activated! Apparently Schwab had seen my message, sent out a second new card to the updated address and then canceled the first card before it had even arrived! That would have been reasonable… if they had told me! A few more phone calls and I had the temporary hold removed from the card that hadn’t even arrived yet and I had a tracking number. The card was on it’s way to the hostel we would be at the next day.

The hostel had our card when we checked in. It activated successfully and I took money out. Our trials were over. 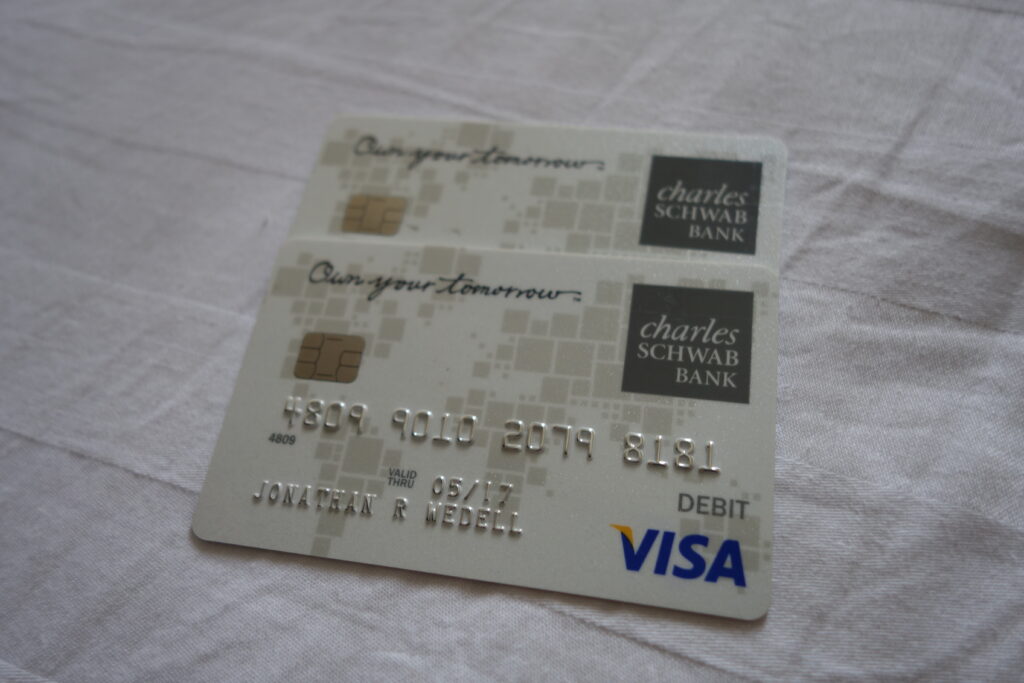 While this whole experience was a major annoyance, fortunately it did not significantly derail our trip. We had a spare ATM card from another bank, so we could have gone on indefinitely without getting the card replaced. Now that we have the spare card, it has been a great addition to my mugger’s wallet. If you aren’t familiar, a mugger’s wallet is a wallet with a small amount of cash and some expired IDs that one can happily give to a mugger. Our larger money stash and functional ATM card are hidden elsewhere on my person.

This experience left me a tad bit frustrated with Charles Schwab but I’m going to continue using their services. They provide a checking account that not only has no charges to use any ATM (in the world) and has no percentage added for foreign transactions, but even reimburses me for the fees that the ATM’s bank charges. So far on this trip it has reimbursed 36 dollars worth of fees. It’s pretty awesome to be able to use any ATM in the world and take out local currency at market rates without paying any fee whatsoever. Such a card makes the hassle and ripoff of using money changers absolutely unnecessary.

← Tropical Fruits
Vietnam: The Good, The Bad, and The Quirky →