Khmer Rouge. Pol Pot. I had heard these words before. I knew the Khmer Rouge was a brutal dictatorship; I knew that Pol Pot was its leader. I even had vague recollections of the Khmer Rouge being responsible for mass killings. I didn’t know just how brutal, how paranoid, how arbitrary, how vicious and how cruel the regime was. I didn’t know that their combination of murder and disastrous social policies resulted in the death of approximately two million people (one fourth of the country’s population) in just 3 years. Why had I not learned more about this? In fact, I don’t think I ever heard it mentioned in school. Their genocidal reign was not an event of the distant past – it ended just over 35 years ago.

History of the Khmer Rouge

After World War 2, communist movements sprung up all over Southeast Asia. One of them would eventually evolve into the Communist Party of Kampuchea – otherwise known as the Khmer Rouge. From the late 60’s the Khmer Rouge (KR) fought an armed insurrection against the US-backed government in Cambodia. In the early 70’s they became more successful and by April 1975 they had captured Phnom Penh – the capital of Cambodia. Still reeling from its recent loss in the Vietnam war, the United States did not intervene.

The goal of the KR was to turn Cambodia into a Utopian communist agrarian state. As insane as this sounds, the steps the KR thought reasonable to accomplish this goal include:

These disastrous policies had obvious consequences. Without any knowledge in planting rice (and with the Old People – the traditional farmers – forbidden from teaching them) the yields were low and famine set in. People were forced to work at least 10 hour days with only two insufficient portions of rice per day. We heard one story of a woman hacked to death because she was found with two bananas and was accused of harvesting them without permission.

As time passed the KR became more and more paranoid. It orchestrated purges of its own ranks to try remove those it thought untrustworthy. It arrested and tortured citizens and its own members until they confessed to their crimes (read, made up crimes in order to stop being tortured) and then executed them for their “treasons”. There were no courts, no trials. If you were arrested you were already guilty since “Angkar (the KR) makes no mistakes” and arresting an innocent person would be a mistake. If an individual was found guilty of a crime, their whole family would often be arrested and executed – including children. A KR slogan: “When you dig up the grass, you must remove even the roots.” Like mentioned before, specific groups like intellectuals, those who could speak a foreign language, and even those who wore glasses were especially targeted.

In 1979 after ongoing border disputes with Vietnam, the Vietnamese successfully invaded Cambodia and removed the KR. In a detestable turn of events, because of their shared fear of the new Vietnamese-backed government in Cambodia, the U.N. gave the Khmer Rouge government-in-exile a seat in their assembly rather than the new Cambodian government! The seat was only revoked in 1993 when the Kingdom of Cambodia was restored. Many of the former KR leaders changed their alliances and still hold high positions in the government of Cambodia today. 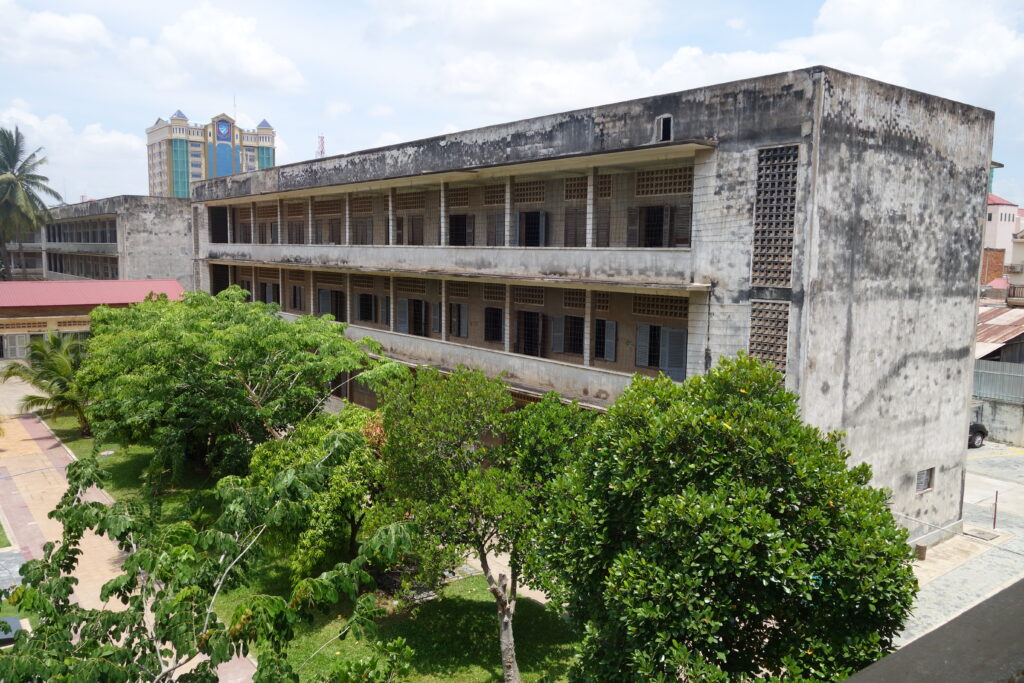 Several buildings in the prison and the courtyard connecting them.

In Phnom Penh, the Khmer Rouge had established a secret prison for what it considered enemies of the regime. The prison was known as S-21 or Tuol Sleng prison and was created through the hasty conversion of an old (and now unnecessary) high school. The site of the former prison is now a museum and we visited it during our time in Phnom Penh. Inside we were able to see the terrible conditions that the prisoners lived under. 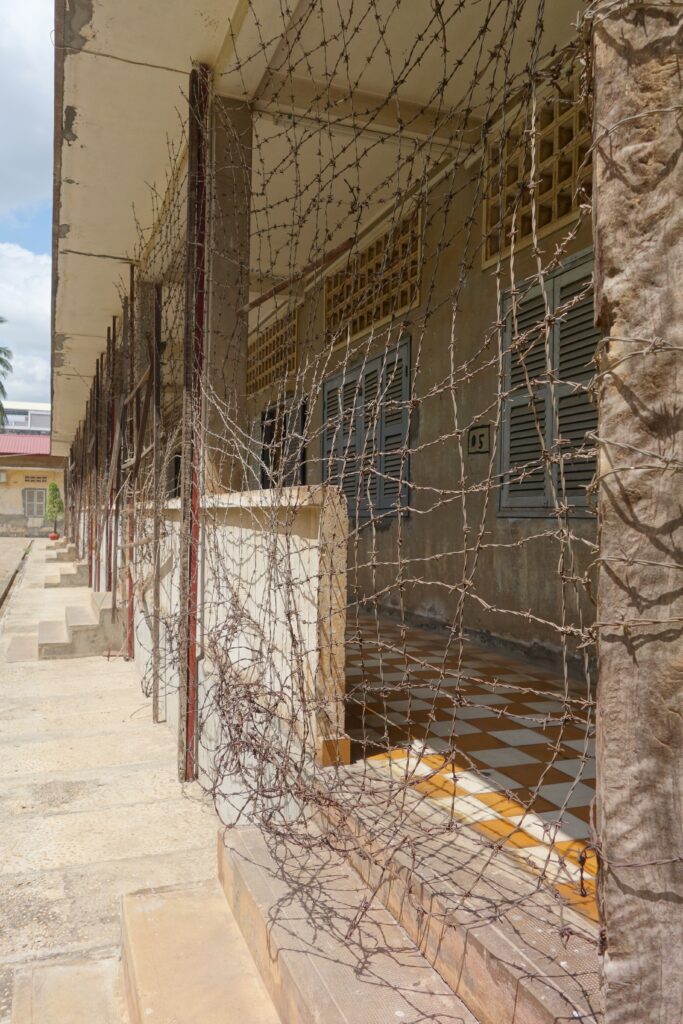 Barbed wire and razor wire kept the prisoners from escaping.

Furthermore, the prisoners were usually only kept in the prison until their continued torture extracted a confession – real or fabricated. Torture methods included waterboarding, pulling out fingernails and toenails, removing nipples with pliers, applying electric shocks, beatings, and more. Once the prisoners confessed, they would be sent to Choeung Ek, just 15km southwest of town. Choeung Ek is also known as one of the “killing fields”.

In order to carry out their envisioned rapid societal change, the KR established many mass execution sites throughout the country. Over 20,000 mass graves have been discovered in these sites since the fall of the regime and it is estimated that the remains of over 1.3 million Cambodians lie within. One of those is Choeung Ek killing field near Phnom Penh. It was here that prisoners were taken from Toul Sleng prison to be executed. Since bullets are expensive, the prisoners would be lined up near a fresh dug mass grave and then hacked to death with shovels, machetes, hammers, bamboo sticks, or whatever other implements their captors had at their disposal. Often this led to victims being buried alive. 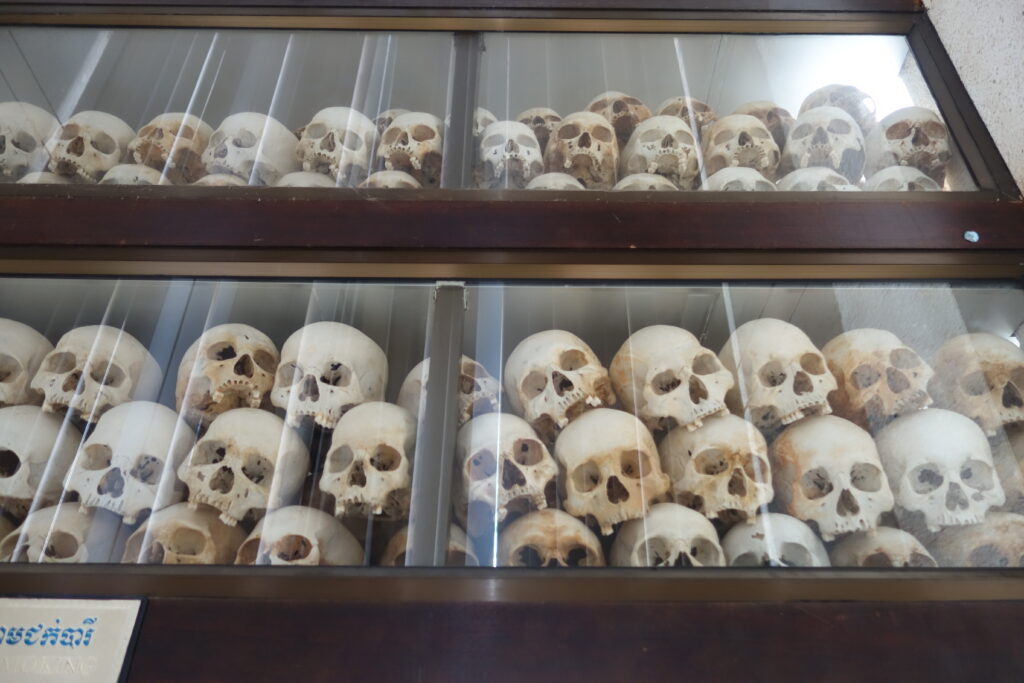 Skulls of the victims are visible at the mausoleum that was built on the site. Many of the skulls have obvious fractures of different shapes (not visible in this photo). There are stickers that show which implement was used to kill them.

The Choeung Ek location had approximately 180 mass graves. The site was discovered very shortly after the fall of the KR. So shortly in fact, that one of the first people on the site noticed a tree coated with blood, skin, and brain matter. I know it sounds too exaggeratedly evil to be true, but when the grave next to it was excavated it was found full of baby skeletons. It turns out the KR soldiers were holding babies by their legs and smashing their heads against the tree before disposing of them in the mass grave.

Another pit was found full of women and unlike in other pits where the bodies were found still clothed, in this pit the bodies were all nude – indicating they had been sexually assaulted before being murdered. 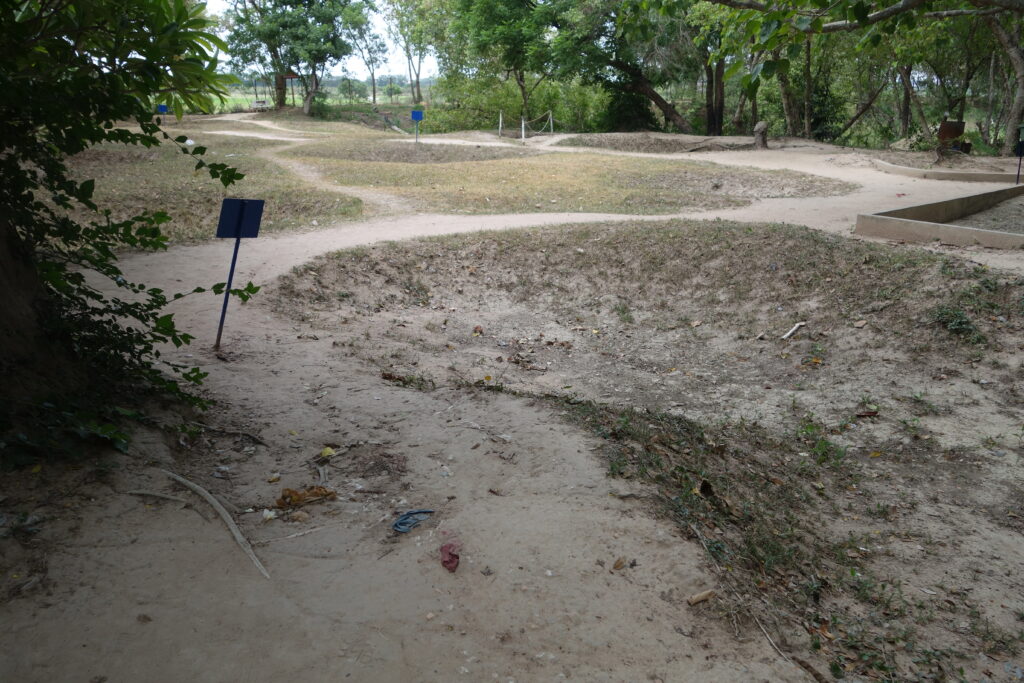 Most of the pits were excavated and the remains autopsied; though a few dozen were left to let the victims lie in peace. After the autopsies, the skeletal remains were placed in a mausoleum on the site designed to house them. 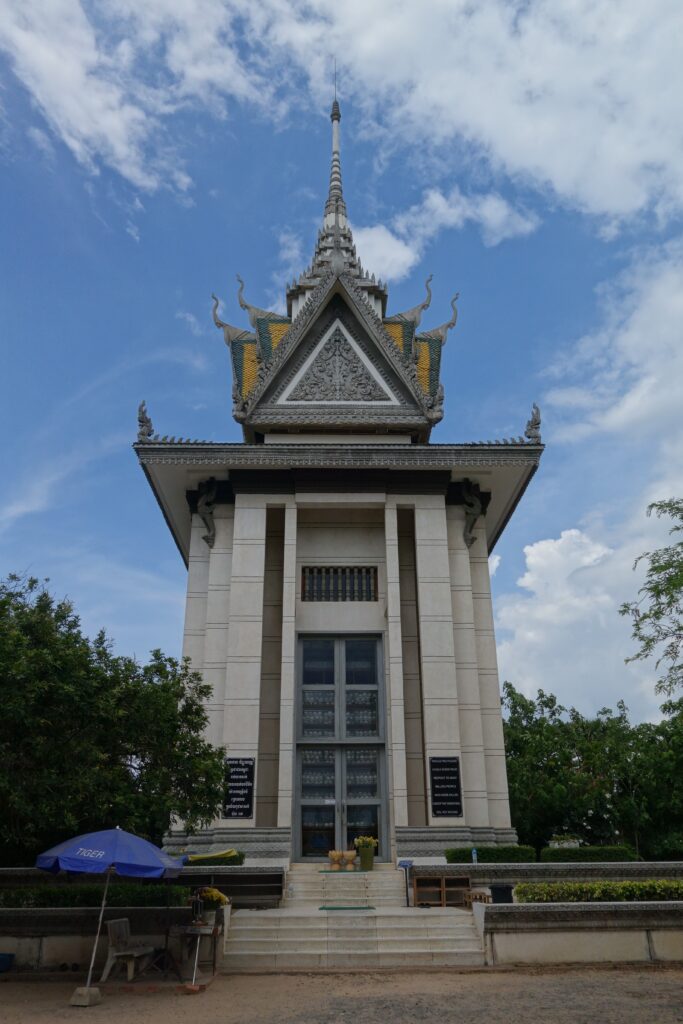 We had read before going to the site that clothes and bone fragments were visible in the ground (the rainy season helps the material migrate to the surface) but I thought that must be an exaggeration. Indeed, clothing is visible throughout the site and at several places skeletal remains are also visible. 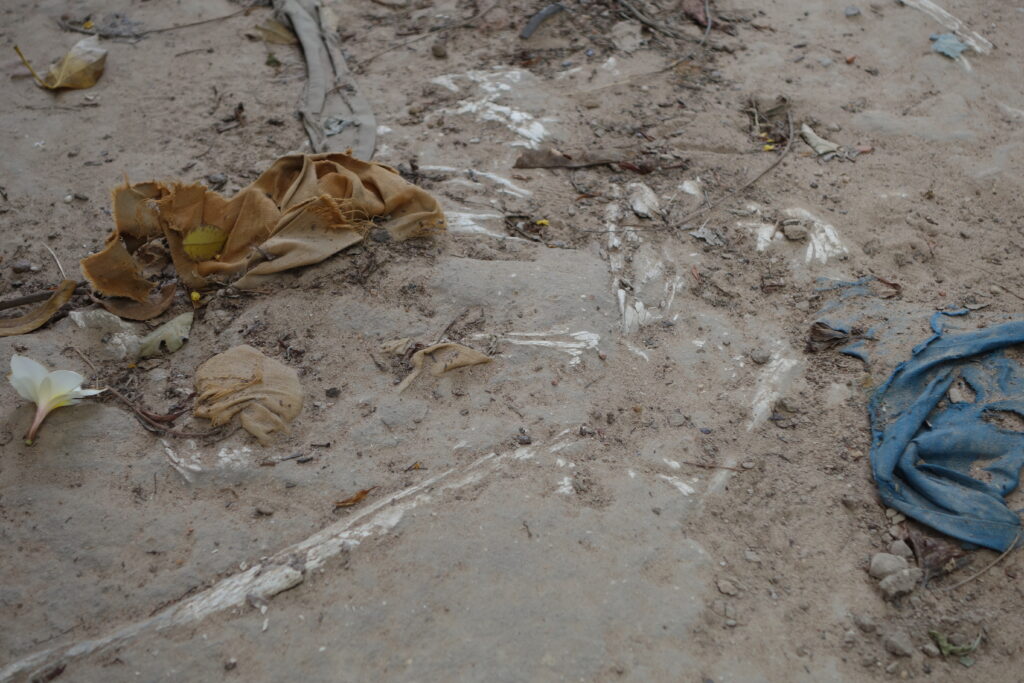 Clothing and bones visible in the soil.

what happened during the Khmer Rouge were happening today? Imagine a regime that incarcerated people for life, or executed them, for being political dissidents? Imagine if their entire families were also assumed guilty by association and incarcerated for life. If even children born in the camps and their children were also incarcerated for life. Or not just incarcerated, but fed meager rations and forced to work to the point of exhaustion and death from starvation. Imagine if in addition to the grueling work they were regularly and arbitrarily tortured, beaten, and executed. Would the world sit back and do nothing? Would we allow such crimes against humanity today?

It turns out we do. North Korea is guilty of all the same crimes as the Khmer Rouge, and perhaps even worse crimes. Approximately 200,000 people are currently incarcerated in concentration camps in North Korea under the “hypothetical” circumstances I described above. Guards are instructed to think of the prisoners as sub-human slaves and have the authority to execute prisoners on site for any reason. It’s estimated over 10,000 people die each year and that at least 400,000 people have died in the camps in the last forty years. Just read about the conditions in one particular camp as told by a former guard. Conditions equivalent to the holocaust and Cambodian genocide are happening right now and all the world does is wring its hands and write scathing reports. The state that commits such horrors is not recognized as the embodiment of evil, but a joke.

When the state of North Korea eventually fails I suspect the evidence that surfaces will show that the country was the location of some of the most atrocious crimes ever committed. Let’s hope that happens sooner rather than later.

← Vietnam: The Good, The Bad, and The Quirky
The Bus Scam →