Malaysia is a multi-ethnic and multicultural melting pot. Its citizens are primarily Malay (Malaysian Muslim – a loosely defined term), Chinese, Indian, and Indigenous. The country has been a trade hub since its very beginning and with the arrival of Indian, Chinese, and Arab traders came Hinduism, Buddhism, and Islam.

Kuala Lumpur was the first place we have been where you could see a Muslim mosque, Hindu temple, Chinese temple, and a Christian church all within the same block. 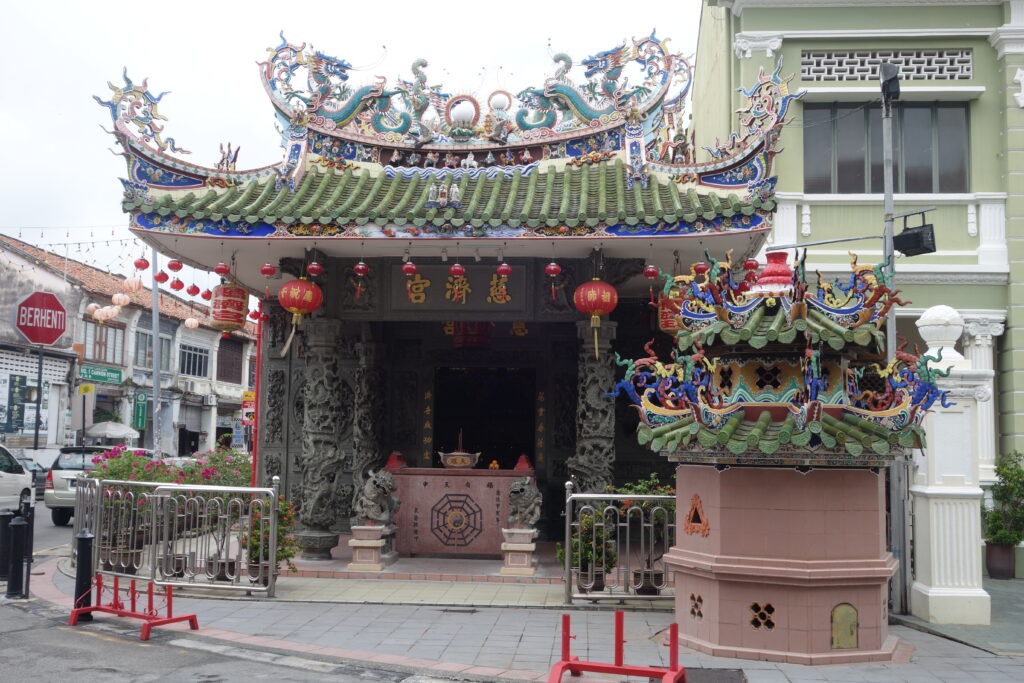 A Chinese temple in Penang. 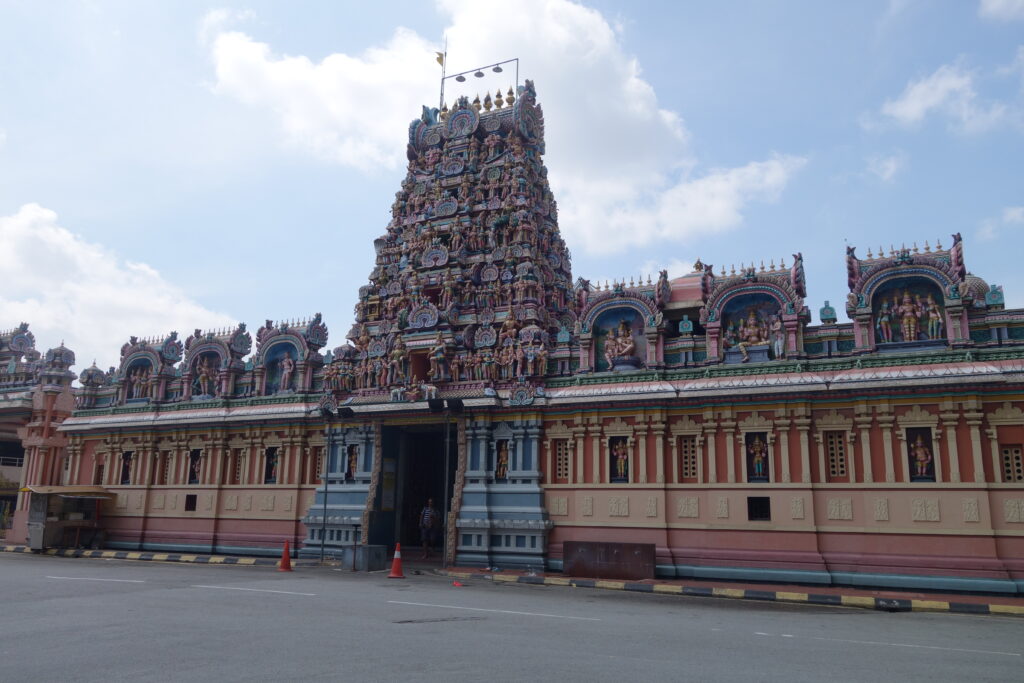 A Hindu temple in KL. 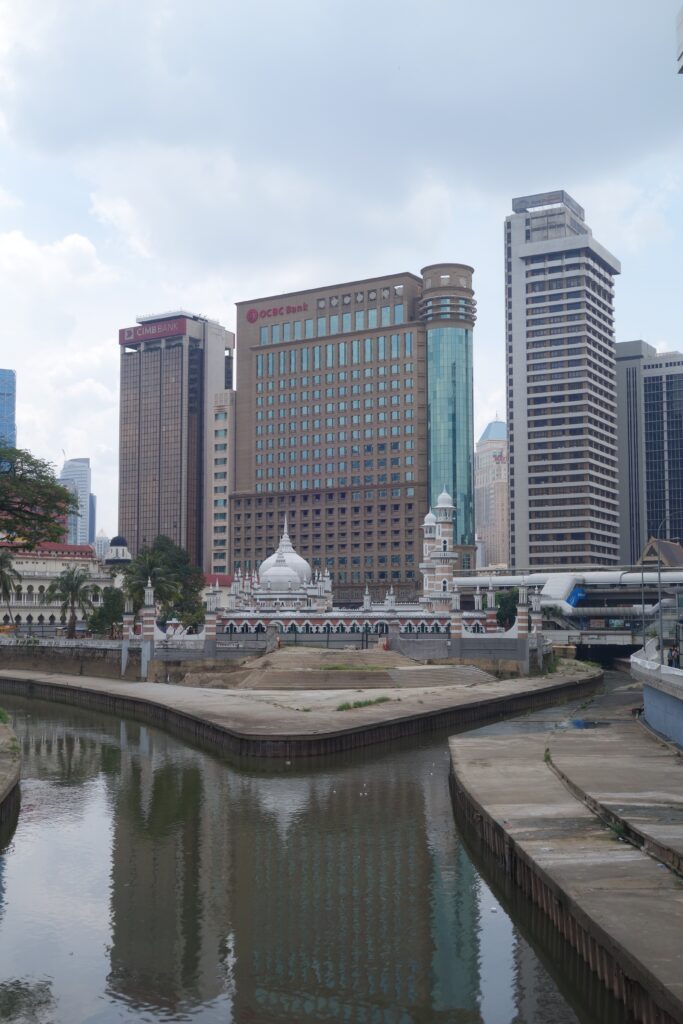 A Muslim mosque in KL.

Being the first area we have visited with a Muslim presence, and also being in Kuala Lumpur during the Eid festival (essentially Islam’s equivalent to Christmas – but only insofar as the festivities are concerned), we saw many women wearing a hijab and many families dressed in traditional Muslim outfits. We learned that as part of the celebration of Eid, a family will go out and buy new clothing to be worn on the first day of the release from fasting (the end of Ramadan). It was really cute because many families would have matching or complementary clothing. 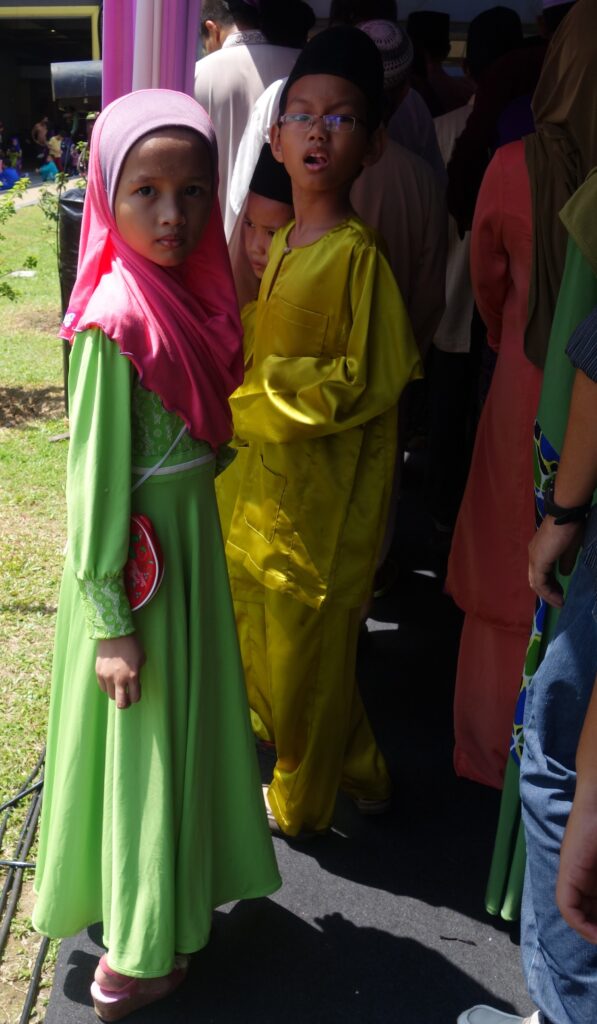 The children in front of us in line. 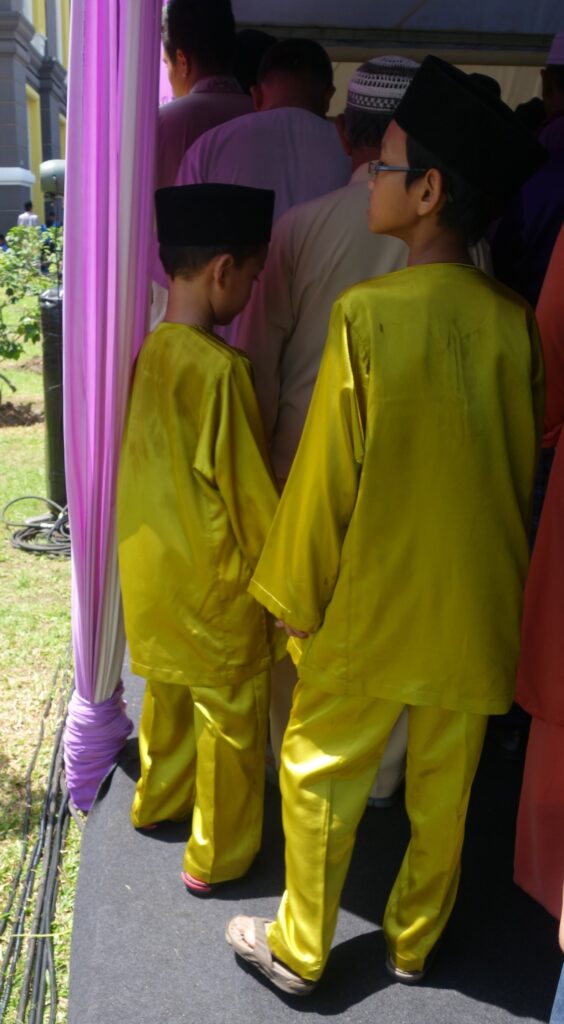 The royal palace in KL had an “open house” for the festival which we attended. There, we were fed a free buffet lunch and treated to traditional live music. We also waited in a very, very long line to enter the palace (so we thought). It turned out to be a line to shake the hands of some members of the royal family and get a complementary box of chocolates. Perhaps we misunderstood what an “open house” meant? Either way, it was fun to be a part of the celebration! 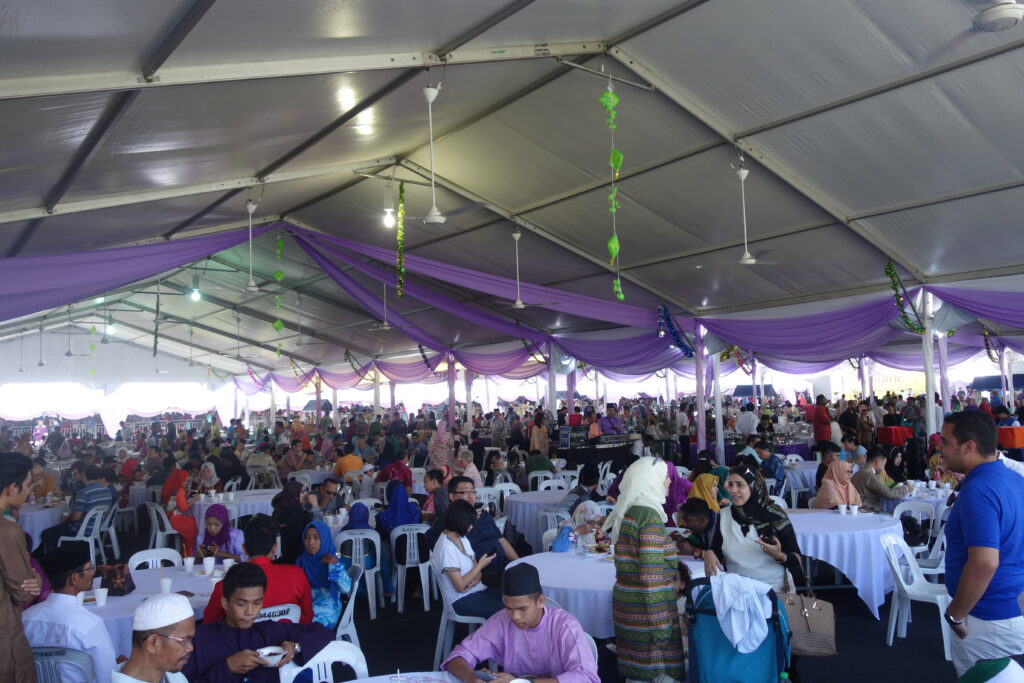 Another striking characteristic of Malaysia was its ethnic enclaves. Little India and Chinatown neighborhoods throughout the country were very large and well established. Specifically in KL, when we were in the Little India subway station, the entire (large) station was full of ethnic Indians. 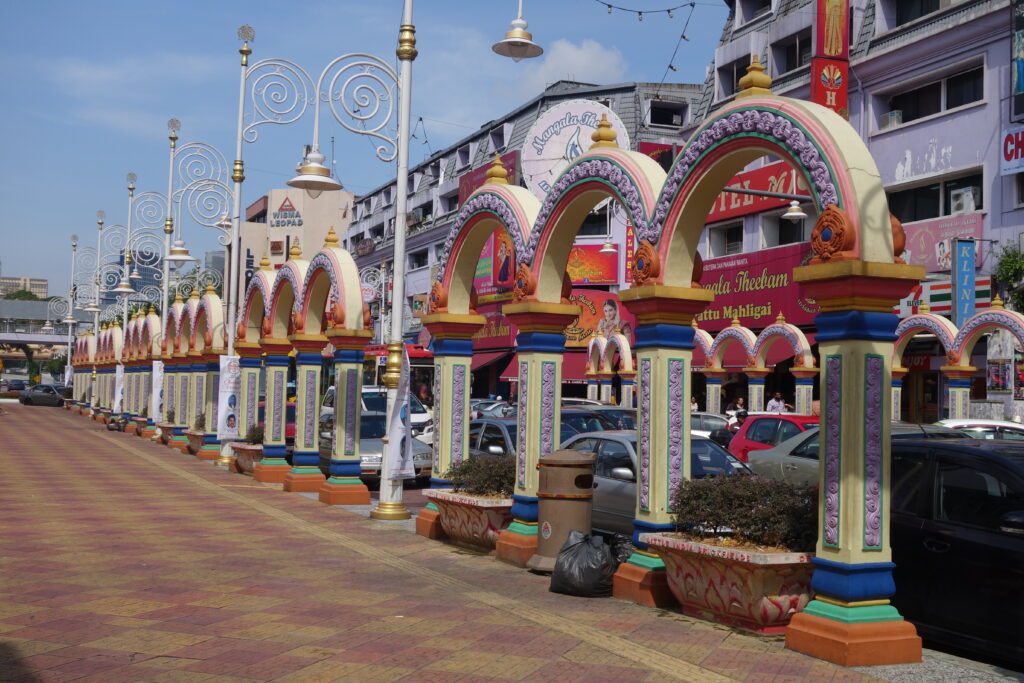 In Penang, we saw a few clan homes, which were centers of social activities for Chinese immigrants who shared a surname. The Khoo Kongsi is the best known in the country because of its grandeur. 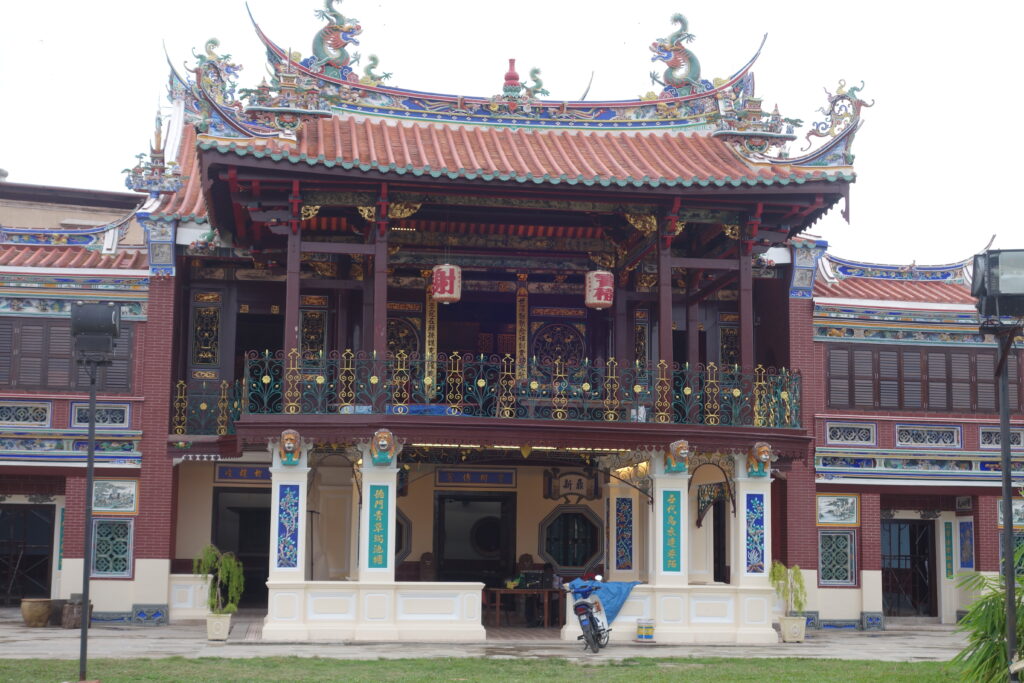 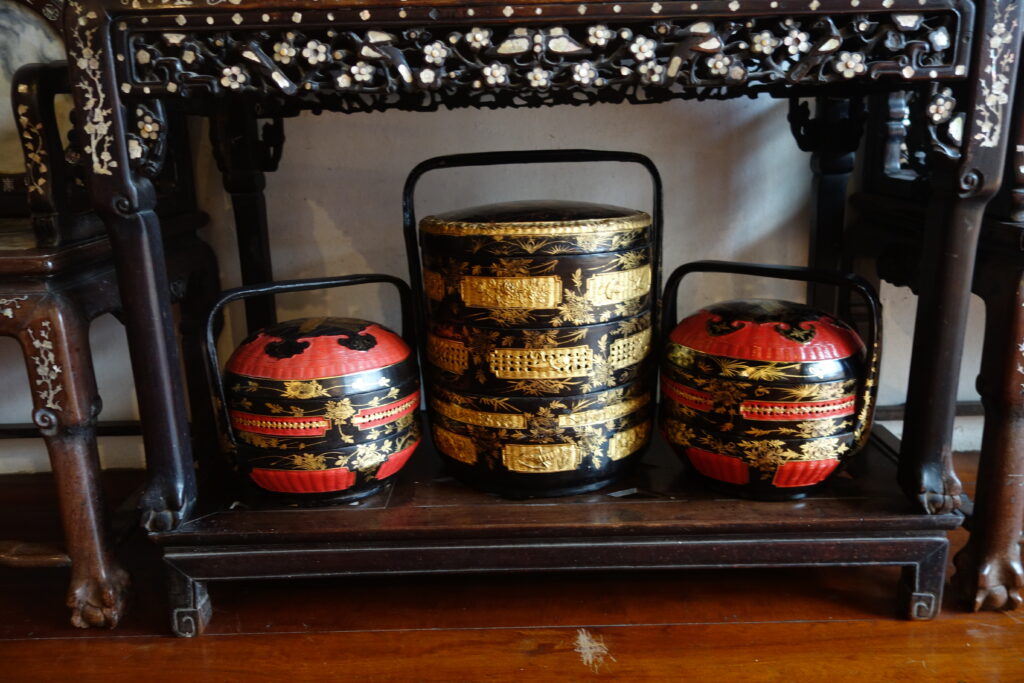 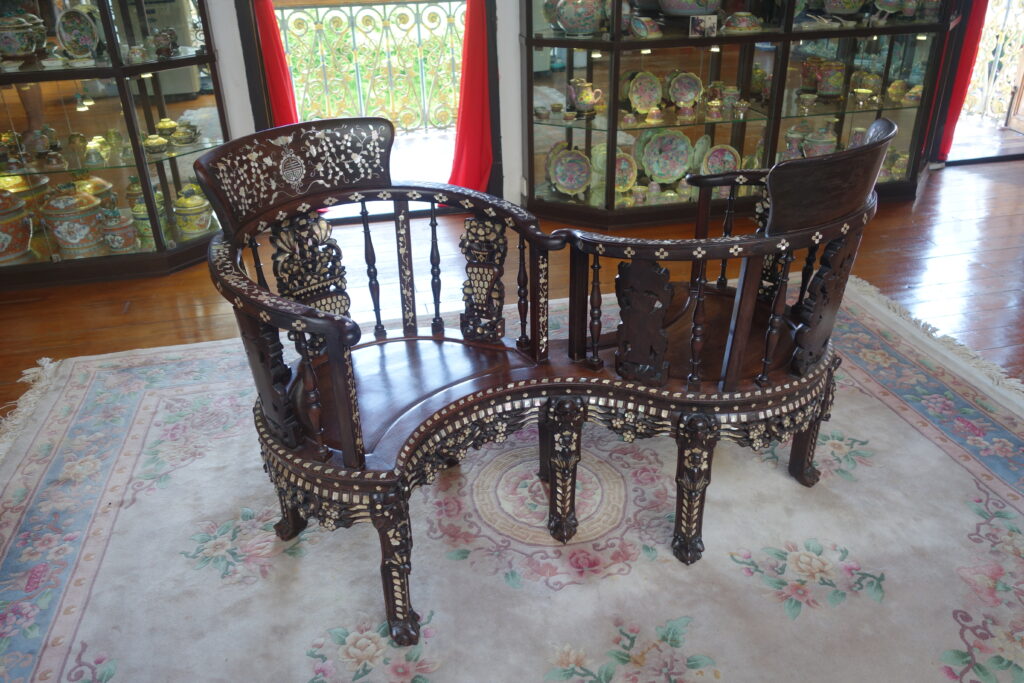 A mother of pearl inlet chair in the Penang Peranakan Mansion.

Along the coast, we visited a few clan jetties, where each jettie was named after a common surname. Groups of Chinese immigrants who shared common historical, geographical and lineal descent would live as neighbors on one jettie. 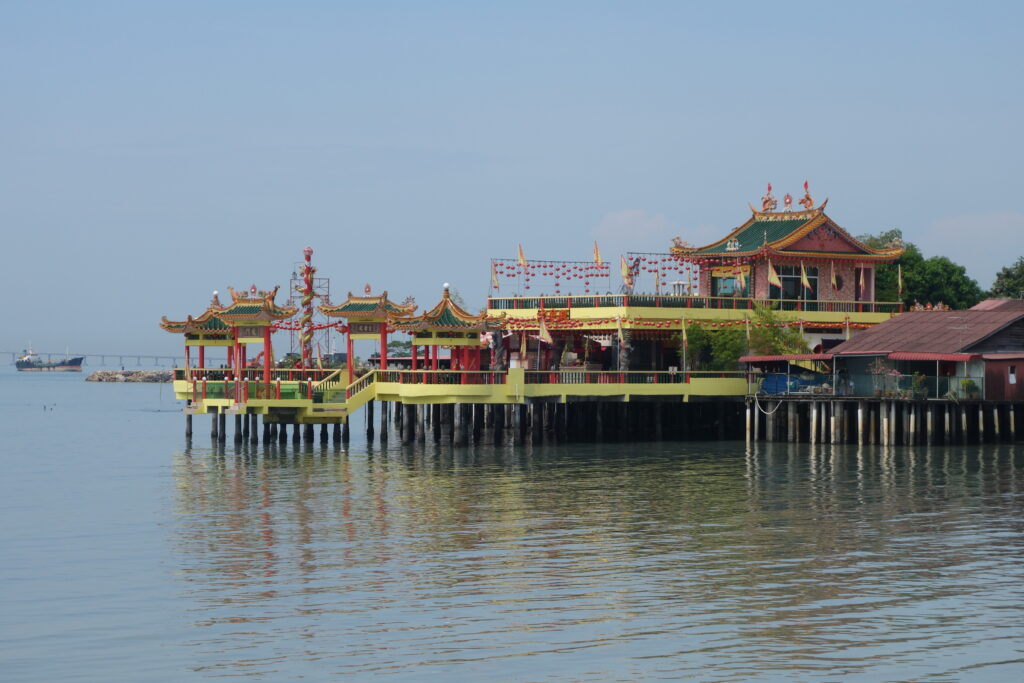 One of the clan jetties in Penang. 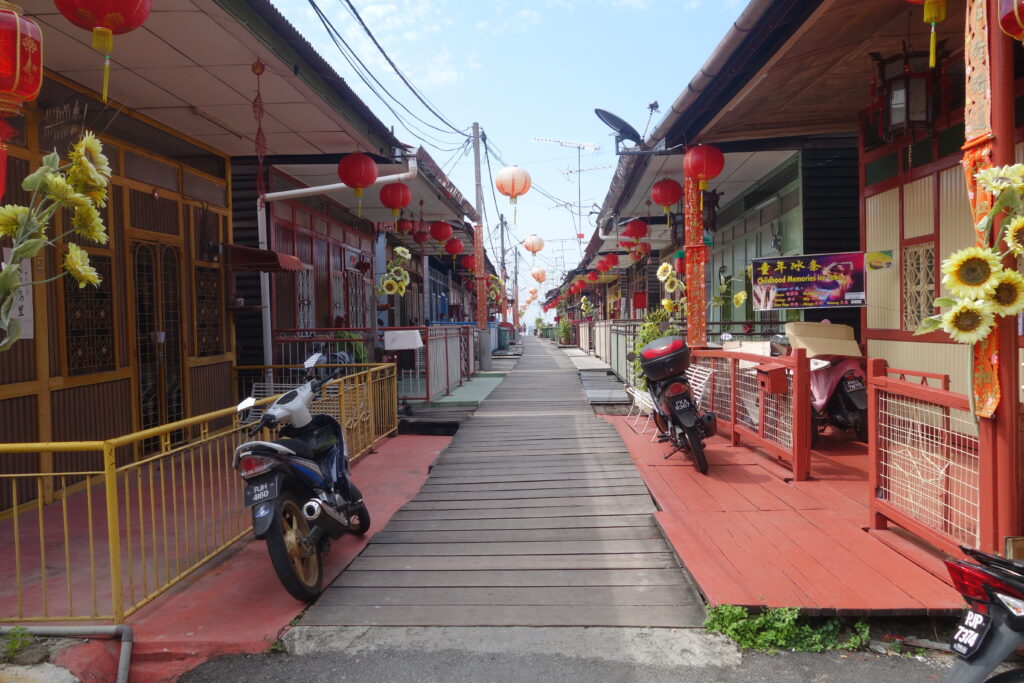 We enjoyed the Chinese, Indian, and Malay cuisine, particularly in Penang – known as the food capital of Malaysia. One fun aspect of the food culture is that open-air food courts are very common. The portions are small and cheap, so a person can order a little of this and that from different vendors and build their own meal. 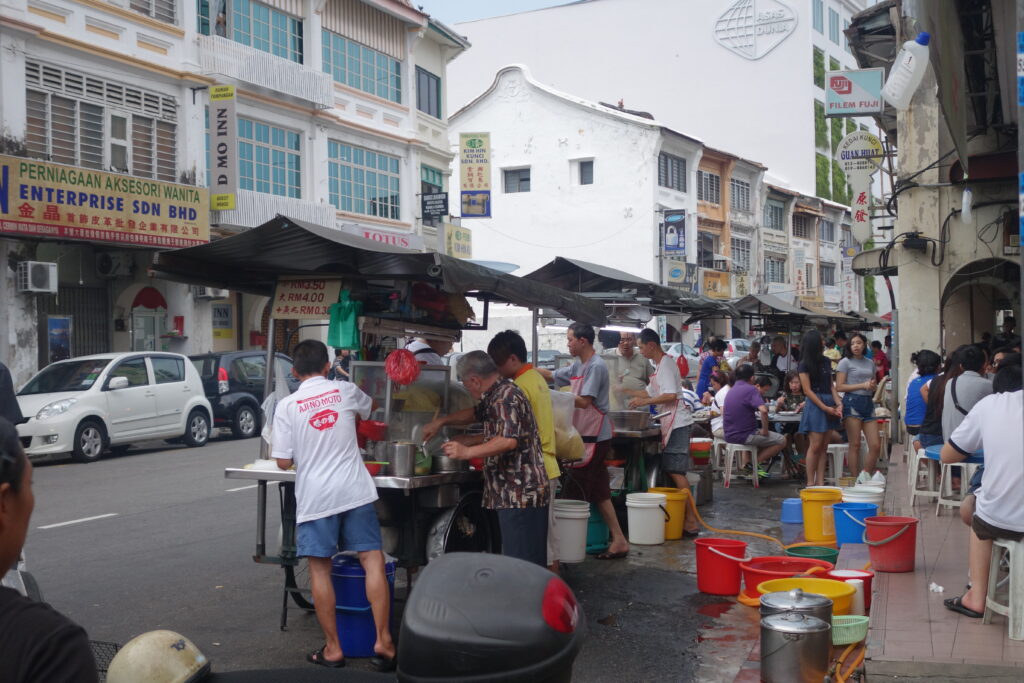 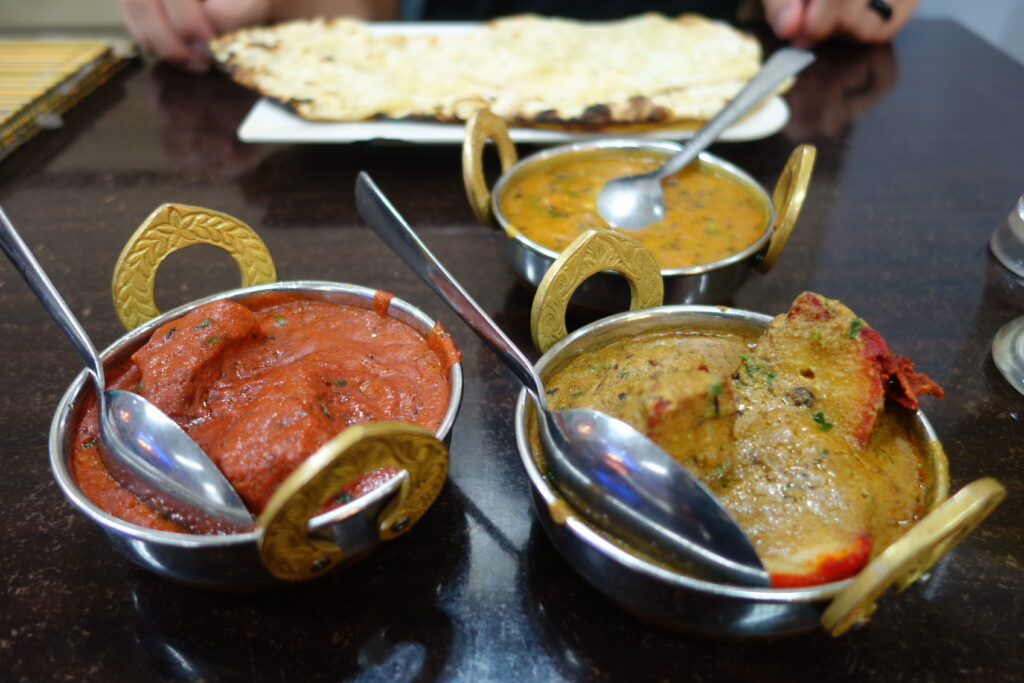 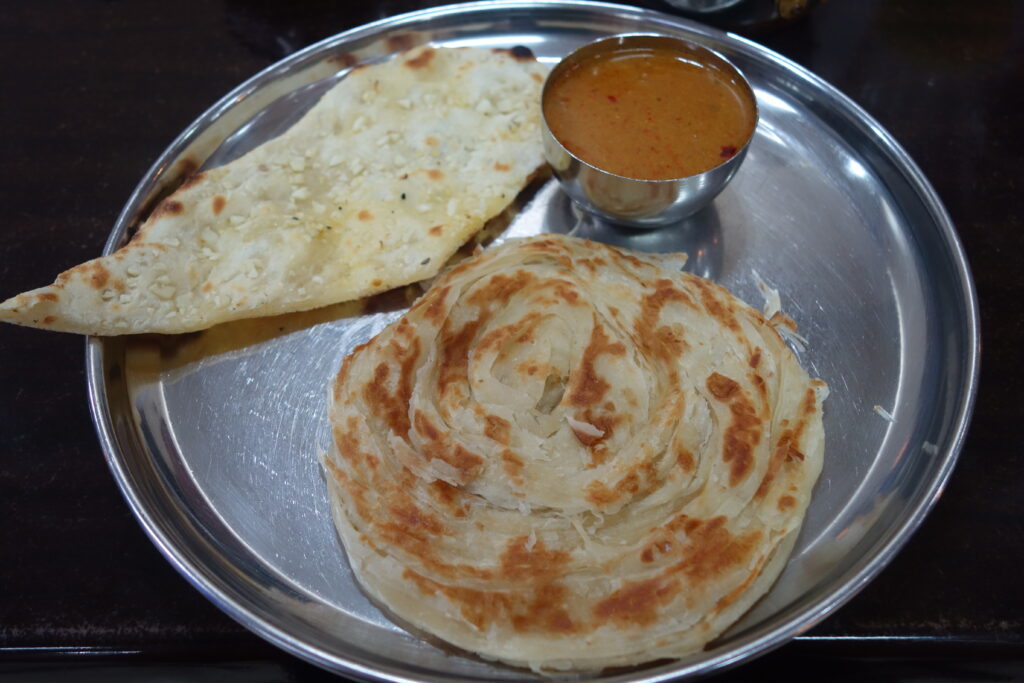 Roti and naan served with a small portion of curry for dipping. 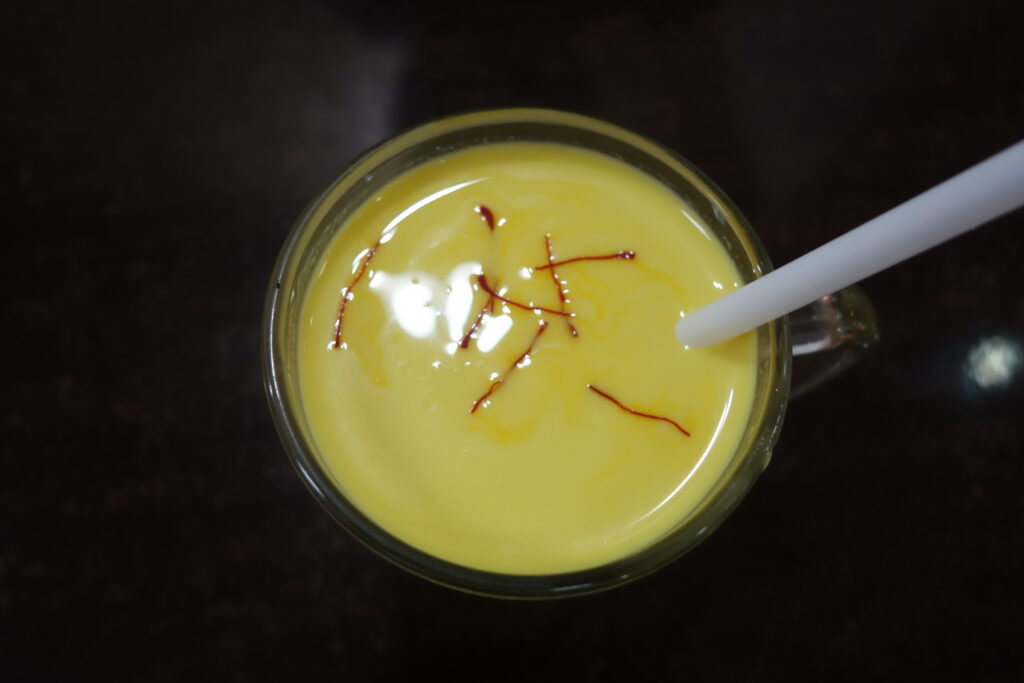 Badam: An Indian drink consisting of almond milk and saffron. Possibly the most delicious thing ever? 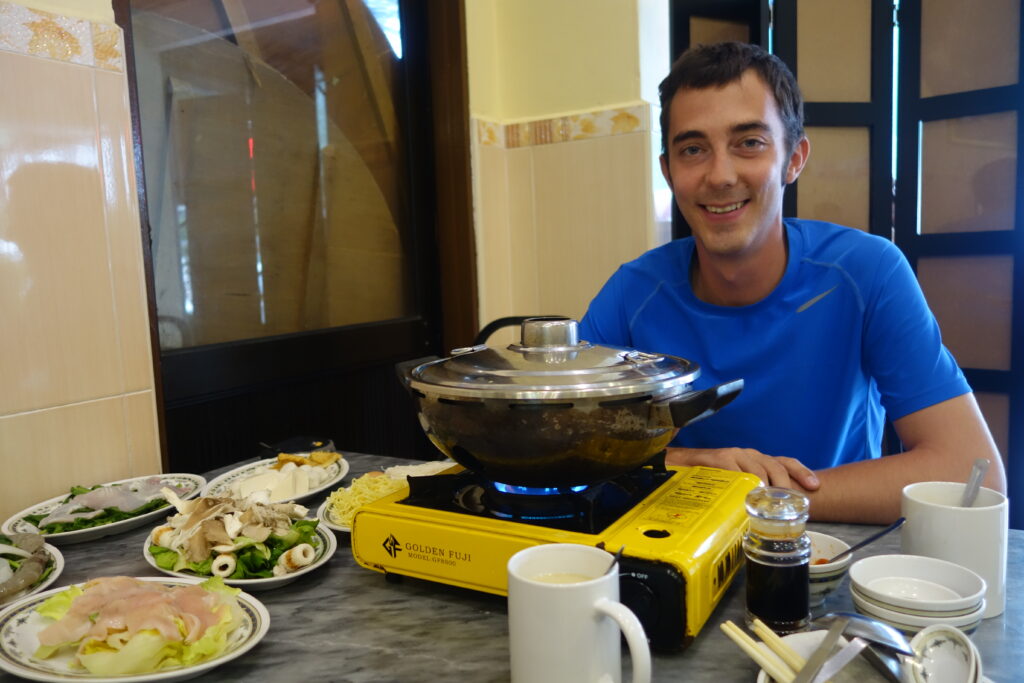 A Chinese steamboat. Basically a build your own soup, where you add ingredients to the broth, allow them to cook, eat, and then repeat. 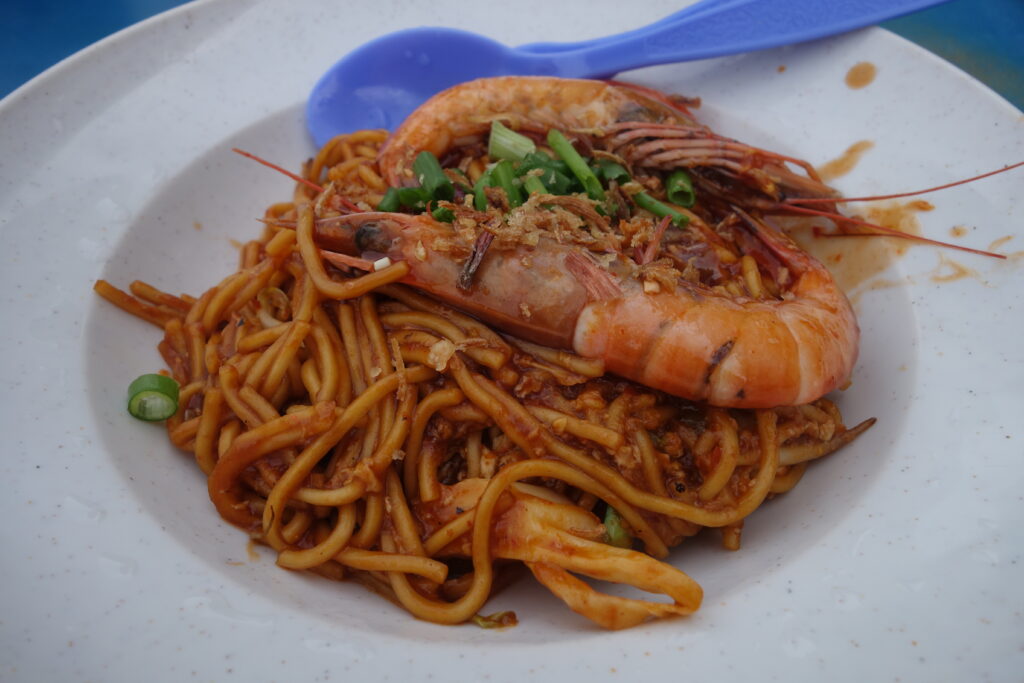 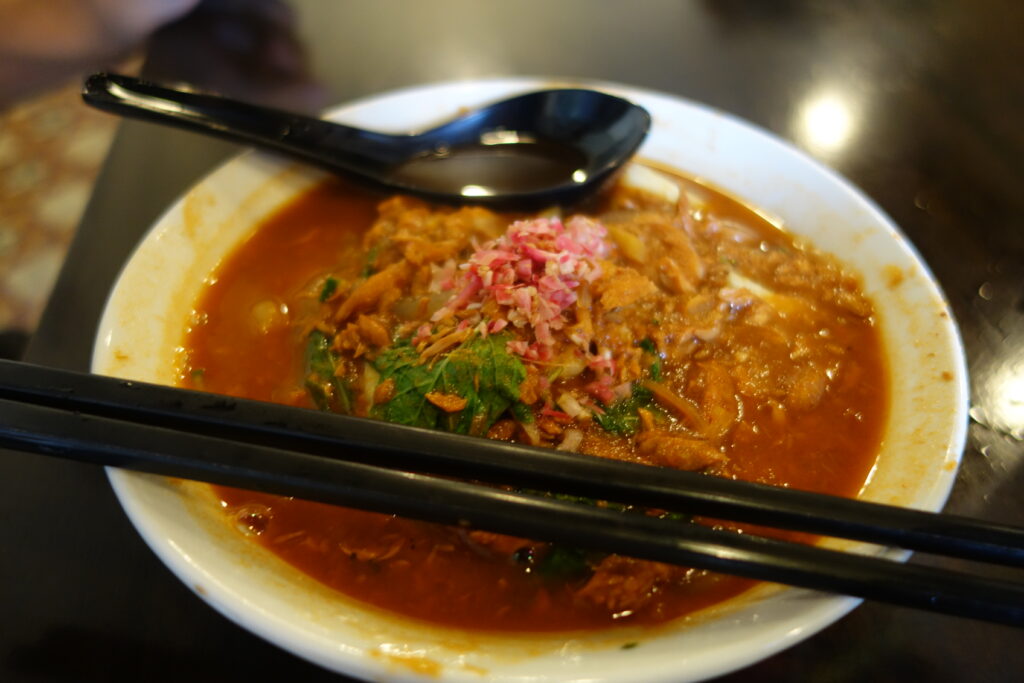 Penang Assam Laksa, a signature dish of Penang. It is sweet, savory, sour, spicy, fishy, and fresh! This dish was included in CNN’s 50 most delicious foods in the world in 2011 and we think it belongs there!

One interesting aspect of the drink culture was the popularity of “white coffee”  White coffee is produced by roasting the coffee beans with palm oil margarine and serving the coffee with condensed milk. This style of production originated in Malaysia and has been popular since the 19th century. Currently, most restaurants and cafes sell the instant version – a prepackaged mixture of instant white coffee powder, sugar, and non-dairy creamer. In particular, durian flavored “white coffee” is quite popular. (The durian fruit was first cultivated in Malaysia where it is now essentially the national fruit. There are even all-you-can-eat durian buffets in Penang!) It is almost impossible to find regular (non-instant) coffee! 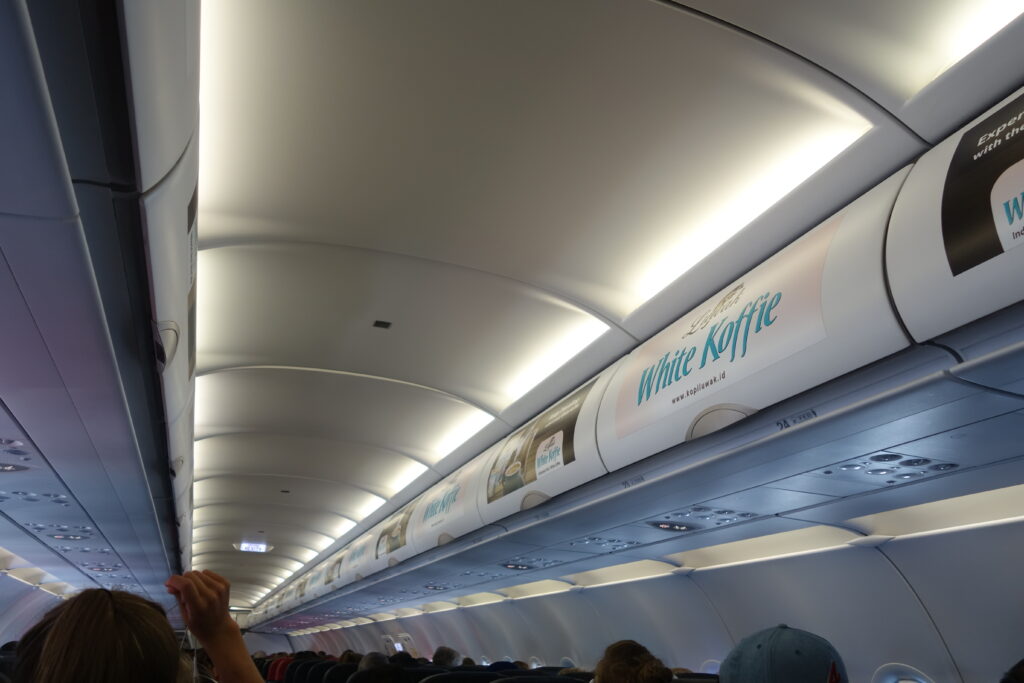 Our Malaysian airline was walpapered with advertisements for white coffee.

Tea is even more popular than coffee in Malaysia and is grown in the highlands. We visited the Boh tea plantation in the Cameron Highlands where we saw the manufacturing process and admired the teascape. 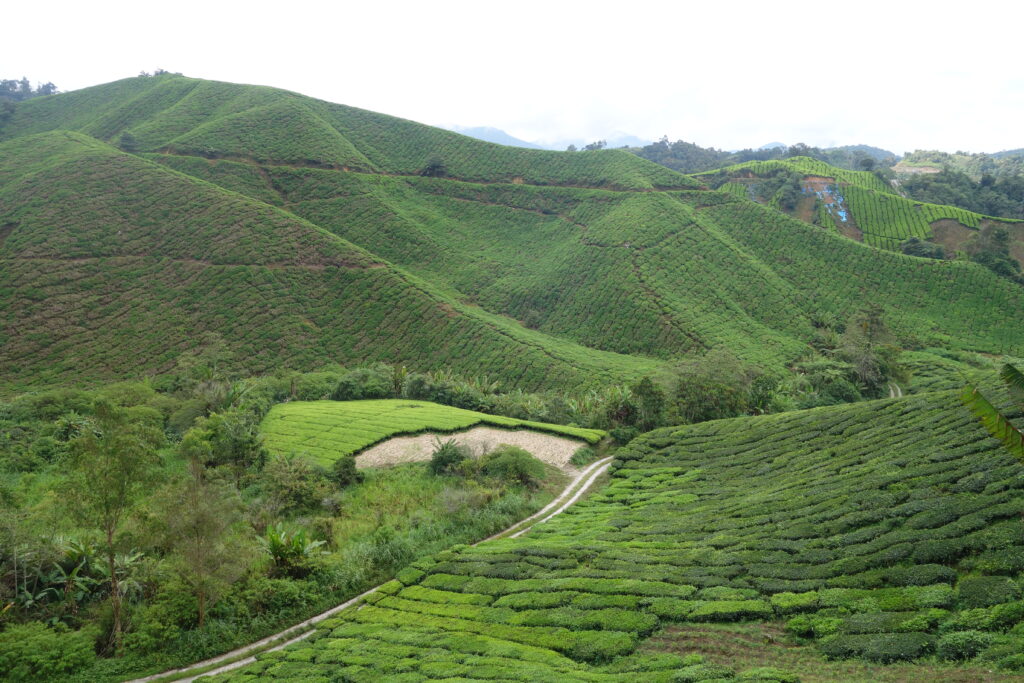 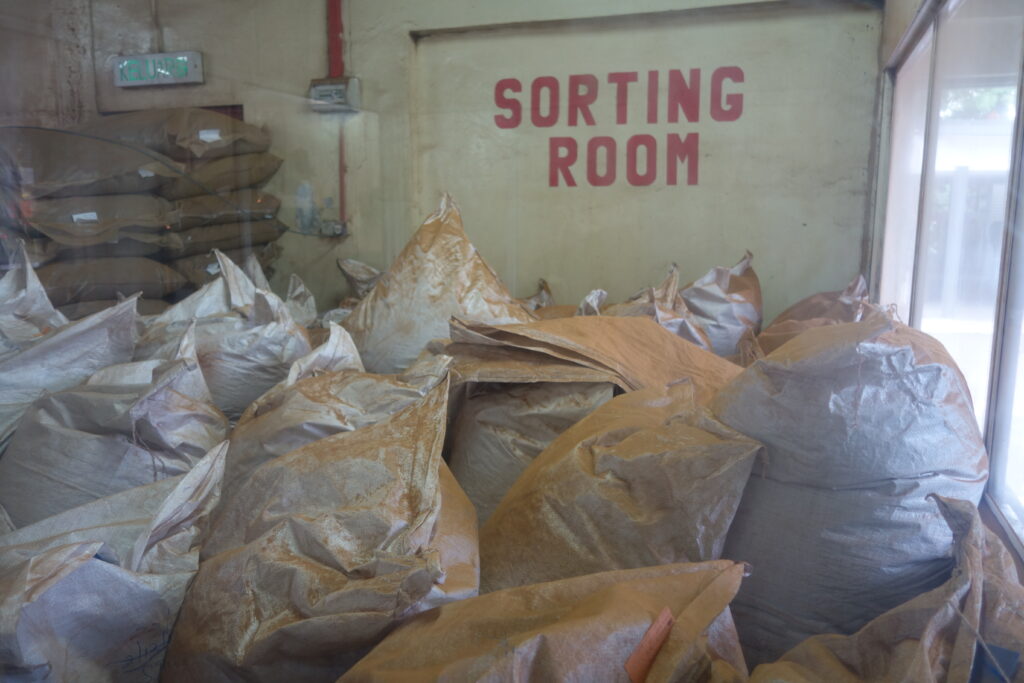 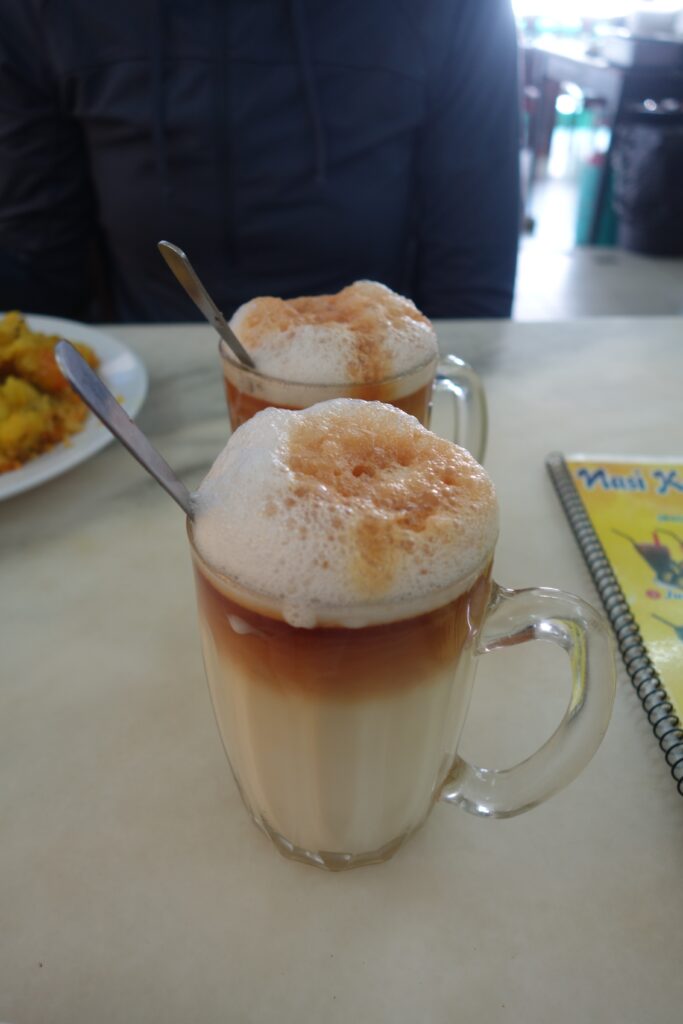 The tea is very strong and astringent, so it is served with lots of milk and sugar!

Malaysia was a fun and unique place to sample different cultures and cuisines. Now that we have had a taste of the Indian food in this part of the world, we are hooked and ready for more!

← Best and worst?
Singapore: Disneyland with the Death Penalty →