As a write this, I’m sitting just meters away from the ocean on one of the most beautiful beaches I’ve ever seen. 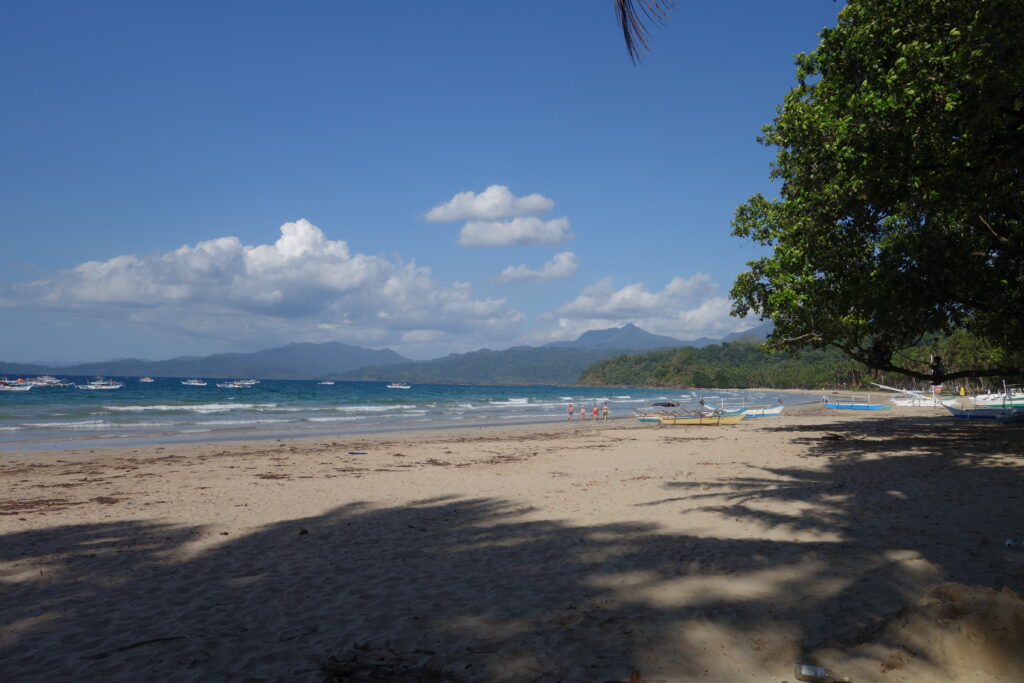 The water is about 28 degrees Celsius (82 Fahrenheit), there are mountains in the distance, our lodging is a hut less than 50 meters from the ocean, there are very few tourists, and it only costs 500 Philippine pesos (~11 USD) a night – and it comes with breakfast. Just a few kilometers down the coast is the underground river – a UNESCO world heritage site and a pretty cool thing to see. Eating at a restaurant costs between 1 and 3 dollars per person.

I don’t describe all of this to brag, but because it is necessary for me to discuss what I’ve been thinking a lot lately – something I’ve called “travelers’ guilt” when talking about it with Amy. When I Google that term I get different people using it to describe different things – which I think gives me to liberty to redefine it the way I want.

You may be guessing what I mean by “traveler’s guilt” and perhaps you think I feel guilty about being in such a beautiful place. Or feel something akin to survivors guilt – “why is it me that gets to be here and not someone else”? This is not what I mean by traveler’s guilt. I find it easier to explain what I mean with some examples than with an immediate definition:

For us, as solo backpackers (not on any organized tours) a large part of our decision making in choosing where to travel is how touristy a place is. We want to get “off the beaten path” – to see life as it is for locals, to see areas that haven’t had their shantytowns replaced with condominiums or their beach side shacks replaced with beach side resorts. Over time, too many tourists can ruin the authenticity of a place and its atmosphere and change its culture. The restaurants stop serving local dishes and start serving “international fare” (read, fish & chips and hamburgers). Apparently the vast majority of international tourists only want to experience the scenery and not the local food or culture.

We try really hard to not contribute to these problems when we travel. (Though it is worth noting that many travelers would not see these changes as problems at all.) We eat at local restaurants, try to learn some local language, stay at locally owned lodgings, and try not to act in culturally inappropriate ways. In the words of James Michener, “If you reject the food, ignore the customs, fear the religion and avoid the people, you might better stay at home.” As hard as I try to not contribute to the touristification of a place, I can’t help a lingering guilt. Is my presence not damaging? The irony is not lost on me that by trying to see areas unspoiled by tourists, I am, by my very presence, spoiling them.

Amy and I gain a lot by seeing the world. We’ll come home having changed for the better, more wise, more culturally sensitive, and more worldly people. But can we say the same for the places that we visited? Have we left them in a better state? Economically yes, but in all other ways?

We recently spent several days trekking between remote mountain towns in the Philippine Cordilleras. The scenery was a breathtaking patchwork of ancient rice terraces, constructed over generations, with local mountain tribe people planting rice as we walked by.

A view of the rice terraces in between Cambulo and Pula.

It was one of the most beautiful places I’ve ever seen. One small town we stayed at (Pula) only had one guesthouse. There were no signs on the guesthouse, no restaurants, no anything remotely western. We had arrived. It was here I felt the most profound sense of traveler’s guilt. Was my presence not a threat to the existence of this place – at least in the state it was in? Does not our presence, and the presence of the few other young backpackers like us we encountered on the trail, encourage locals to open new guesthouses?

As I swam in the river in Cambulo (another slightly more tourist visited town on the trek than Pula) I watched local farmers transplanting rice as I relaxed in the river. How is this fair? That I can come to their beautiful paradise and relax, while they have to work? Where they could never possibly afford to travel far in their own country, let alone to others? My presence forces them to consider these inequalities and to compare their lot in life to mine.

Would Cambulo be better without me? The more I wrestle with the question, the more I feel it would.

In the third of the three mountain towns we trekked through, Batad, there has been a decent amount of tourism and there are several inns and restaurants catering to tourists. At dinner one night I asked Ramon (the owner of Ramon’s Inn and Restaurant) what the locals think of the tourists. He didn’t lie – the farmers are not so fond of tourists. Can I blame them? What do they gain? How do they feel having tourists pass by observing them and the local culture as if they are animals in a zoo? We didn’t take any pictures of them in order to do our best not to contribute to this, but are we not still guilty of it? On the other hand, Ramon acknowledges that he certainly appreciates tourists visiting. Our presence is economically helpful, but culturally harmful. 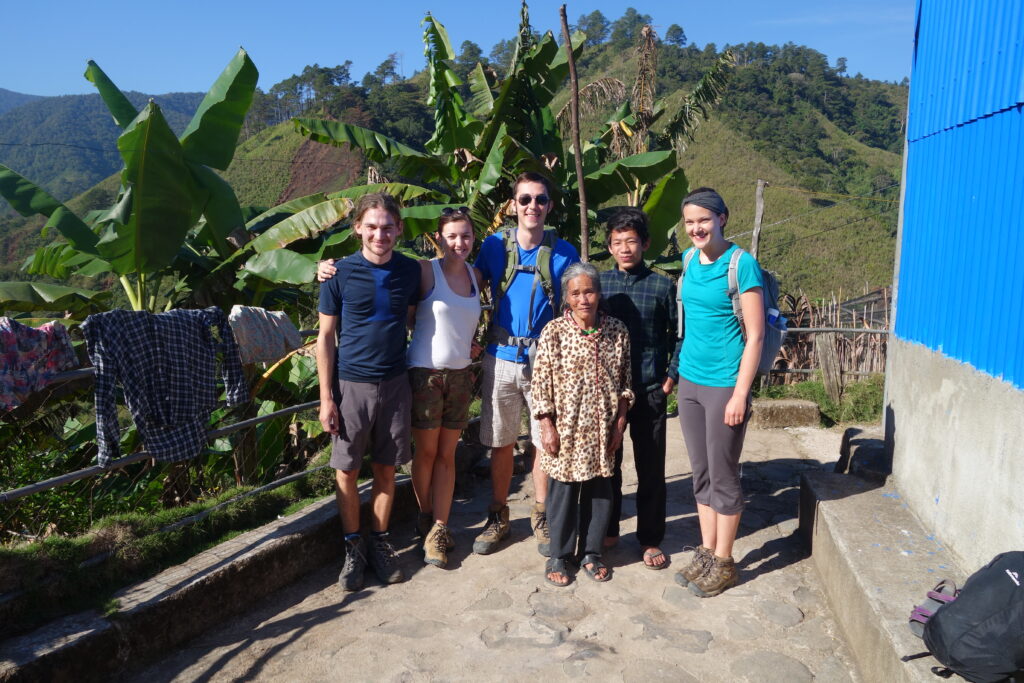 We do have one photo with a local – we asked our guesthouse host in Pula if she minded taking a picture with us. (Her grandson joined in as well.) On the left are Lubos and Barbora, two good friends we made on the road who did the Cordilleras trek with us.

David Foster Wallace summarizes all these ideas so succinctly (and soul crushingly) in a footnote in Consider the Lobster, “To be a mass tourist, for me, is to become a pure late-date American: alien, ignorant, greedy for something you cannot ever have, disappointed in a way you can never admit. It is to spoil, by way of sheer ontology, the very unspoiledness you are there to experience. It is to impose yourself on places that in all noneconomic ways would be better, realer, without you. It is, in lines and gridlock and transaction after transaction, to confront a dimension of yourself that is as inescapable as it is painful: As a tourist, you become economically significant but existentially loathsome, an insect on a dead thing.”

Is all of this just so much liberal hand wringing? Should I stop trying to visit the places unspoiled by tourists, or should I just push this guilt away into my subconscious? I feel like trying to convince myself that my presence is not harmful is just an attempt at rationalization.

It’s worth pointing out that I don’t feel this way in major tourist destinations. Those cities have already changed and our presence doesn’t make it worse. Furthermore, larger cities are necessarily more cosmopolitan and therefore don’t have as much “local culture” to be lost.

I also don’t feel this way when we go somewhere completely unique – like when we stayed with our Couchsurfing host in Pateros, Manila. One western couple in an area that virtually never sees westerners will not change anything. It is only the places small enough, and with enough tourists, that the presence of each tourist adds ever so slightly to the threat. Unfortunately, these are exactly the types of places that a majority of tourists find the most desirable to see.

As we are still traveling I’ll continue to wrestle with this and post again if I come to any meaningful conclusions. As we continue onward, the one bit of the DFW quote that keeps replaying in my head is, “economically significant but existentially loathsome.” How depressing.