This is the story of the most organized scam I have ever witnessed. Even a robed Buddhist monk passively participated!

There is a local bus from Da Nang to Hội An in Vietnam that is infamous for scamming tourists. The Trip Advisor forum page about the bus (and the corresponding scam) is 11 pages long! Fortunately we usually plan our travel days well, so we knew what to expect. There are three ways to get to Hoi An from Da Nang:

You can guess which option we took. We had read that the bus conductor will tell you the fare is 50,000 đồng (roughly 2.5 times the actual cost) or even 100,000 đồng if you look particularly gullible. We had also read that you should refuse to pay unless you are issued a ticket – if you aren’t issued a ticked then the conductor can just keep the money and pretend you were never on the bus.

It didn’t take long for the conductor to come around and demand 50,000 đồng from us (about two dollars and fifty cents). I told him that we would happily pay, but we needed him to issue us the tickets first. He kept insisting that there was no ticket and that we pay 50,000 đồng each. So I showed him an image of the ticket that I had saved on my phone.

The ticket we should have been issued. You can clearly see the fare printed on it.

Confronted with the information that we knew with certainty what the true fare was, I thought he would give up the scam. Nope! At this point he lowered his asking price to 30,000 đồng.

I simply kept refusing to pay until he issued a ticket. Every two or three minutes he would walk over and ask for the fare, I would say “ticket” and then he would give me a nasty look and walk away again. After about 10 minutes of the back and forth, I pulled out the fare (which I had counted before we got on the bus) of 36,000 đồng for the two of us and handed it over. If looks could kill, we would be dead. He gave us a look of purest hatred and then finally left us alone the rest of the bus ride. We watched him charge several other unsuspecting tourists the 30,000 đồng fare during the bus ride. Having already driven him quite mad, we decided it wouldn’t be prudent to let the other tourists know they were being ripped off and force another confrontation with the conductor.

In case you think I might have made a mistake and underpaid, the fare schedule is actually posted on the front right of the bus. It seems to indicate the fare is 17,000 rather than 18,000 đồng. For this reason the conductor quickly herds you in the rear bus door. 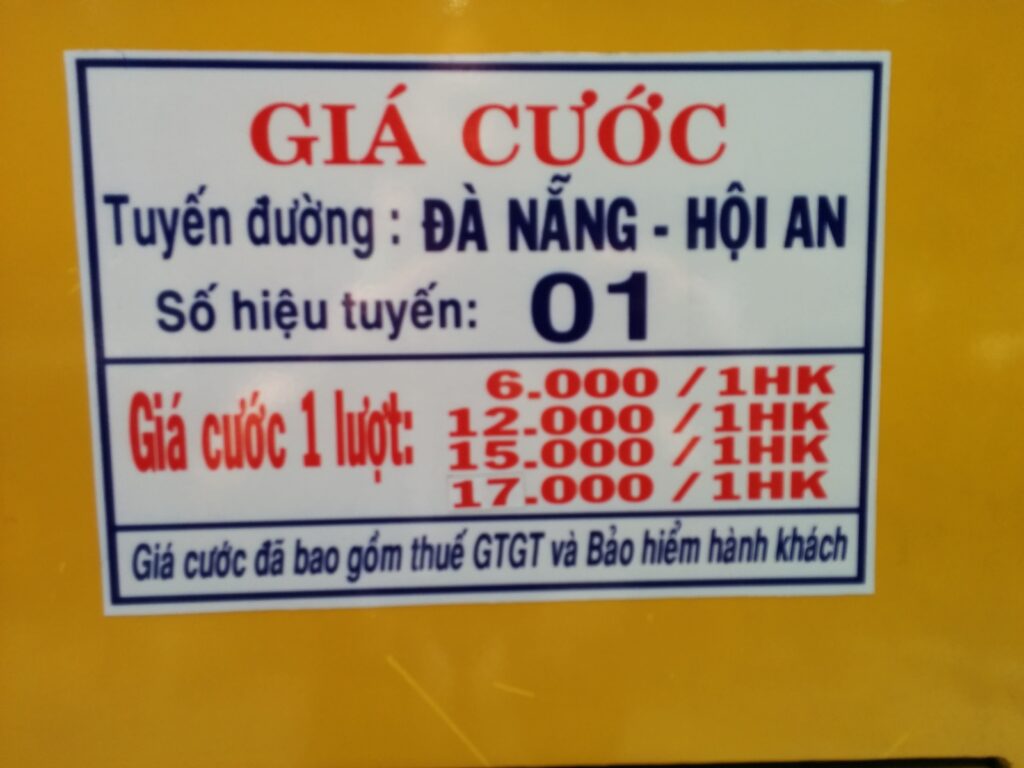 Everyone is in on it

Get this: all of the locals on the bus either sneakily hand their money to the conductor so that the tourists don’t see (and realize they got ripped off) or they actually pay the conductor with a 50,000 đồng note. When they get off the bus, the conductor steps out to give them their change where those on the bus can’t see. We witnessed both of these events ourselves. The Buddhist monk next to us even participated by giving the conductor 50,000 đồng and allowing his change to be given once he left the bus and was hidden from the foreign bus passengers. Apparently all of the locals who regularly take this route are happy to help the conductor scam tourists by either fake paying the inflated fare, or secretly paying the correct fare in the first place. Literally a whole bus of people was in on the scam.

Was it worth it?

Let me be clear – the confrontation I forced saved us only 4 dollars on a 30 minute bus ride. Why did I bother? For me, it was a matter of principle rather than a matter of money. A public bus has a fixed price – foreigners should not have to pay more just because they are foreign. Furthermore, if it was official policy to charge foreigners more and that money actually went into the infrastructure or wages (Vietnam is still a developing country after all) I wouldn’t even be upset. But in this scam the wages just go into the pocket of the crooked bus conductor.

I’ve encountered the opinion that, “they are poor, they need the extra dollar(s) more than you” which is true, but completely misguided. I’m happy to give a generous tip to an honest Tuk Tuk driver, but I will not willingly give into a scam – it only encourages more scams. Perhaps that is a quixotic mission in Vietnam where the entire culture seems to be one of “ripping off foreigners is okay.” Regardless, I’m sticking to my guns.

There is a river boat from northern Thailand to Luang Prabang in Laos. It used to drop you off at the pier right downtown. In 2013 the boat drivers started dropping off passengers at a makeshift pier 10 kilometers outside of town where their accomplice Tuk Tuk drivers are waiting to collect extortionate fares to bring the passengers into town. We’re going to be taking the boat in a few weeks and knowing we will have to go through this drives me nuts. If the locals are not making enough money, why don’t they just raise the boat price by a few dollars rather than go through such an elaborate scam that inconveniences the passengers and potentially strands them if they don’t go along? Either way, it reinforces my argument that willingly giving in to scams just encourages more scams.

We had to take the same bus back to Da Nang, and this time we went to the bus station rather than getting on the bus at a bus stop. The conductor of this bus actually tried to get us to agree to the scammy fare before we even boarded. After we told him we weren’t going to pay the scammy fare, he tried to block the door to prevent us from boarding and we had to push past him to get on the bus. Before the bus started moving as he attempted to get us to pay, he threatened to kick us off. I had read that they don’t have the authority to kick us off, and if he had actually tried, we would have called the tourist police who would have sided with us. So we called his bluff and kept sitting on the bus, and like on the first ride, the conductor eventually accepted the correct fare.

Tourism rates have been declining recently in Vietnam, and some speculate that visitors get such a bad impression from being ripped off that they don’t want to come back. Is that actually the cause of the declining numbers of tourists? I’m fairly skeptical. Regardless, despite the attempted scams, I really enjoyed Vietnam and would happily go back – but you need to be on guard.