We love to try new food. (Have you guessed from all the food posts?) Each new dish we try broadens our culinary horizons and gives us more to draw on when cooking. Despite our enthusiasm for new food, there have been a few moments on this trip when we’ve had opportunities to try food strange enough to require us to step quite a bit outside of our comfort zones. I anticipate there will be a lot more of these opportunities in our future travels, so expect a part 2 in a few months.

We’ve organized the dishes from least to most challenging to eat. 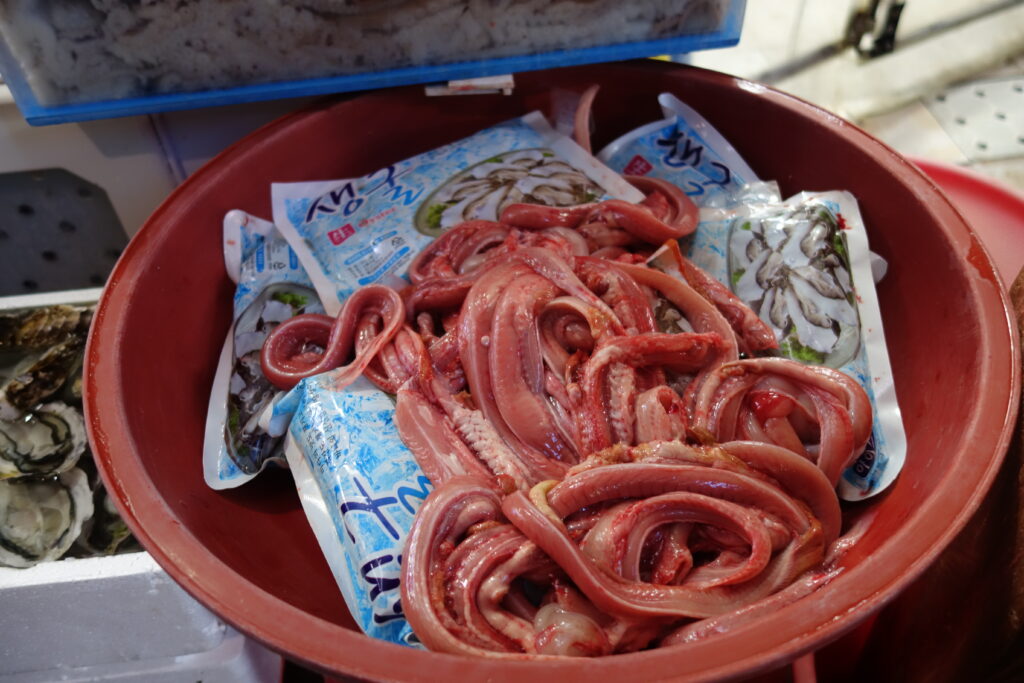 Imagine walking down the street and in front of a restaurant spotting a basket of writhing, bloody, snake shaped masses. Have you stepped into a horror film? Nope – you’re probably walking down the street in Busan’s Jalgachi fish market. You’ve located a restaurant whose specialty is a type of eel that is evolutionarily ancient. It’s a local delicacy. Live eels are expertly skinned and set aside prior to cooking. We got the impression they were prominently displayed once filleted in order to advertise the food served inside.

The eel meat is combined with onions and ssamjang paste and then placed on a burner on the table for you to cook yourself. 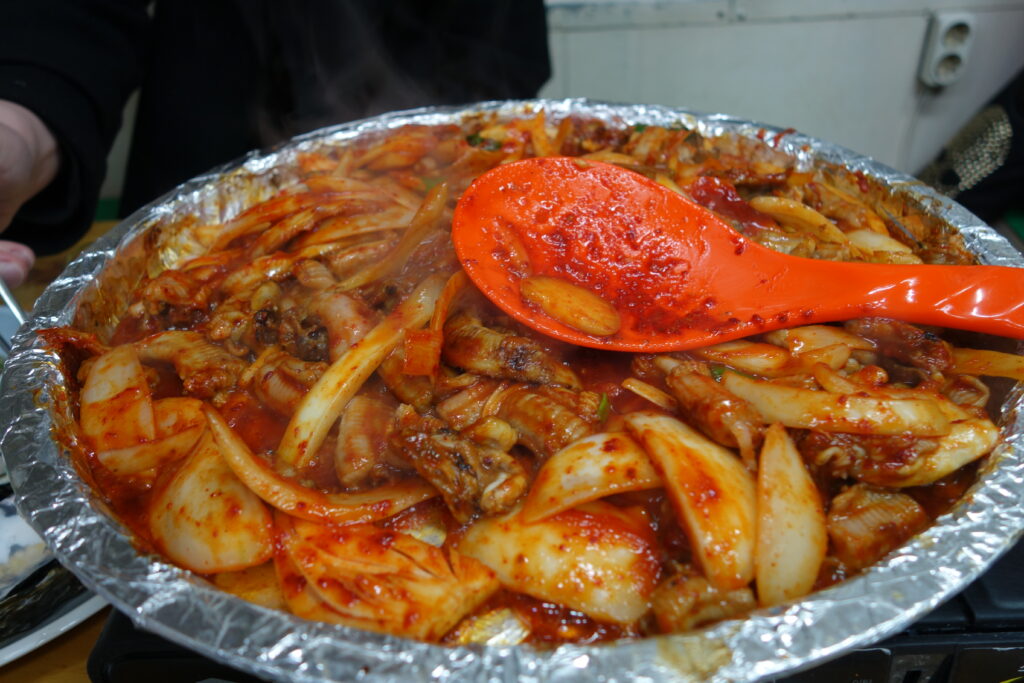 Once cooked you scoop some of mixture onto a bite-sized sesame leaf (which carries a moderate anethole note with a tiny bit of horseradishy-pungency) and devour! To be honest, we didn’t actually find this dish remotely challenging to eat (though we did feel bad for the eels) and we found it quite delicious! It’s included in this list as a warm up to what comes next.

Balut is a very popular food in the Philippines. Its original production capitol was the Pateros district of Manila. In 2015 the area is too polluted to have duck farms but is still known for its skillful balut preparation.

Would you swim in here?

Fortunately for us, this is where our CS host (Ei) lived in Manila. Our first night in Manila, within ten minutes of dropping off our bags and with only several hours in the country, Ei took us to try this local delicacy!

Balut is a developing duck embryo. The number of days the embryo has been allowed to develop before boiling determines the appearance and flavor. On the evening of our arrival, we tried it at the ideal age of 17 days. At this point it is still soft throughout and there is no beak, feathers, or claws and the bones are soft. You crack the balut open, peel it a bit, drink the slightly whitish liquid inside (consisting mainly of white blood cells, according to Ei), peel a bit more, season with salt and chili infused vinegar, and bite in. 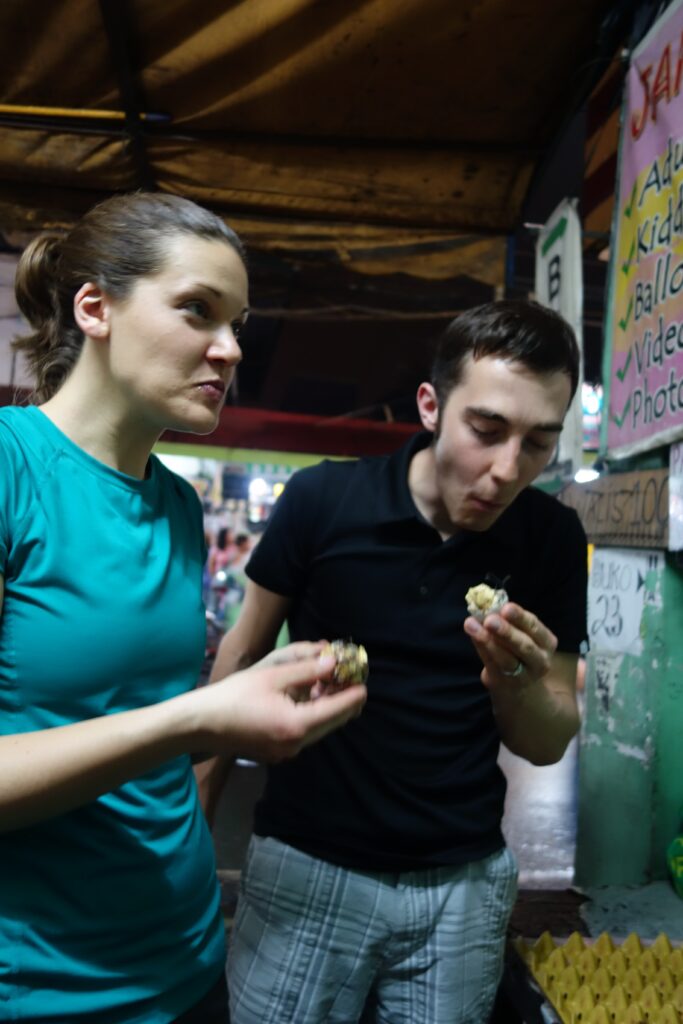 Ei was kind enough to record us trying our first balut. Check out the video here. Balut is actually quite good. It tastes almost just like a hard boiled egg – just a tiny beat meatier. I think the only reason this food is considered so strange in the west is the psychological hang up of eating a partially developed embryo.

Much later in the trip I decided to try balut again. Either trying to facilitate my adventurous experience or being a jerk and trying to get a laugh from my reaction, the vendor picked out a 21 day balut for me. (I only found out this fact after peeling it.) This balut had a noticeable beak, observable feathers, and slightly crunchy bones. A crowd actually gathered nearby to watch me eat! To their disappointment, I enjoyed my balut without recoiling in disgust, let alone making any weird faces. 21 day balut has more of a meaty than eggy flavor and a moderate (but tolerable) crunch. Unfortunately we didn’t take a picture until I already ate half, but you can still make out the feathers in the following photo. 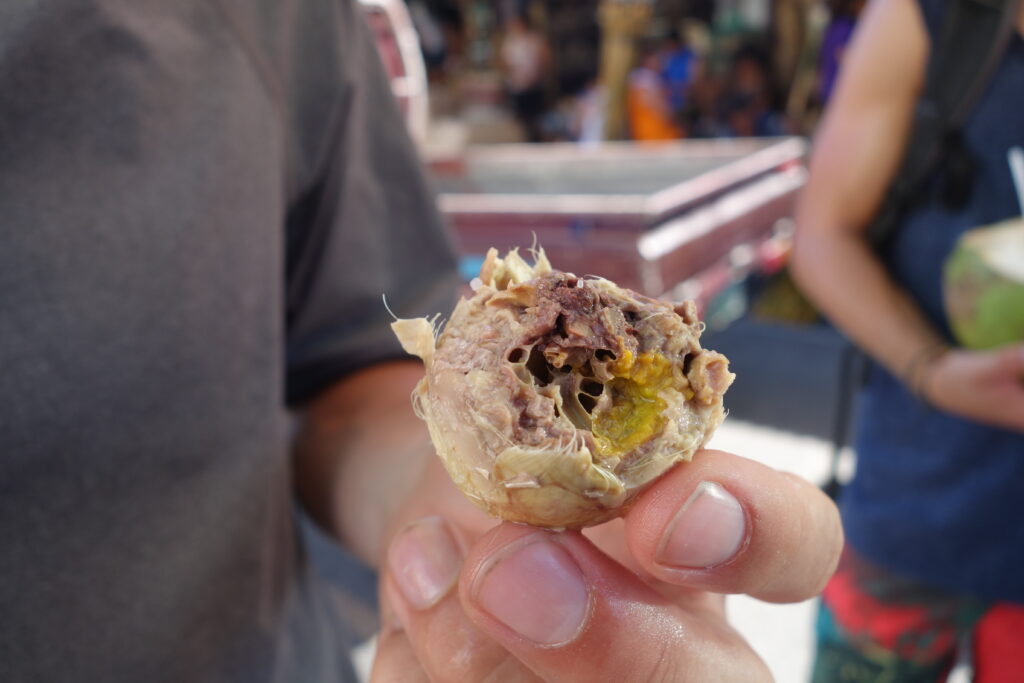 After trying balut, Amy and I were still hungry so Ei took us to try some street food at a vendor located a stones throw from her house. At the stall we found a table with various meats on sticks to choose from. They had been sitting uncooked in 80+ degree temperatures for who knows how many hours, so we had them cooked well done before eating. 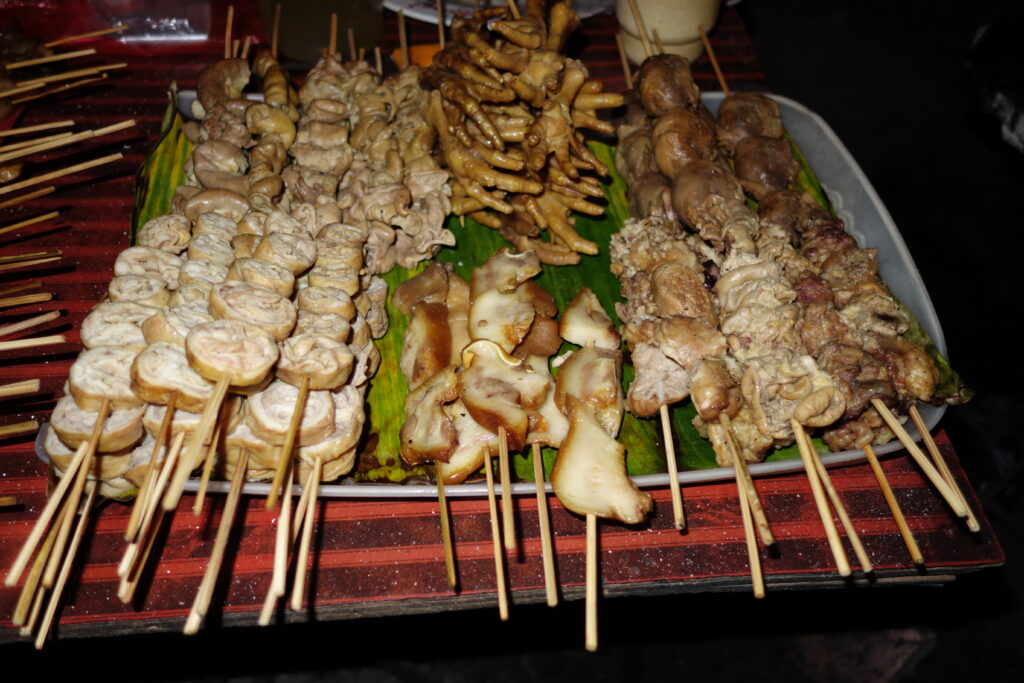 We tried to pick out some of the strangest meats. We had (try to identify them in the picture below) pigs ear, chicken intestine, pig intestine, and chicken blood tofu (chicken blood formed into squares with a gelling agent). 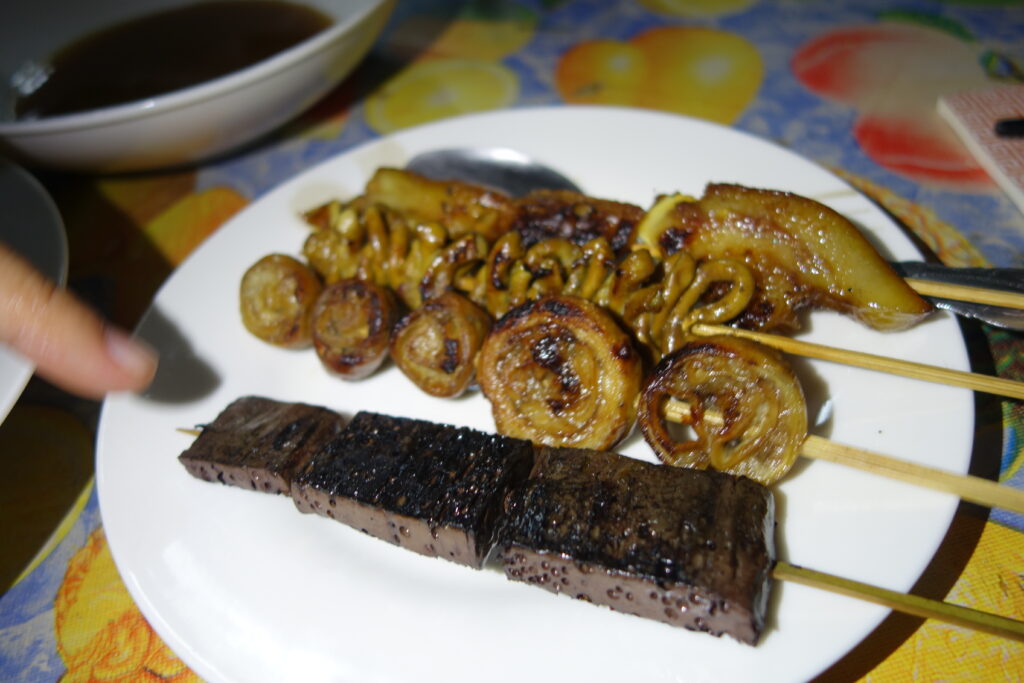 Overall, these were okay. The blood tofu was edible but weird, the chicken intestine was okay, the pig ear was very bacon-like and the pig intestine was pretty good. The latter two were firmly in the “good” rather than “strange” category. I think all of these would have been better if they were not overcooked (we only got them well done for food safety reasons). I also think we would have liked them more if we were more used to the taste of meat in the first place. Meat is a fairly unusual taste for us so we didn’t appreciate these as much as someone used to eating meat probably would. 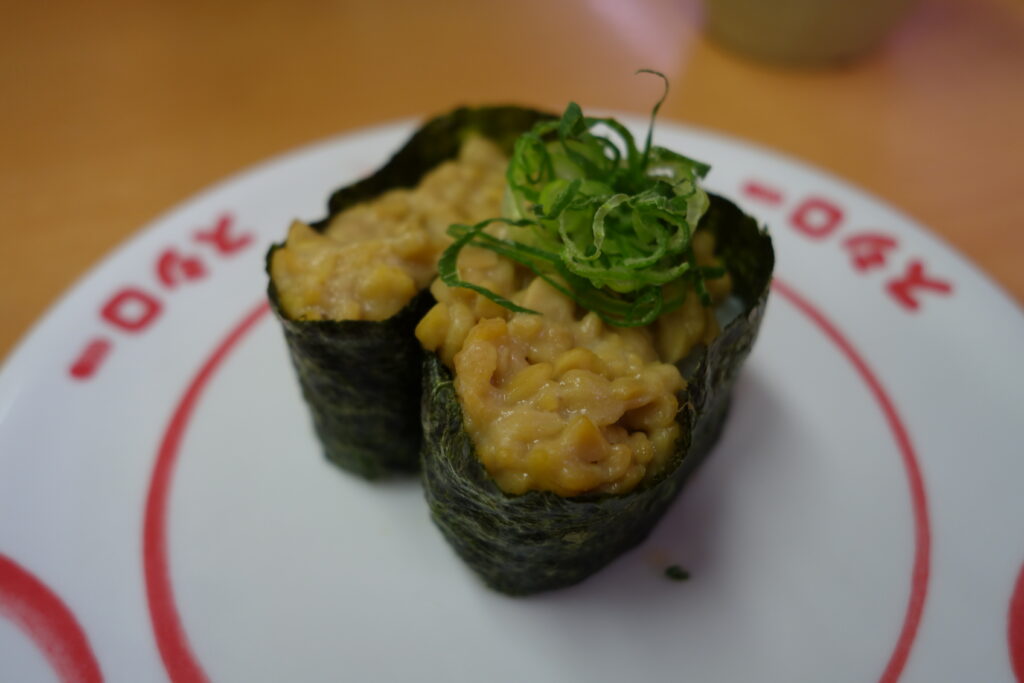 We had our first taste of this Japanese specialty unwittingly. We were in a conveyor belt sushi restaurant and grabbed two pieces of gunkan sushi off the belt. It looked interesting and we though perhaps it was some sort of ground sea creature. We both plopped them in our mouth and immediately recoiled in disgust. They had an incredibly strong ammoniac flavor that made me think whatever sea creature we were eating must have started to rot. Questionably, we finished chewing and swallowed anyway, not wanting to make a scene.

It was only later when reading about strange and unique foods did we realize that we had unknowingly tried nattō. To spare you a visit to Wikipedia, nattō is bacterially fermented soy beans. The process creates slimy, sticky, and from mildly to strongly ammonia flavored beans. 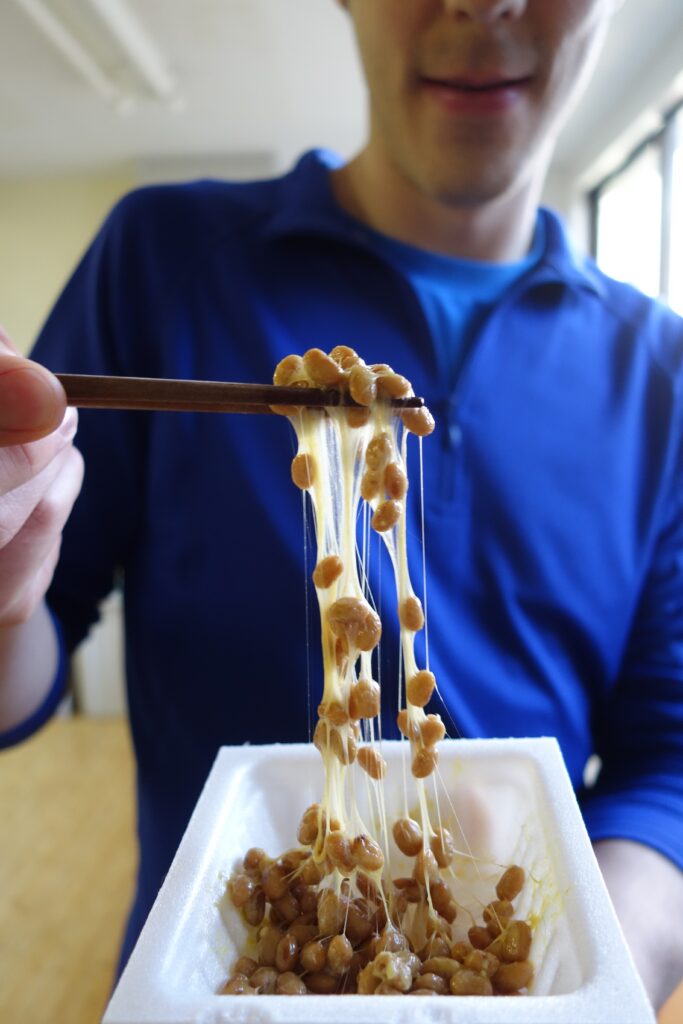 With the knowledge that the flavor we experienced was normal (and not a sign of our food rotting) we set off to try it again with an open mind.

It is sold in every supermarket in Japan so it was quite easy to find some. It comes in a little Styrofoam container with a small packet of soy sauce and mustard. 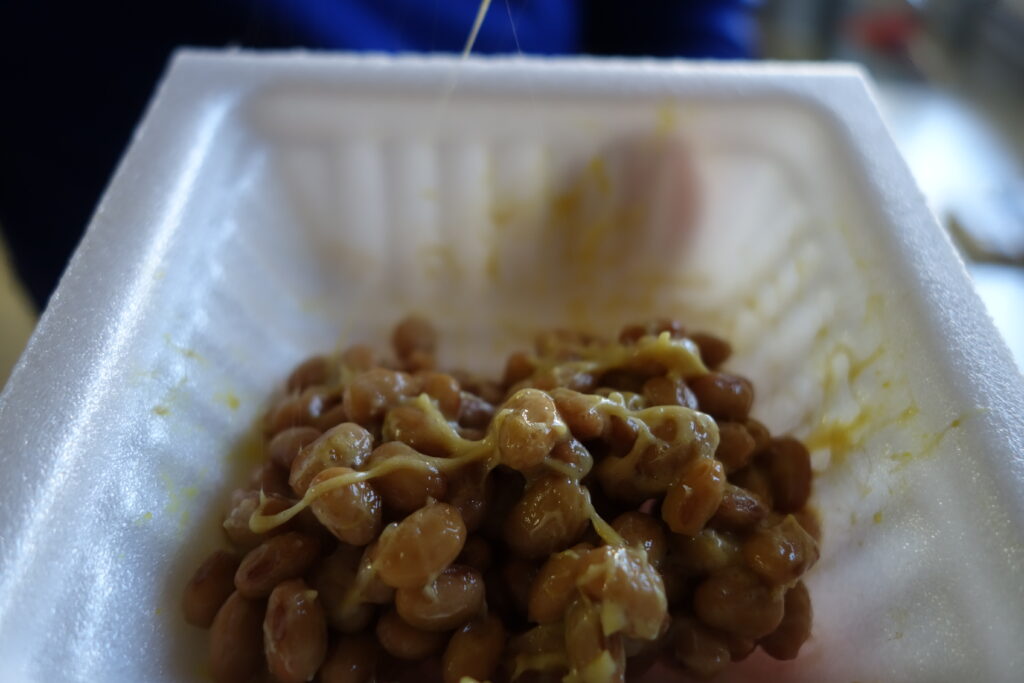 Trying it a second time, we found the flavor still strange enough to prevent us from liking it but mild enough to eat the all of it without too much trouble. Nattō is a prime example of a food that you acquire a taste for and I suspect with a few more encounters I would be happily scarfing it myself. Amy isn’t quite convinced. 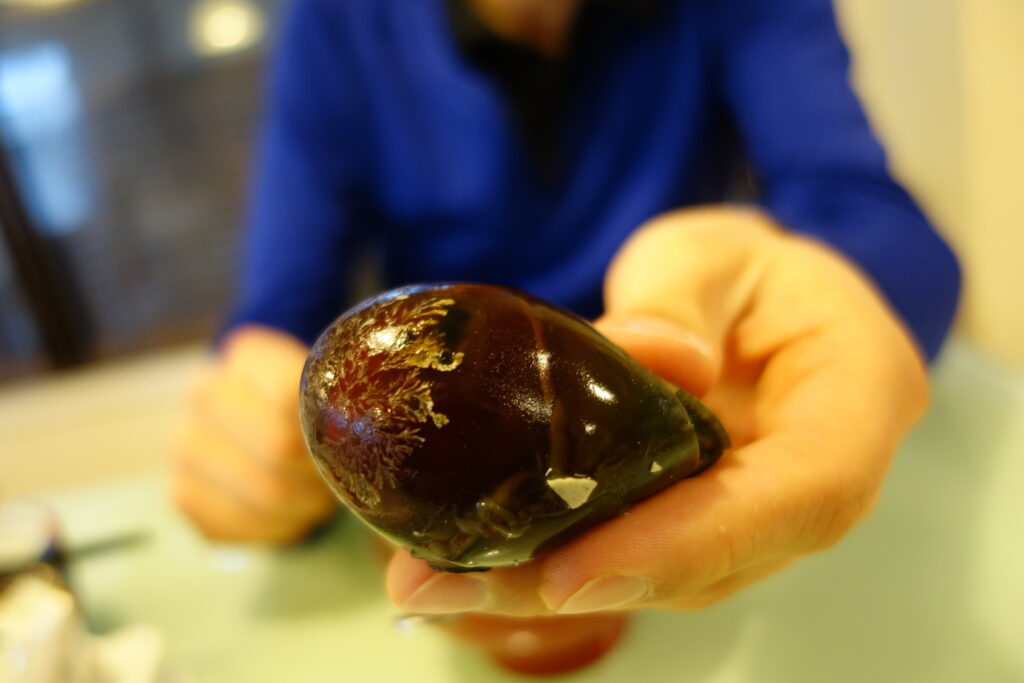 This is actually a Chinese delicacy, but we found some in a supermarket in Japan. After reading about it in Harold McGee’s awesome book On Food and Cooking, I wanted to try it and was excited to have found the chance. In the original preparation, a raw chicken or duck egg is covered in a strong alkaline clay and then buried for several weeks to months. The alkali works through the egg and preserves it. In addition, with the time and alkaline environment the egg proteins denature (cook, essentially) and break apart to form savory amino acids. Other strongly sulfur-tasting compounds and ammonia are also created in this process. At the end you are left with a translucent albumen – often with a fractal organic pattern from the curing process – and a downright fetid smelling purple-blue-green gooey textured yolk. The ammonia and sulfur smell is overwhelmingly pungent. 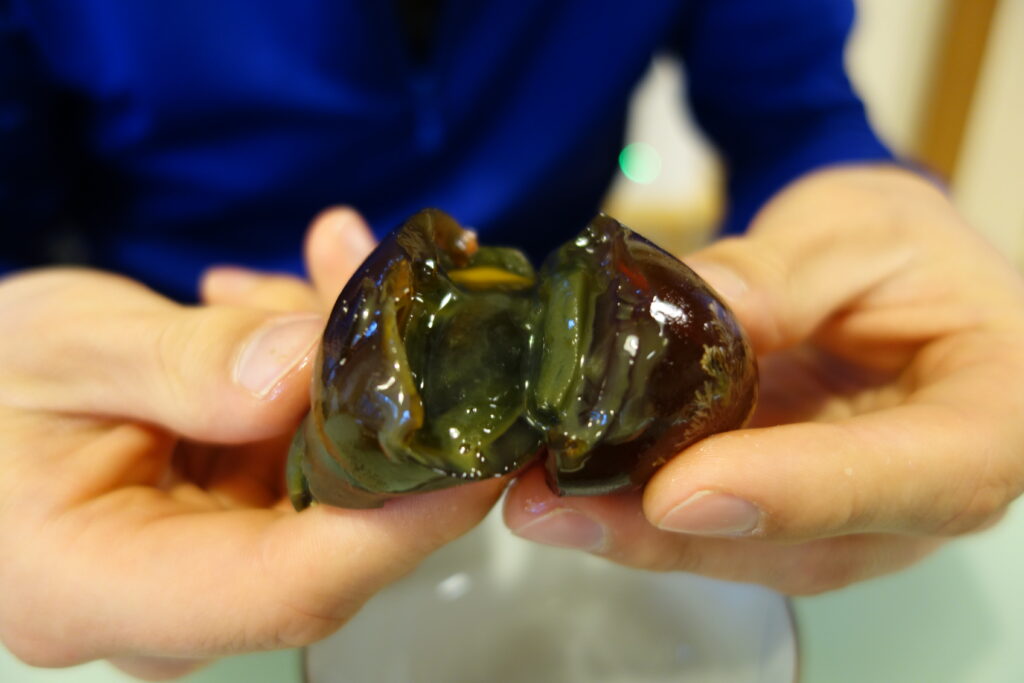 Amy thought this was the grossest thing she has ever tasted and refused to eat a second bite. I managed to choke it down but found it quite challenging. This would be quite the taste to acquire. If Amy were making this list, the century egg would be last, but I’m making it and I didn’t find the century egg as rough as…

In Busan, Korea, we bit the bullet and finally tried a popular street food that we had seen (and smelled) all over Korea. The larvae of silk worms are boiled in plain water and then served in a cup with a toothpick. We’ve learned from one of our CS hosts that they are a popular snack while drinking soju and are often served complimentary in bars . The taste was really earthy and a bit organ-meaty. Amy ate one and was done while I only managed a handful. I think the mental aspect of eating bugs was a decent hangup for us, though we did our best to push through it. We also made the mistake of trying it when already full – if we were ravenously hungry we might have fared better! It also would have been much more palatable to our western tastes with a bit of spice or chili. Everything else in Korea has spicy chilies – why couldn’t this? 🙂 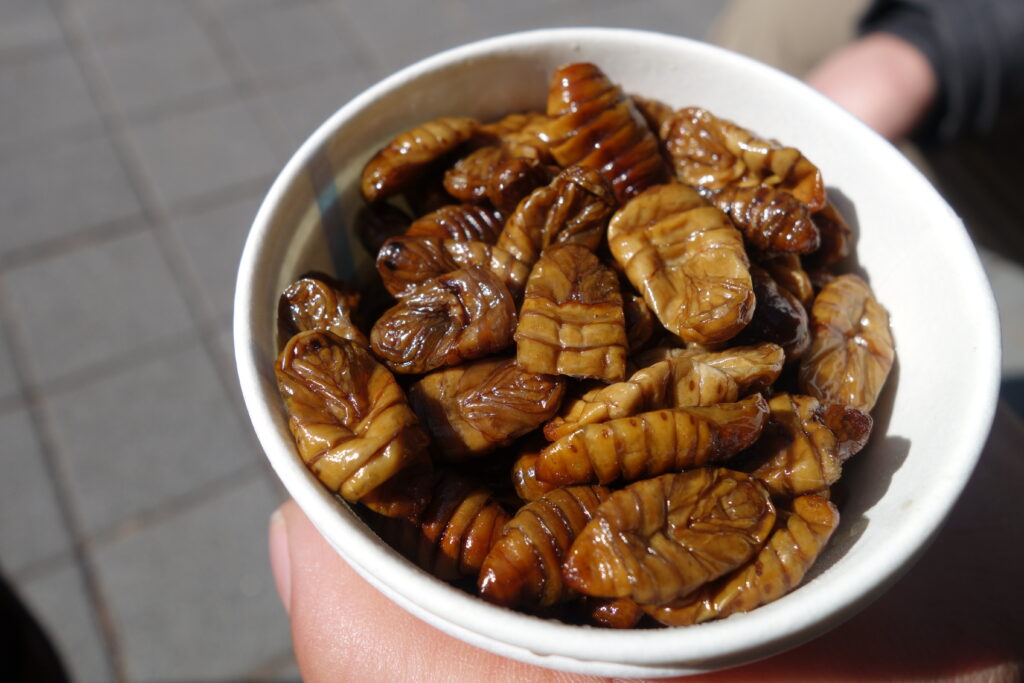 After writing this post, I remembered a friend we made in Cebu telling us that balut was one of the foods used in the TV show Fear Factor. I looked it up and found out that the century egg and silk worm larvae were also used on the show. Is it still on TV? Maybe we should enter.

← Traveler’s Guilt
The Philippines: The Good, The Bad, and The Quirky →