Singapore: Disneyland with the Death Penalty

Compared to the countries we have been in the last few months, Singapore actually has:

We’ve heard many people call Singapore boring, dull, tame, and without character, but to us, after months of travel in the developing world, it was a breath of fresh air to be able to cross the street without fearing for our lives. I exaggerate a little… but not too much.

Singapore has its downsides of course: the main one being how expensive it is. For this reason we only spent two full days there, but we packed a lot in to that time. It also has some really strange laws, and some really harsh penalties (90s flashback; anyone remember Michael Fay?).

The fact that Singapore doesn’t mess around is one of the first things you see when you enter the country. Like Indonesia, Singapore imposes the death penalty on drug traffickers. 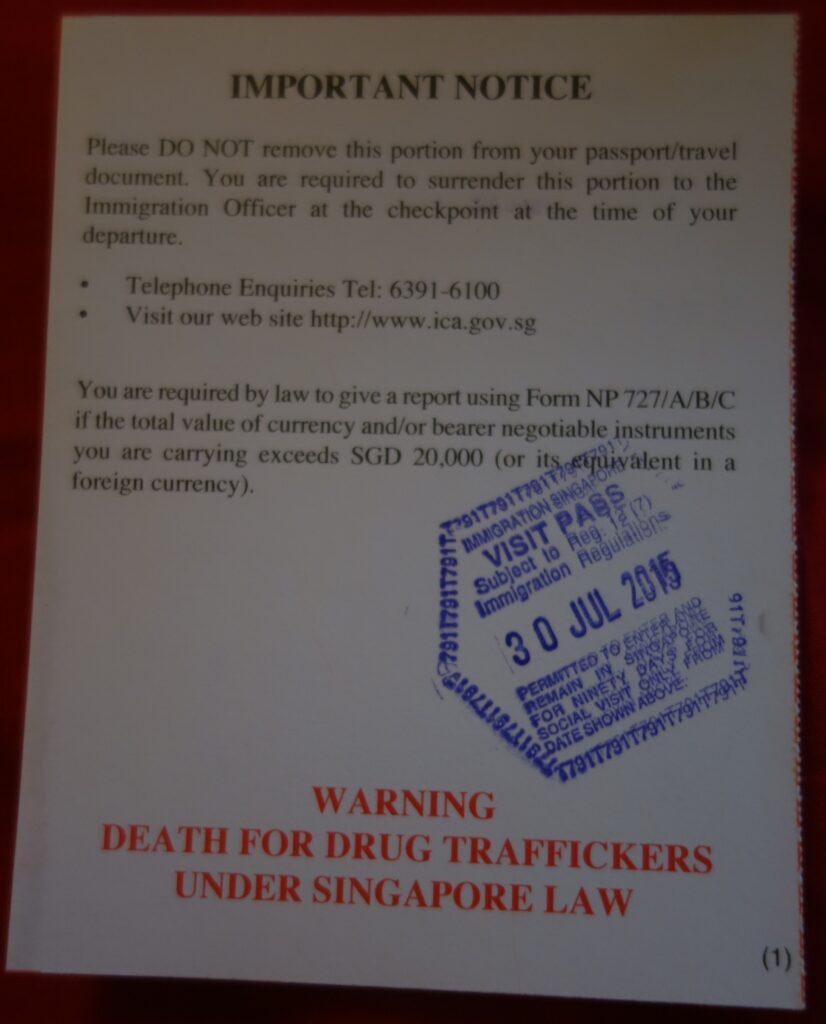 Chewing gum is illegal in Singapore and while immigration didn’t confiscate our small personal supply, we made sure not to be seen chewing it in public.

Eating on the metro is illegal (in most other countries we’ve visited it is socially discouraged but not against the law) as is bringing durians on the train. 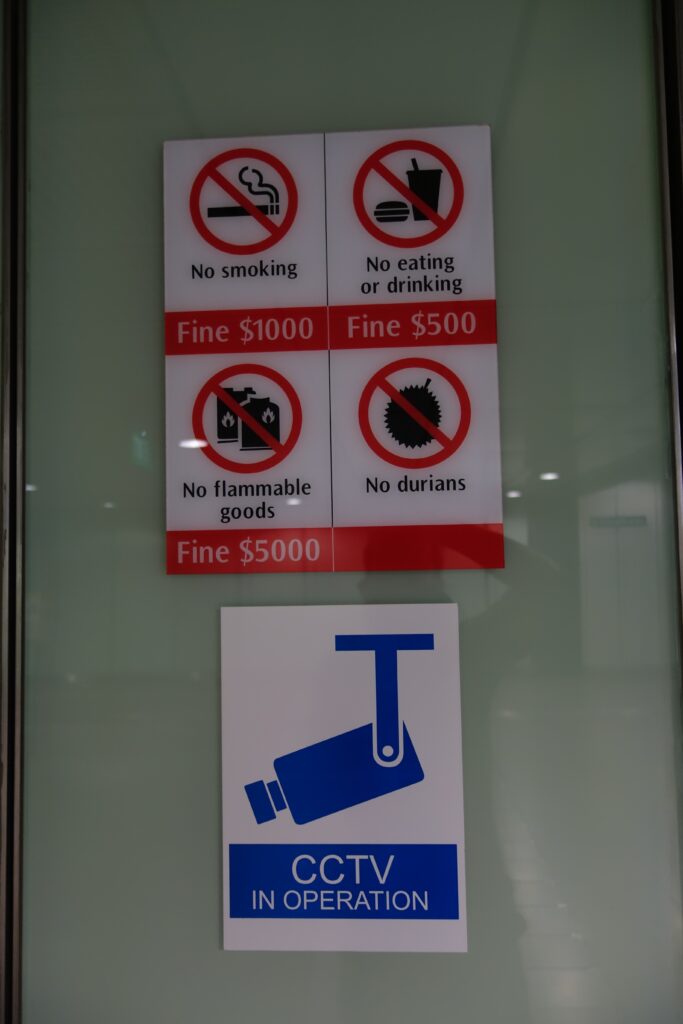 Things that are illegal in the Singapore metro.

There were posters in public advising against crime and some were quite strange. For example, we saw a poster warning that rioters get caned. Do anti-rioting posters really work? To me, rioting seems like a heat-of-the-moment crime like murder that people aren’t going to reconsider because they saw a sign, but hey, maybe that is just me. 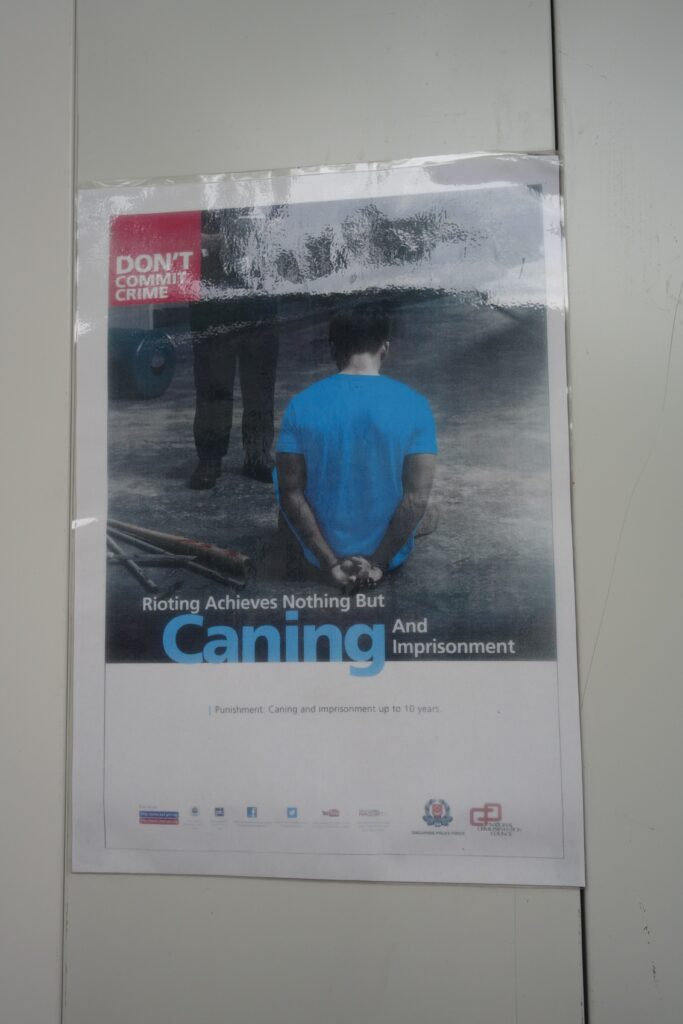 Riot and get caned.

This reputation for harsh laws with strict penalties has earned Singapore the moniker “Disneyland with the Death Penalty” and we found it quite suited. (The Disneyland bit comes from some of the major public attraction in Singapore like Gardens by the Bay, the Marine Life Park, and the Singapore Flyer.) 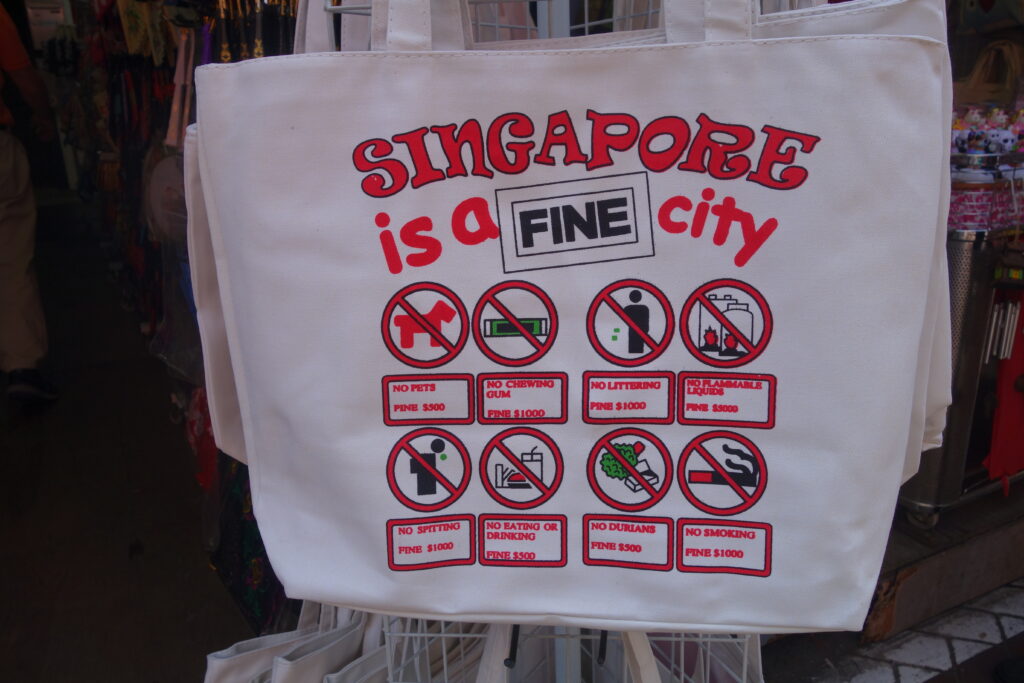 Maybe we’re boring and tame, but we didn’t have a problem with any of the laws and thought the lack of litter, chewing gum stuck on the sidewalks, and trash floating in the rivers was really nice. 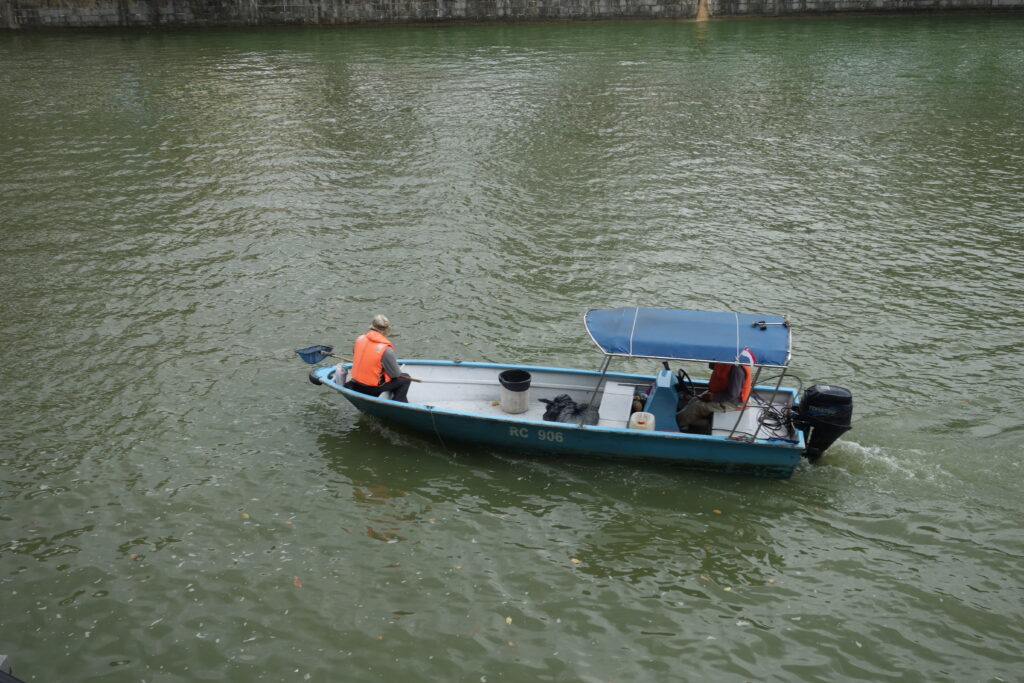 Singapore actually hired people to fish garbage out of the river! Everywhere else it is the opposite – everyone throws their garbage into the river!

Okay, okay, enough about Singapore’s laws. What is there to do there? In addition to the major sites listed above, (which we didn’t actually visit because they were all really expensive) Singapore has an amazing Botanical Garden that is actually a UNESCO World Heritage Site. The (free) botanical garden lived up to the hype, but what was especially cool was the Orchid Garden inside of the Gardens. The Orchid Garden cost 5 SGD per person, but the orchids inside were absolutely incredible; truly some of the most beautiful plants we have ever seen. 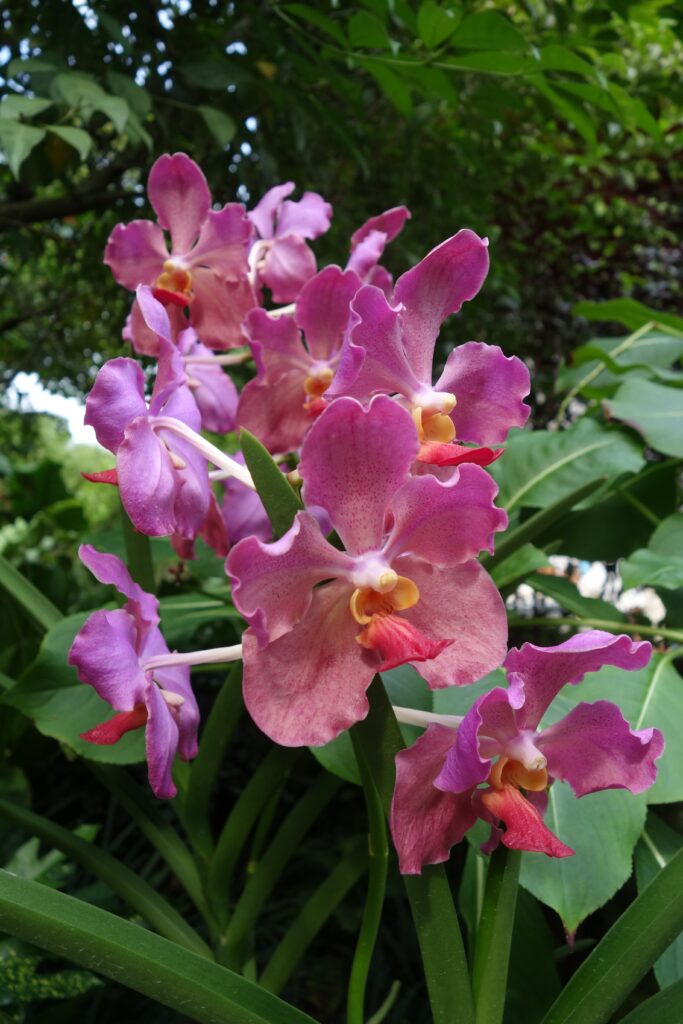 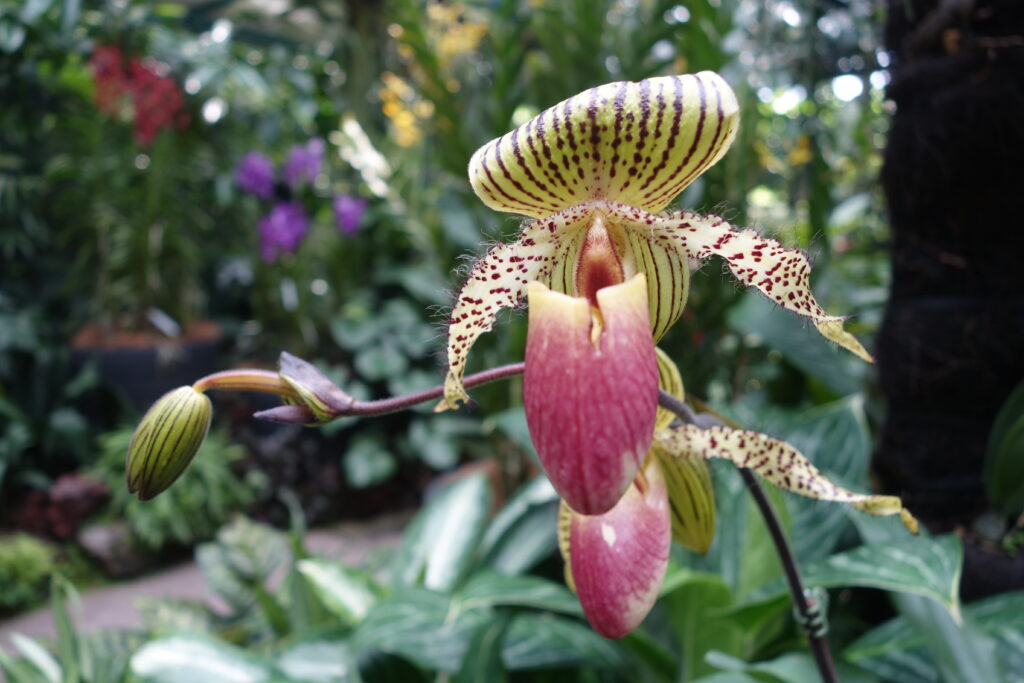 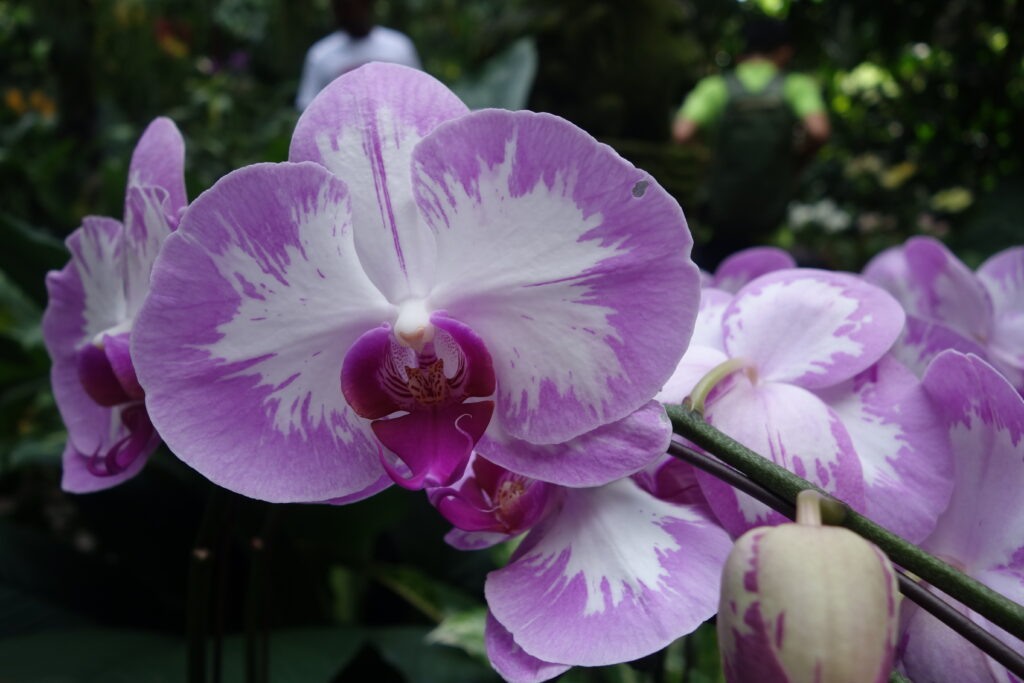 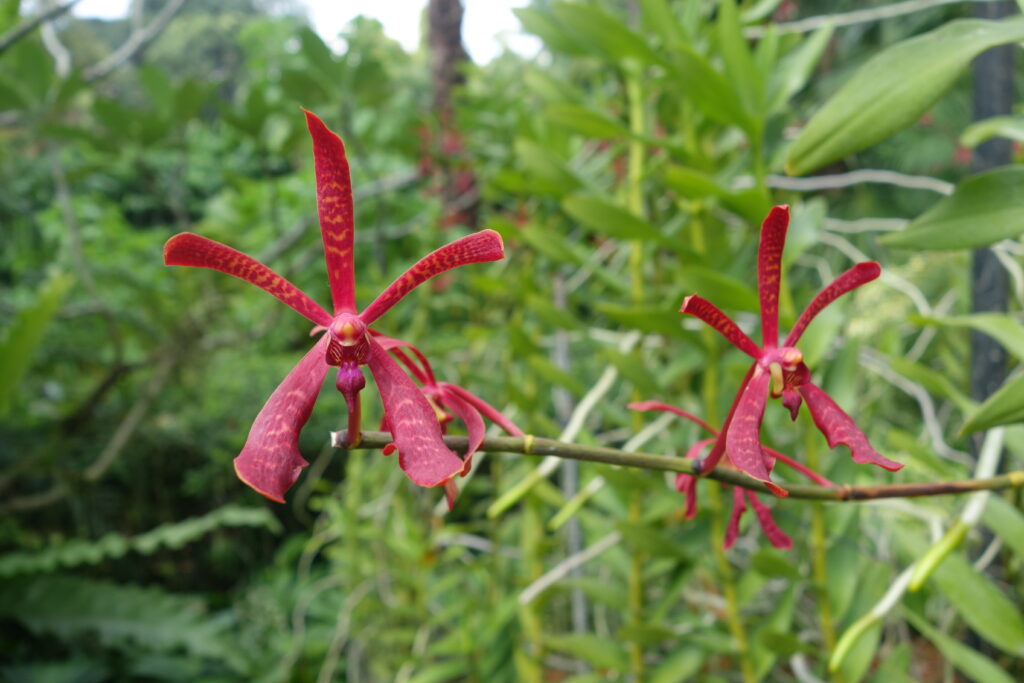 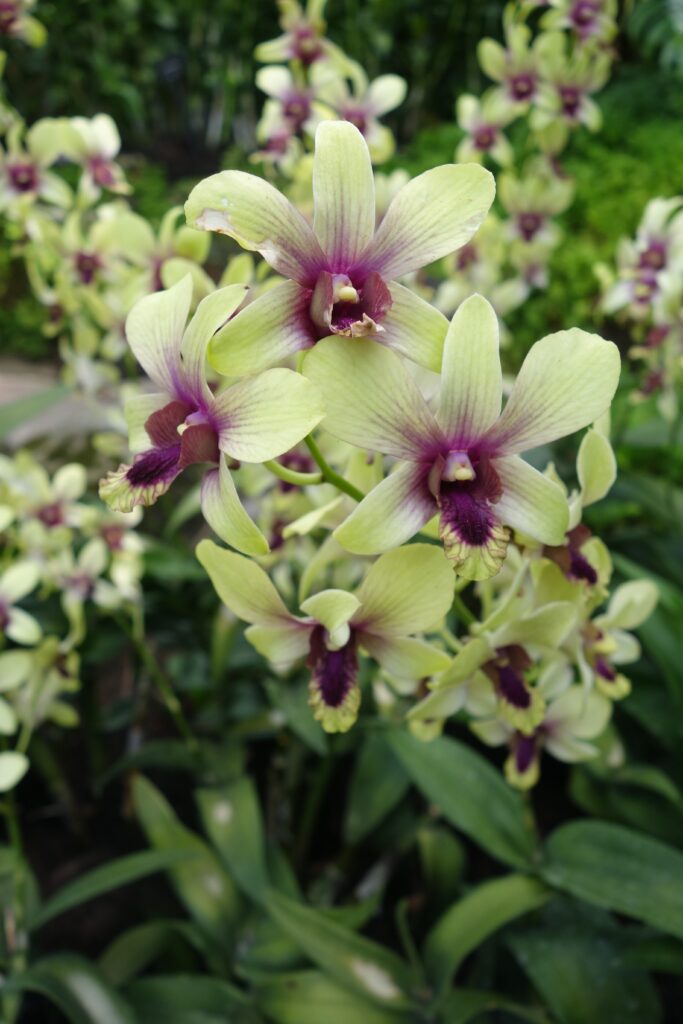 Another fun (and free!) thing to do in Singapore is to walk around the river promenade and admire all of the unique and sometimes zany architecture and art. 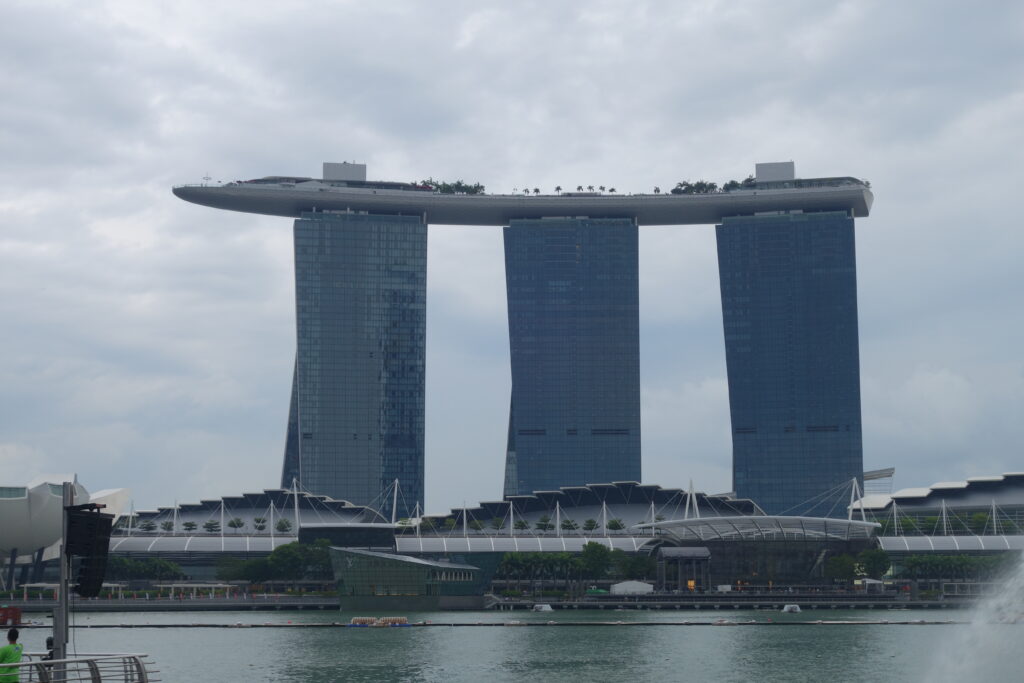 Marina Bay Sands building. Yes, that is a giant boat on top. 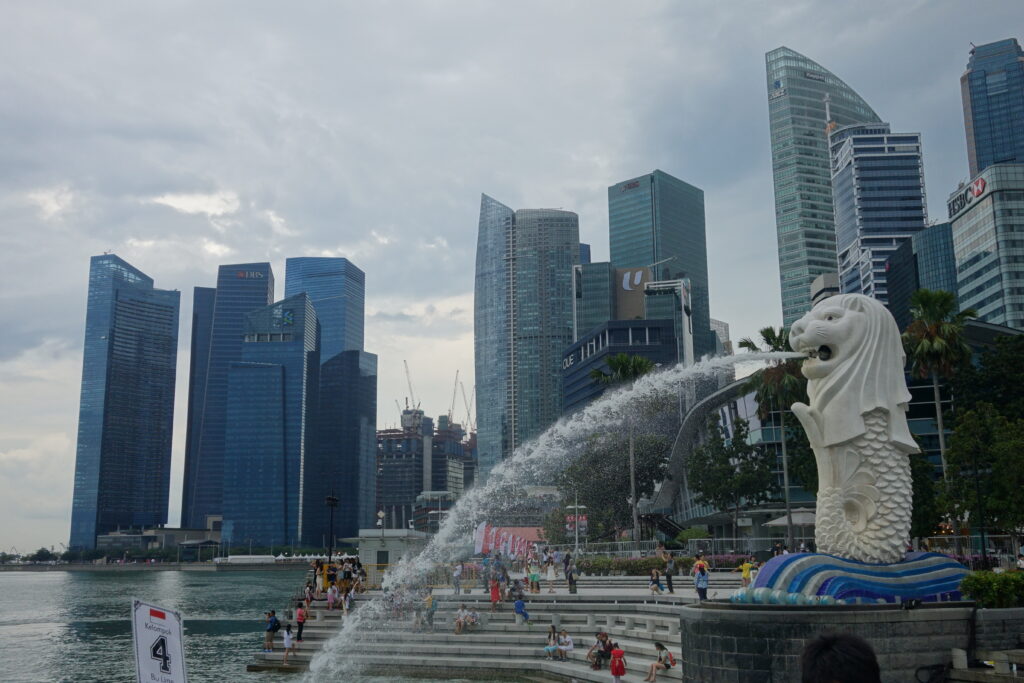 Did I mention that a merlion is a thing? It is the national mascot. 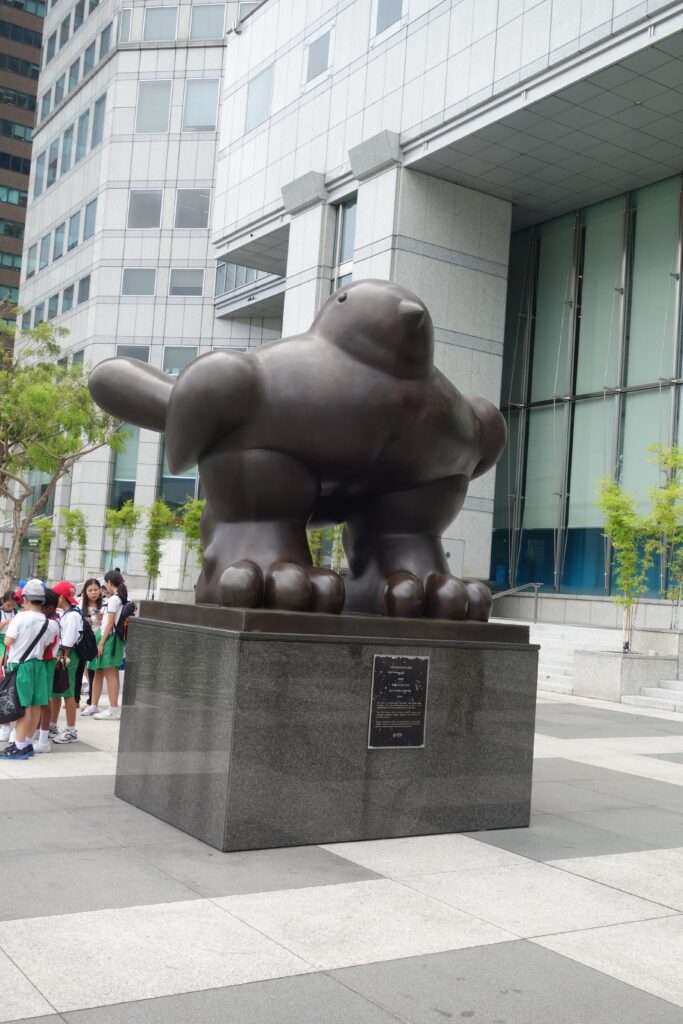 We nicknamed this one the “turd bird”. 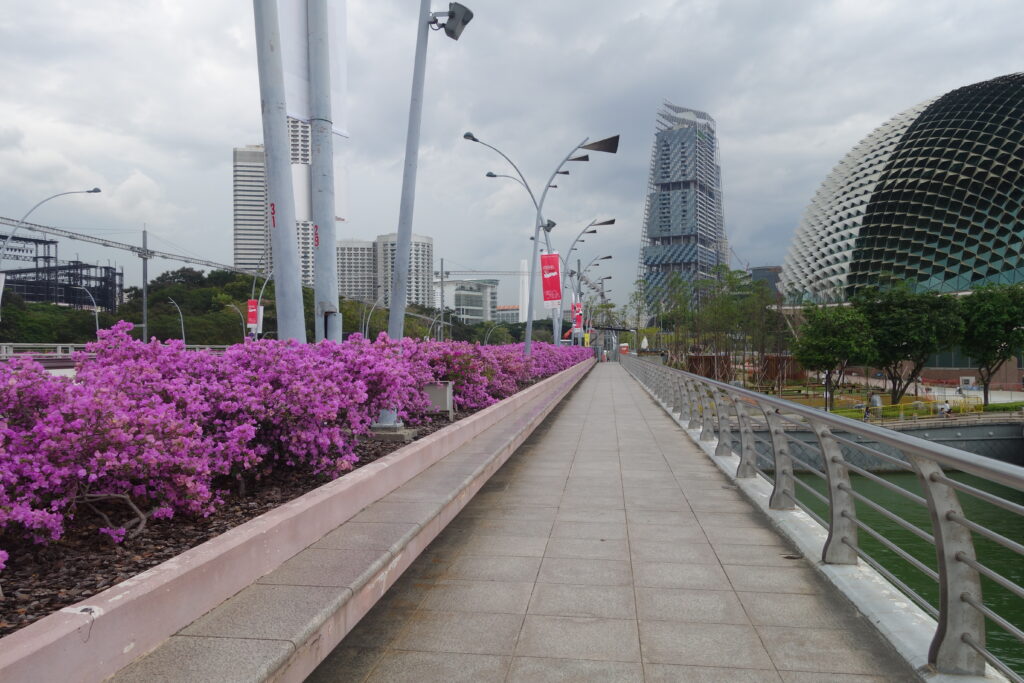 A whole separate area for pedestrians to walk – separate from the road! You can see the Esplanade (Theaters on the Bay) to the right.

Like Malaysia, Singapore is an ethnically diverse country. Only a few minutes walk separates Chinese neighborhoods serving pork from Indian-Muslim neighborhoods where you won’t find pork anywhere. I love the variety and vibrancy that comes from such diverse cities – not to mention the delicious cuisines!

The city has a visible Chinatown and a visible Little India. In fact, there was a newly constructed Buddhist temple in Chinatown that gave us a glimpse of what some of the older Buddhist temples we saw else in Asia might have looked like upon first construction.

The Buddha tooth Relic Temple seen from the street. 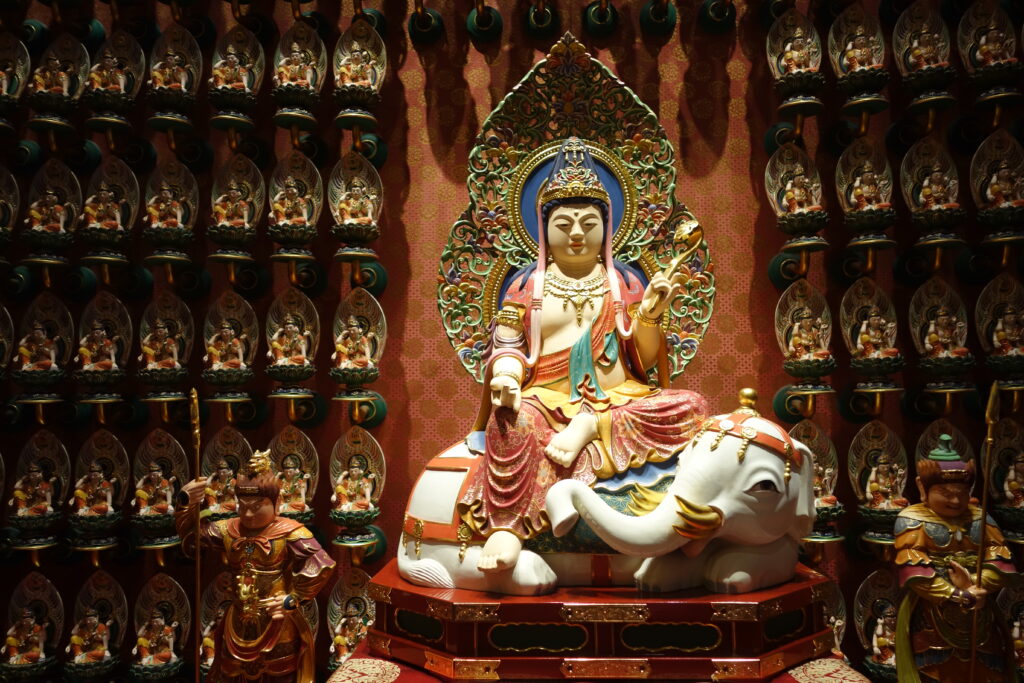 The inside of the temple.

We were fortunate to be there in the days leading up the the 50th anniversary of Singapore’s independence and could see the city gearing up to celebrate the anniversary. (See the SG50 balloons in the one of the photos above?)

Since no post would be complete without a mention of the food, I’ll mention that Singapore is famous for two dishes. Kaya toast is the first – a sugary cruncy toast that is smeared with coconut jam. We had ours served with a sous-vide egg. 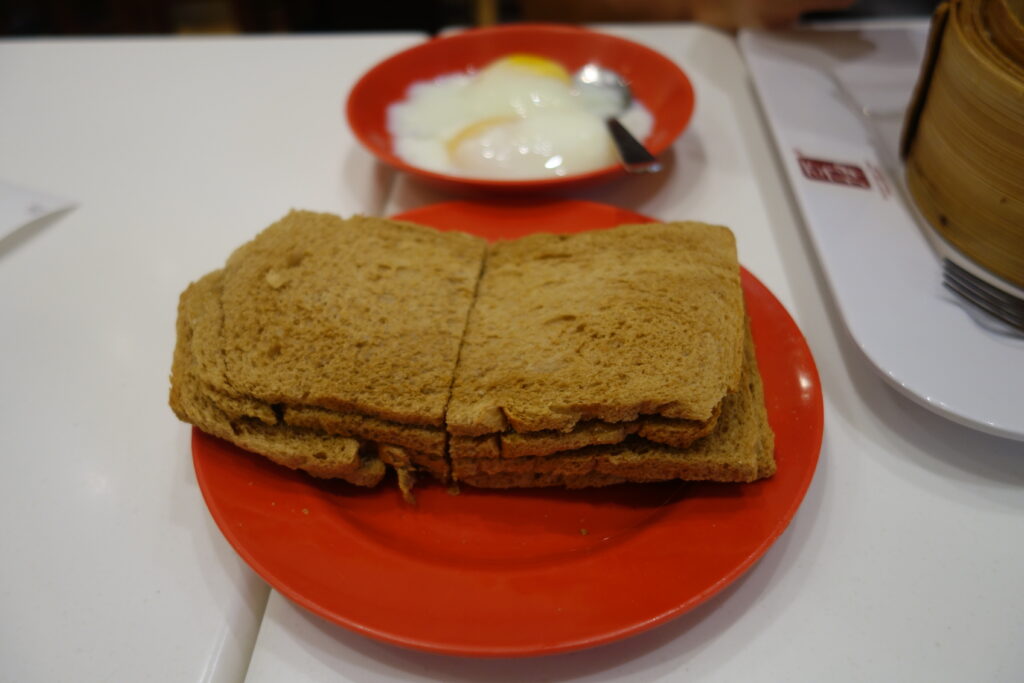 The second we missed out on because trying it would have annihilated our budget: Singaporean chili crab. On a future trip, perhaps.

Singapore was a fun, clean, and beautiful city. It would be high on my list of places to live abroad if we ever chose the expat life. 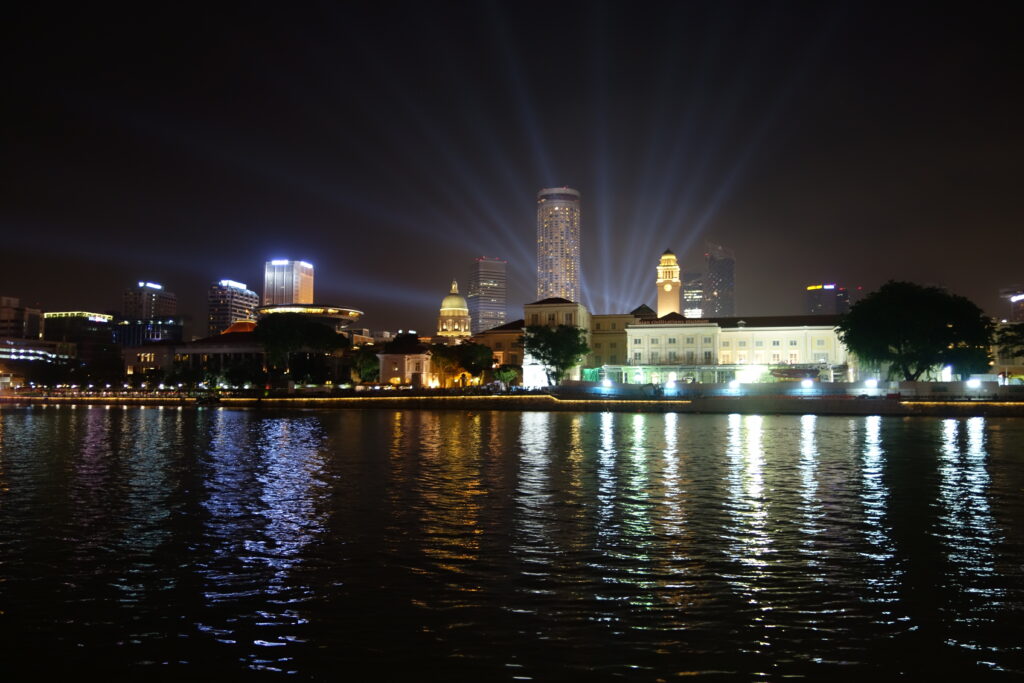 The River Front Promenade at night.