We’ve had the chance to try some additional fruits since the previous post and they have been delicious! 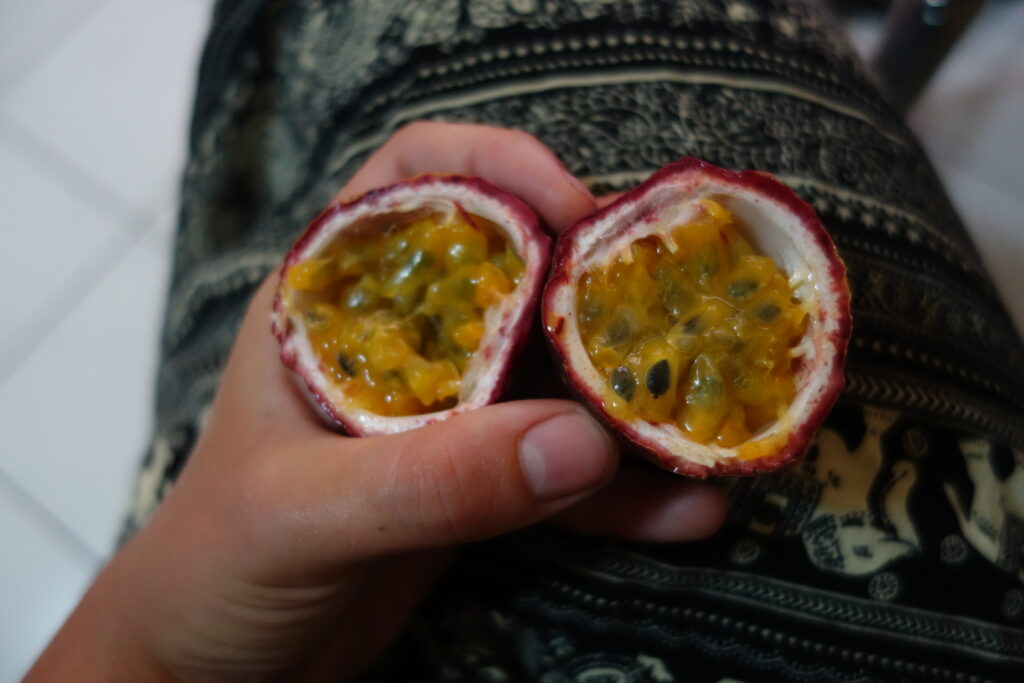 This is what a passion fruit looks like when cut in half. 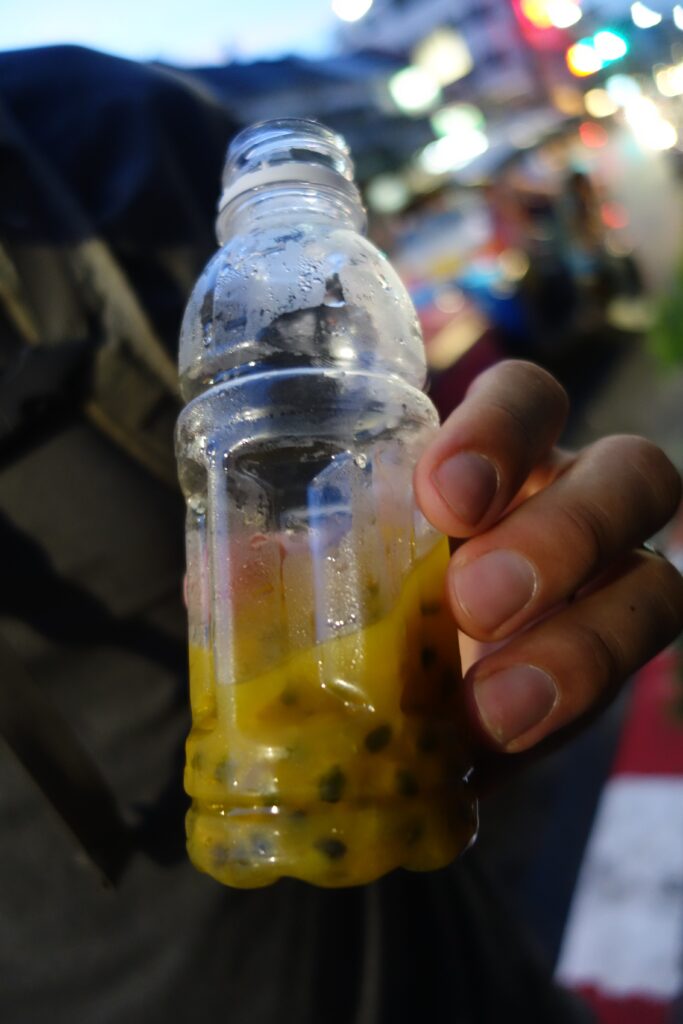 Passion fruit juice. The richest and most flavorful fruit juice I’ve ever had.

I think I’ve had passion fruit juice at home – perhaps a blend with other juices – but I’ve never experienced something as incredibly flavorful as a fresh passion fruit and fresh passion fruit juice. The flavor is absolutely electric – the most tangy and rich flavor of any fruit I’ve ever had. When the juice has seeds in it, they are like little jelly balls with a crunchy center. (Imagine if chia seeds were 5 times larger.)

While it is hard (if not impossible) for me to pick a favorite fruit, I am certain that passion fruit juice is my favorite juice. 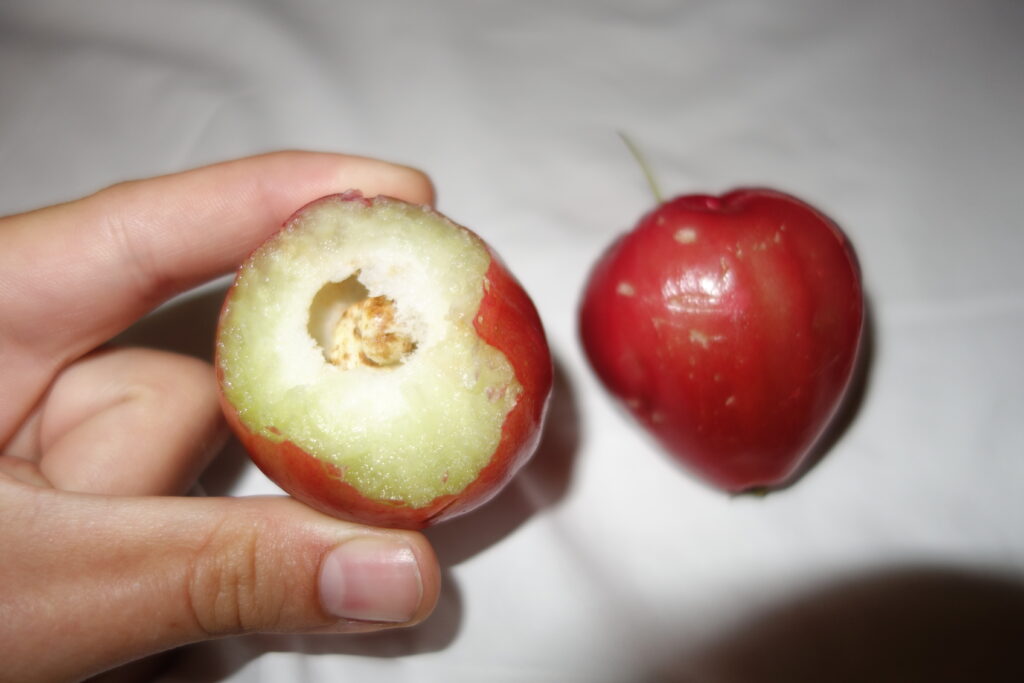 A whole Malabar plum on the right and one with the top bitten off on the left.

At the market when I asked what the red things depicted in the picture above were, I was told “plum”. Not being sure I had heard the woman correctly, I futilely Googled “Vietnamese plum” to no avail. Later we were gifted a few of the fruits by a kind Vietnamese couple on the train and we were able to establish what they were. Variously called the Malabar plum, plum rose, water apple, and rose apple, these fruits are from a shrub called syzygium jambos.

Unlike any other fruit we’ve tried, they have a crisp crunch (similar to celery), are not very moist, and have a floral, rosy aroma. They are also one the most astringent fruits we’ve eaten. Amy was not a huge fan, while I think that while they don’t make a great fruit by themselves, they could pair well with something else (I’m not exactly sure what I would pair them with, though). 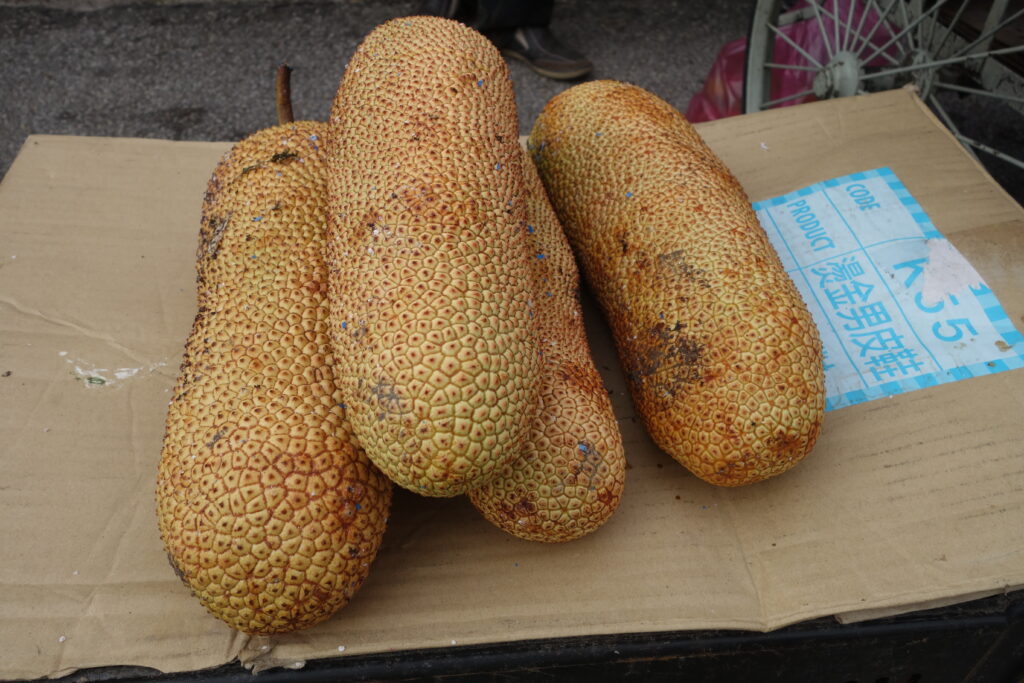 Cempedak fruits for sale on the roadside.

The cempedak fruit was hard to find. We were only able to find this fruit in Penang, Malaysia. It is related to the jackfruit biologically and it’s easy to see from the shape of the fruit and the arils inside. The taste was a strange cross between a jackfruit (sweet, floral, with bubble gum notes) and a durian (funky, oniony) and I found it somewhat off putting. The texture was also reminiscent of the durian fruit; it was mushy and custard like. 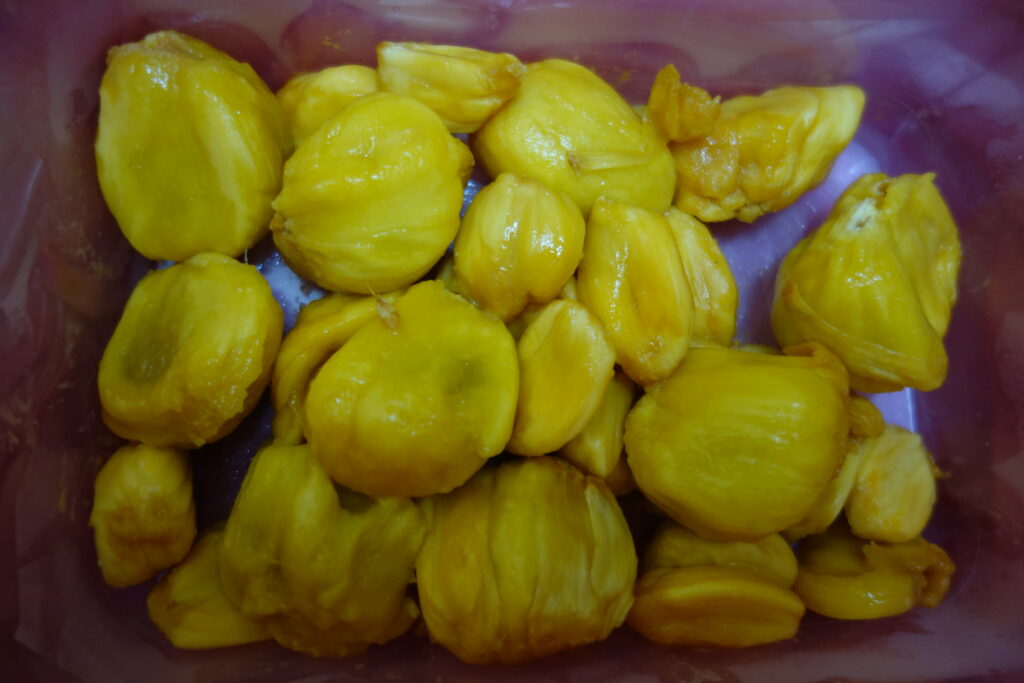 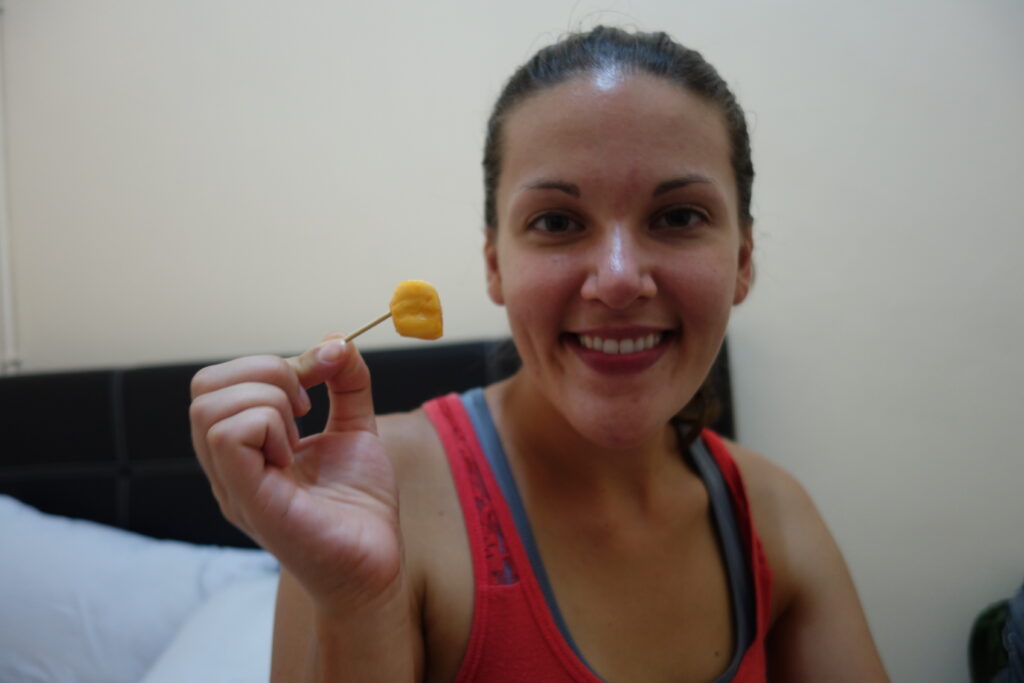 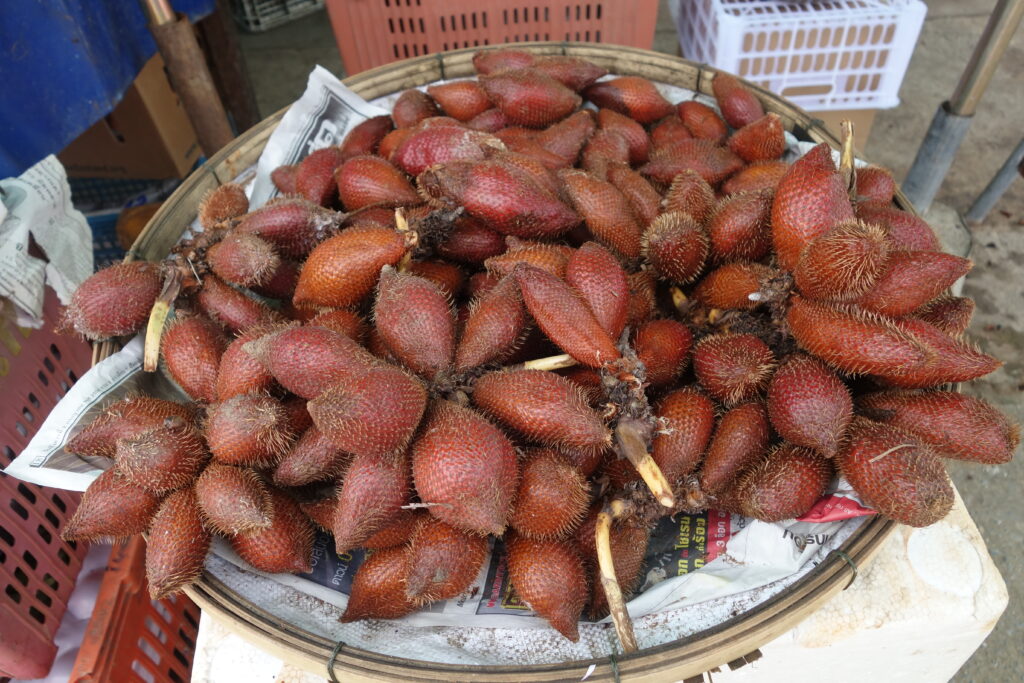 The snake fruit, called salak in its home of Indonesia, was very different from other fruits we’ve tried. This fruit is actually in the palm family and therefore is related to dates and coconuts. It has very sharp and prickly hairs on the outside that make holding the fruit with the bare hand somewhat painful. Break one open and you will reveal three white lobes of flesh inside. 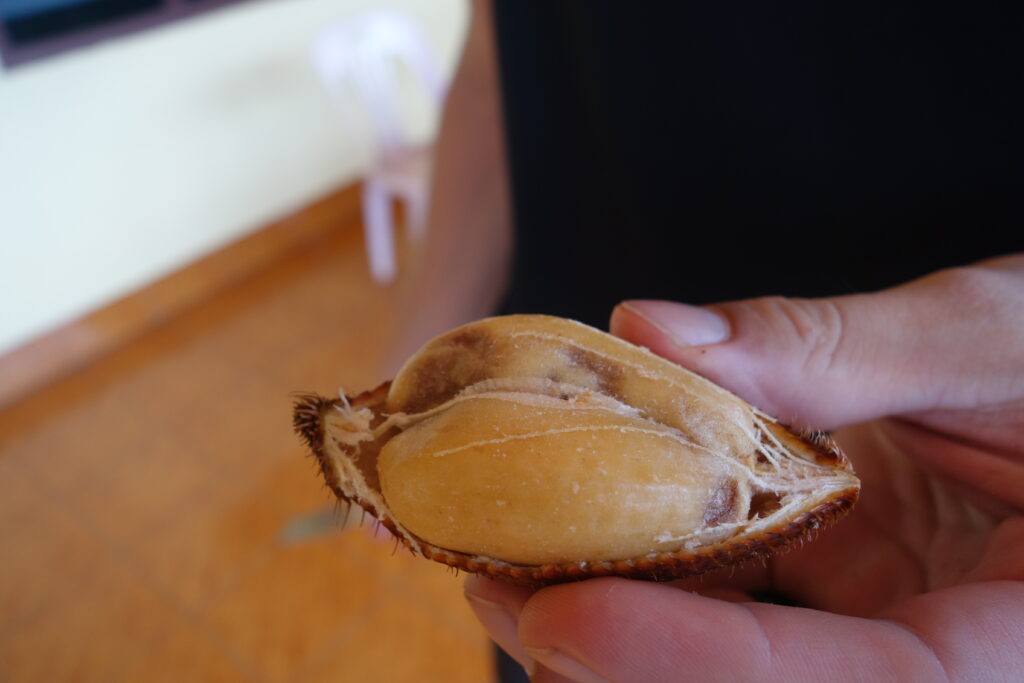 Inside of a snake fruit.

I can’t really describe the texture, because it varies considerably between cultivars of the fruit. The one we tried in Laos was fleshy and juicy and sweet, while the one we tried in Indonesia was dry, crisp, and slightly astringent. 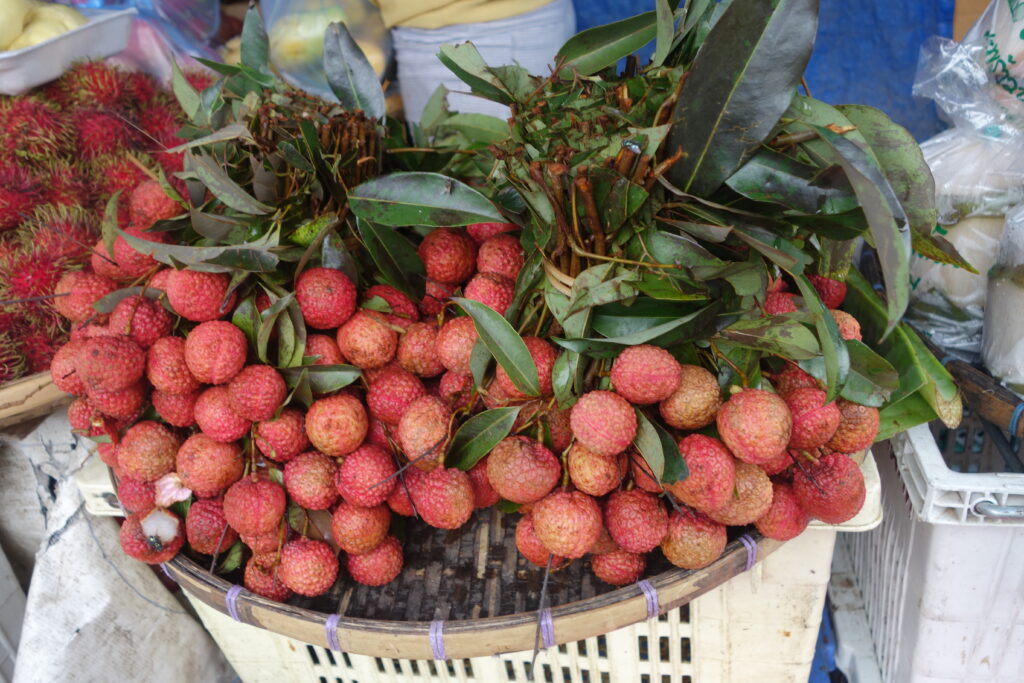 Lychees for sale in Thailand.

Related to the longan and rambutan which we had already tried, we didn’t think we needed to go out of our way to try the lychee. Fortunately (upon recommendation from our friend Rachel) we made sure to try it in Thailand and it was great – so much better than the other two. It is very sweet, juicy, fragrant, and is incredibly rich in flavor. Fortunately I know that I’ve seen canned lychee and lychee juice (which is also delicious) for sale in the Asian grocery at home, so you can try this one without having to travel to Asia. 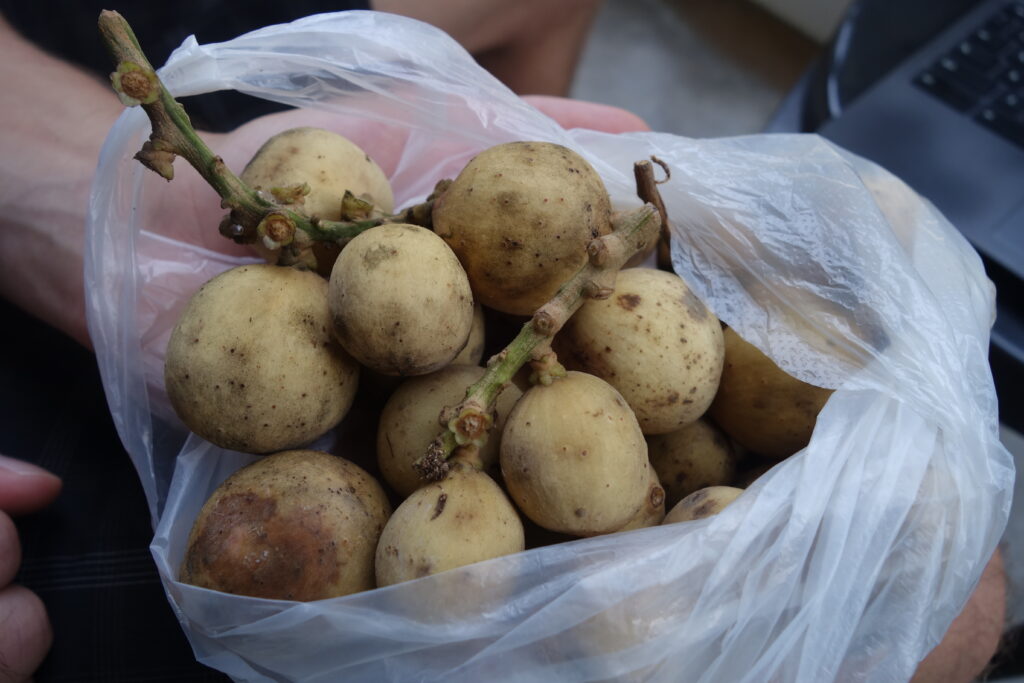 Langsats on the way home from the market in the Tanah Rata.

The langsat appears and tastes as if it is a member of the soapberry family (longan, rambutan, lychee) but is actually a member of the Mohogany family. Peeling the skin covers your hands in a sticky slimy resin that is impossible to wash off with soap and water. Unfortunately we didn’t have any Goo-Gone available to see if that would have freed our hands from their sticky affliction. 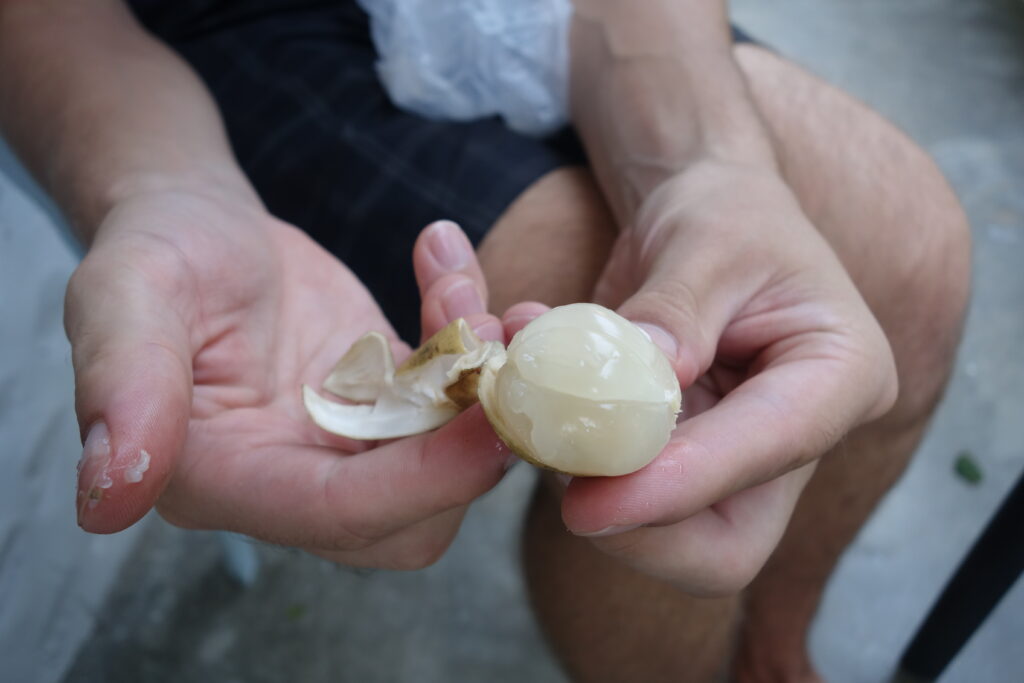 The variety of flavor between the fruits was incredible. Some were juicy, rich, citrusy, and sweet while others were very bitter and unpleasant. Clearly not all of them were ripe, but it was impossible for us to tell because they all looked identical on the outside! Furthermore, some had big seeds that were hard to remove (and very bitter to chew) while others had small, innocuous seeds, and some were completely seed free.

While the seed-free and sweet fruits were delicious, the less ripe fruits made the experience of trying the langsat so-so. Furthermore, having our hands covered in sticky resin after eating the fruit was unpleasant.

I would happily eat these if served to me prepared, but I don’t expect to try them again whole. 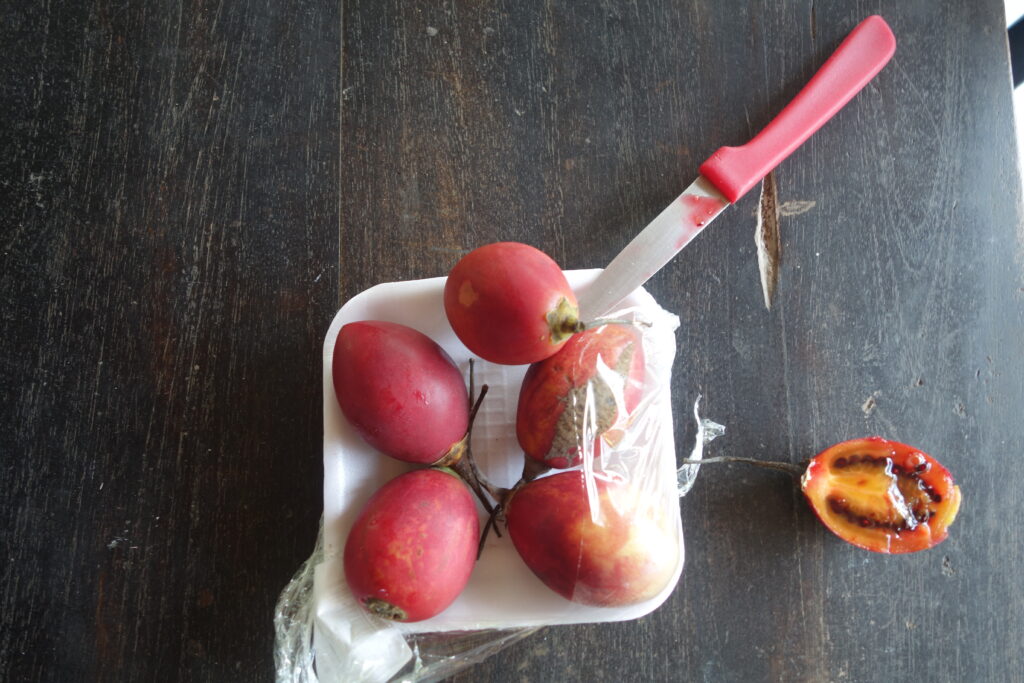 Fresh from the supermarket in Ubud.

The tomarillo (not tomatillo) is a fruit native to the Andes of South America but is now also grown in Asia. To be honest, I think the fruits that we tried were shipped to Indonesia from New Zealand, but I’m not sure.

These were strange. The fruit has a tough outer layer, while the inside is softer and can be scooped with a spoon. The fruit has a pleasant flavor but is intensely sour. It tastes like a sweet and tangy tomato. After eating a few our mouths were reeling from flavor overload. The fruit also had a high percentage of (edible) seeds with which to contend. 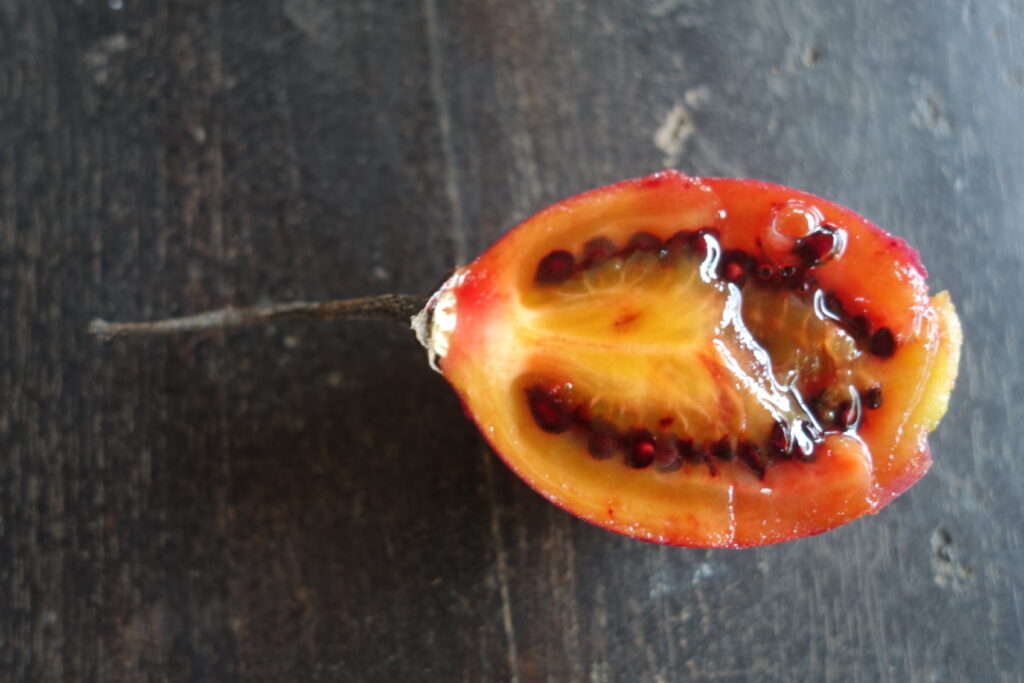 I wasn’t a big fan of this one by itself, though cooked in a brown sugar solution I could see it making a dish similar to cranberry preserves to use as a topping. Alternatively, served atop a salad, its flavors may shine.