It turns out Laos gave us many opportunities to try new interesting dishes and ingredients. Without further ado: 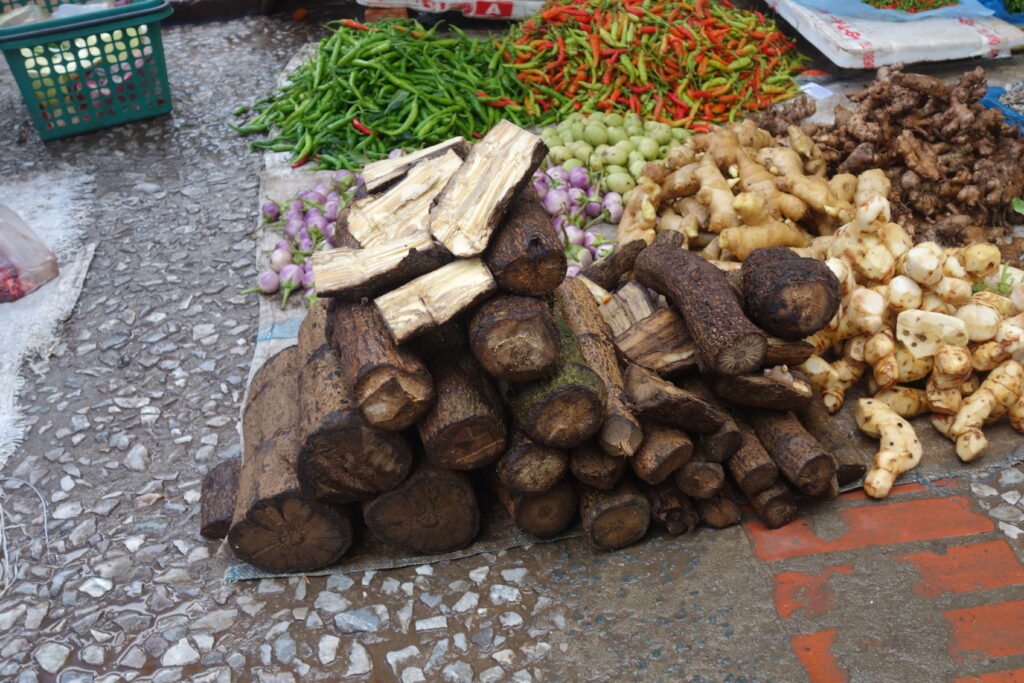 Pepper wood for sale at the market in Luang Prabang. 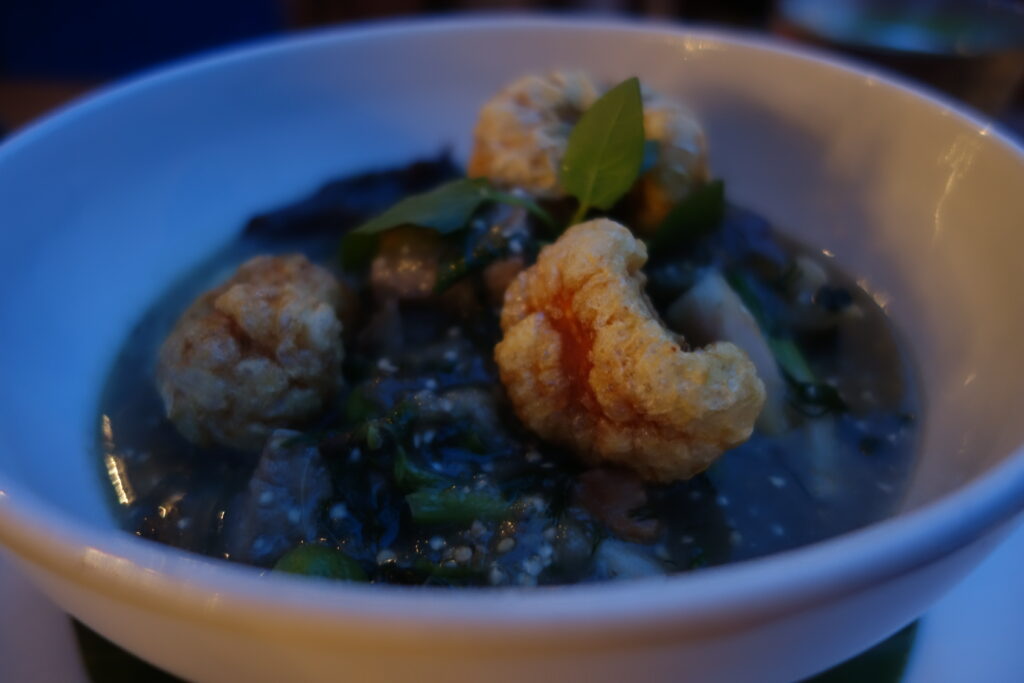 Or lam soup (with pepper wood).

In northern Laos we discovered that they use a specific type of wood as an ingredient in soups. Called “pepper wood” in English (and called Piper Interruptum Opiz in the language of science), the wood is cut into small cubes roughly 1 square centimeter and cooked in the soup. Not only does the wood enhance the soup with a piquant flavor somewhere in between black pepper and cinnamon, but the bark actually softens to the point that you can chew and eat it. To our surprise we found that it was quite easy to chew and had a pleasing flavor – though it briefly numbs your mouth and causes a tingling sensation. The center of the wood is too hard to eat though, and we had to spit it out. 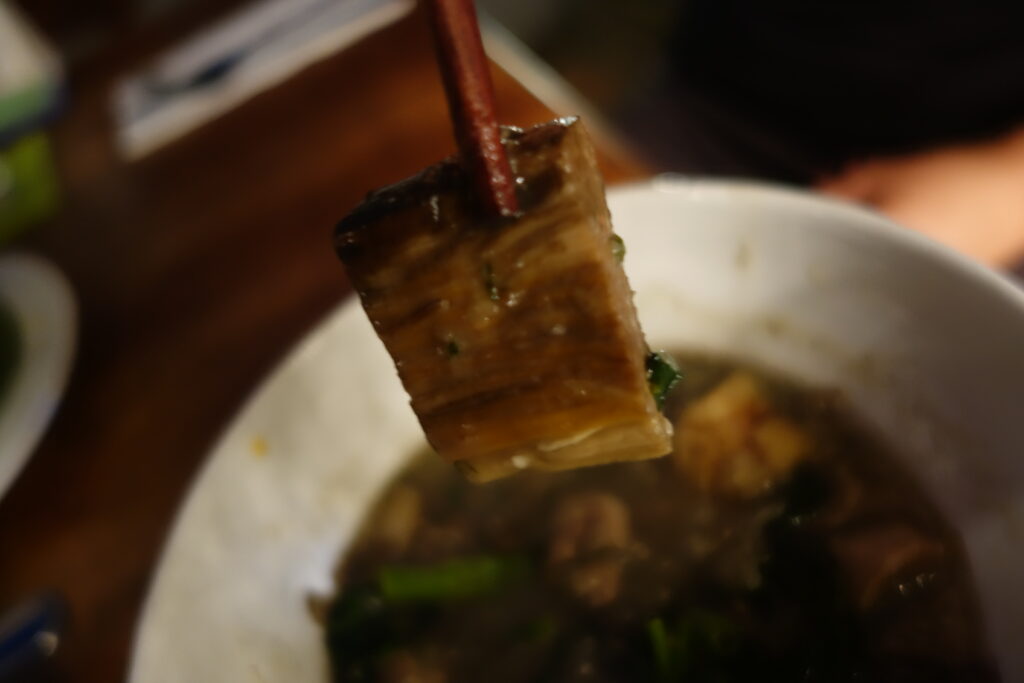 A piece of the wood in the or lam soup.

If you find eating wood to be really strange, you may be surprised to learn that ground wood is actually present in certain common food products. 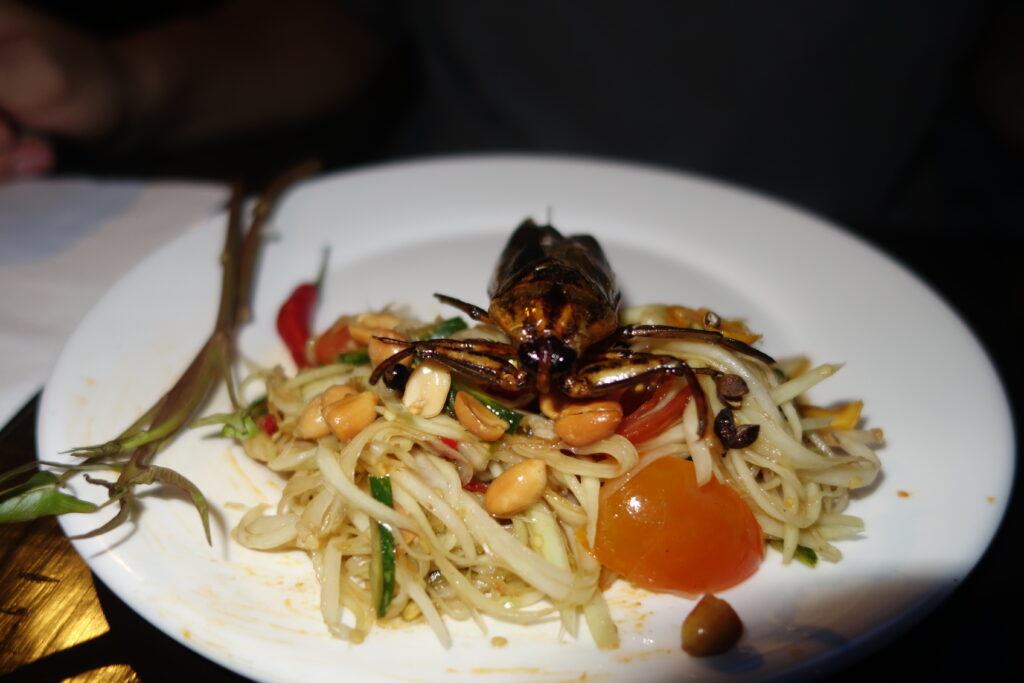 King in the castle.

The same group that operated the restaurant in Phnom Penh where we ate tarantula also operated a restaurant in Vientiane. While the restaurant served some excellent Laotion dishes, the main reason we paid them a visit is that we had seen on their menu that they serve a green papaya salad with friend giant water beetle on top.

We were disappointed when our order came out sans giant water beetle. I presume most people overlook it on the menu and freak out when their salad arrives à la beetle and so they stopped serving it. Fortunately, asking them about it prompted them to bring out the beetle by itself on a small serving plate. 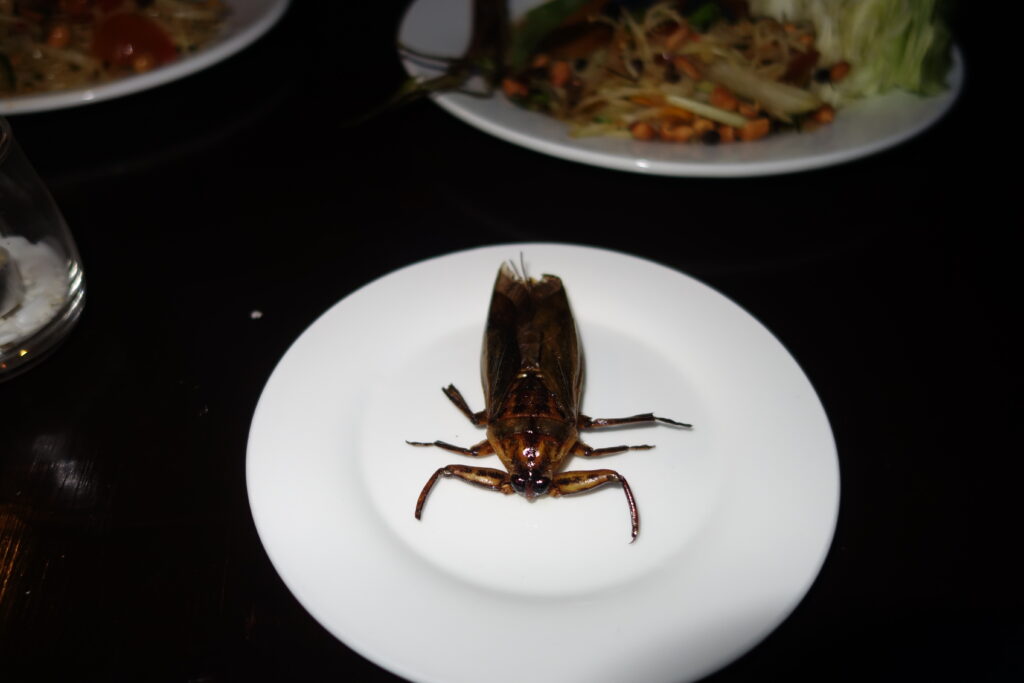 Unlike the fried tarantula which had a nice crispy and crunchy texture, the water beetle had a crunchy toughness that no amount of chewing broke down. It was a tough and chitinous shell that we had to eventually just swallow with some water, having never felt like it was chewed enough. The flavor wasn’t really good or bad – we were just overwhelmed by the amount of chewing necessary. I wouldn’t order this one again. 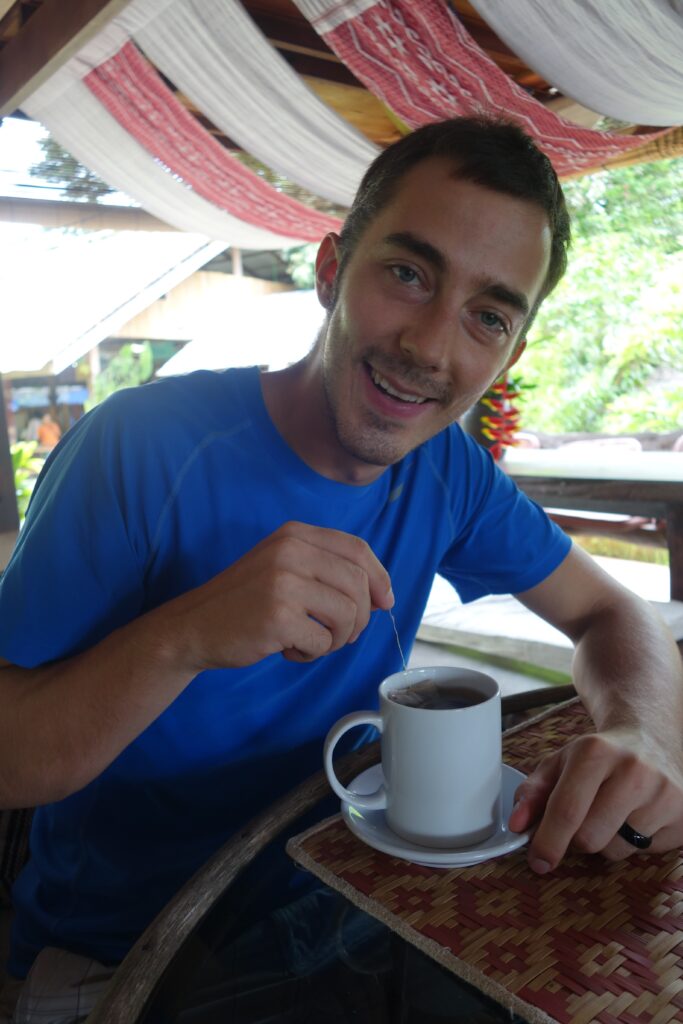 This one is clearly tea – how strange can tea be? We sampled this tea at an artisanal cloth making shop in Luang Prabang called Ock Pop Tok Living Craft center. They have a small amount of silk worms which they use to make their own silk and they actually harvest the worm excrement and use it to make tea. They call it silk worm poo tea. The flavor was very mild and pleasantly earthy. Not good enough to order again but not remotely bad either. Just bland and earthy. 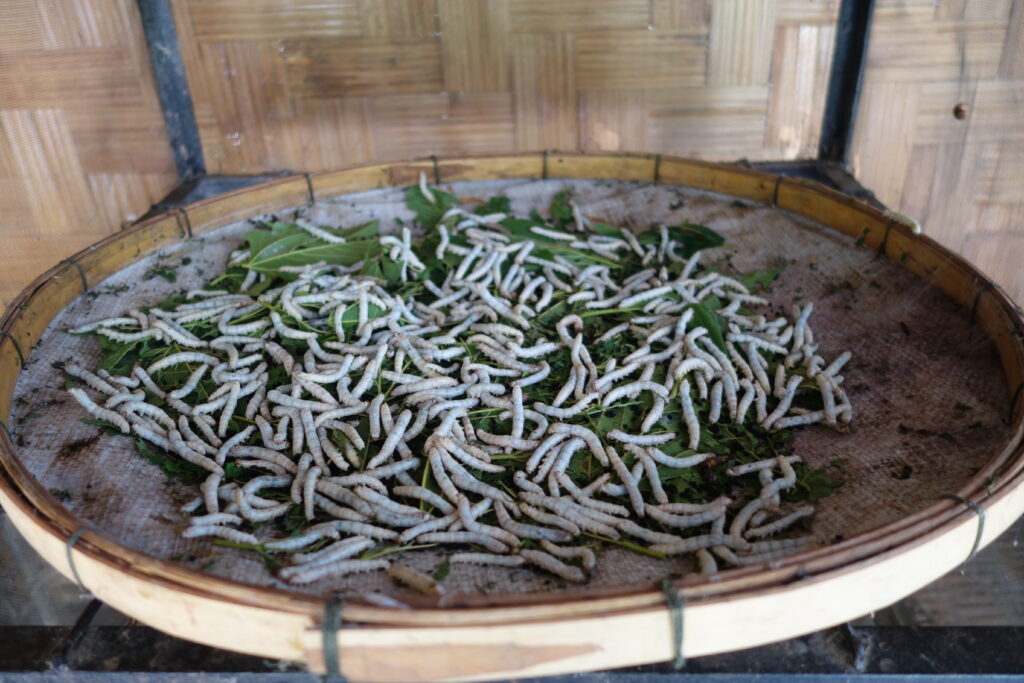 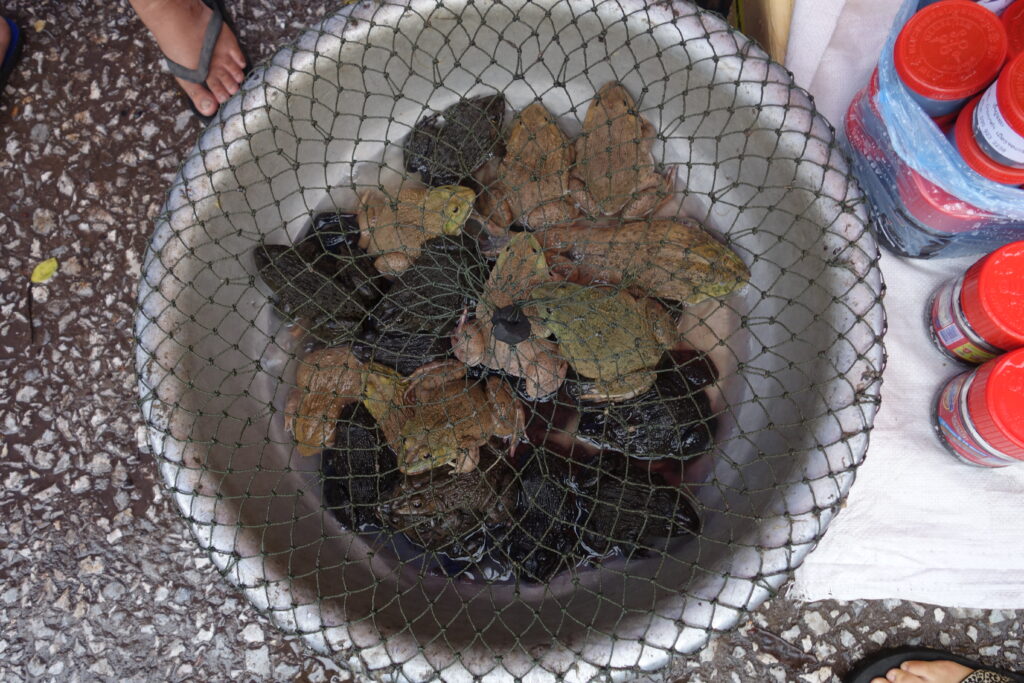 Frogs for sale at the market in Luang Prabang.

We visited a Laotian restaurant in the capital of Vientiane that serves a number of local delicacies, many of which include ingredients which are unfamiliar to westerners. We had a fried mixed vegetable with frog meat and an omelet prepared with ant larvae. 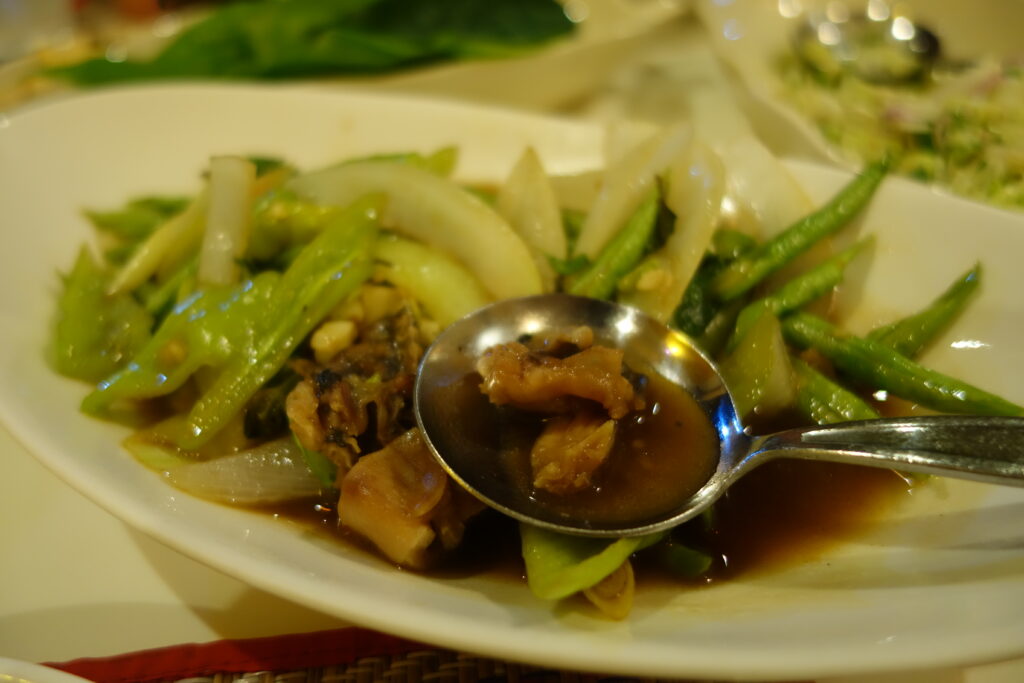 Sorry to bore you with a cliche, but frog tastes almost identical to chicken. It has an enourmous number of bones that require spitting out, which was a huge hassle. A hypothetical “de-boned” frog would be quite nice, but in my opinion the hassle of the bones doesn’t justify the small amount of meat if you’re eating solely for pleasure. 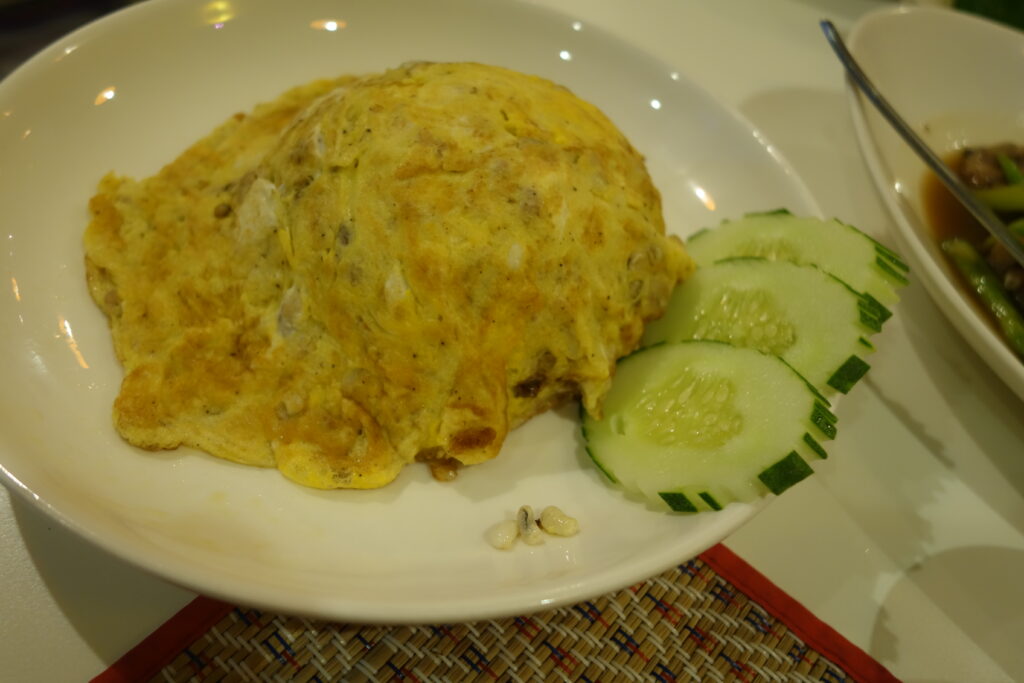 The eggs are tiny and embedded in the omelet. You can see the few that we picked off to the side in order to try by themselves.

The flavor of the ant larvae was too mild for me to describe – a very mild earthy flavor. They gave a pleasant pop when chewed. They went well with the egg flavor, and I would happily add them to a variety of dishes if they were available at a reasonable price at home. 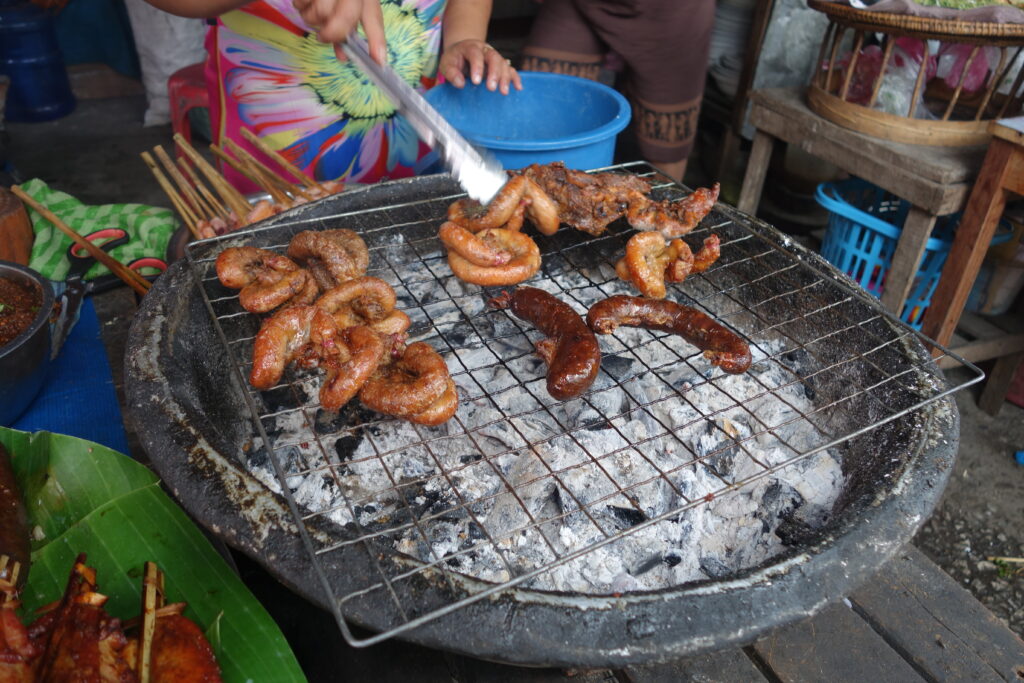 Buffalo sausages in the foreground.

Admittedly, sausage in and of itself isn’t really that strange. It was the flavorings that made these sausages unique; they were strongly spiced with kaffir lime, lemongrass, and spicy chilies. We were totally caught off guard – these were the best sausages we had ever had – and we’re from Wisconsin, so that is saying something! 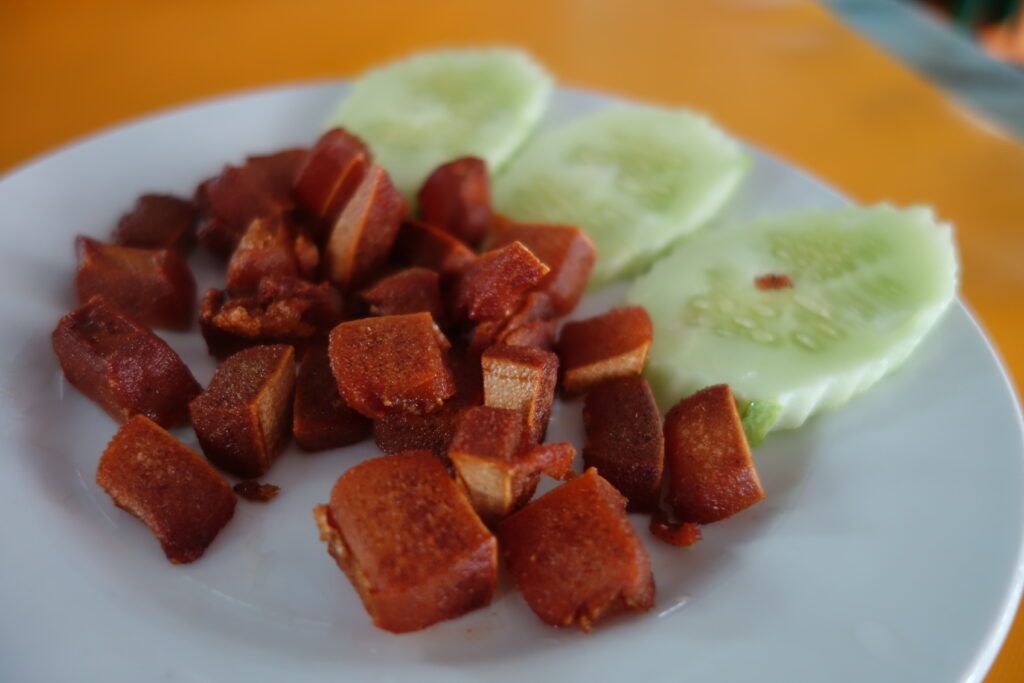 Fried water buffalo skin was a dish we saw offered in several restaurants in Laos, so we thought we should try it. This was one of the few dishes that we were unable to finish in its entirety. While the flavor of the meat was vaguely baconish, and the dipping sauce was tangy and spicy, the meat itself was as tough as tire rubber. You had to let the meat soak in the saliva in your mouth for a minute first and then slowly start chewing. Several minutes later the meat might be starting to loosen. Eventually, and if helped along by a big swig of water, you may be able to swallow the partially chewed meat. After eating about half the plate both of our jaws were quite sore and we decided we had had enough. The work of mastication was not justified by the mild flavor.

You can imagine we were quite surprised when two months later in Indonesia, we were again served fried water buffalo skin, but this time the skin was prepared in such a way that it expanded significantly and had a very fluffy texture – think soft tofu. This skin was moist, tender, flavorful, and enjoyable and chewed properly in no time. We learned that the cooking method apparently matters significantly when it comes to frying skin. 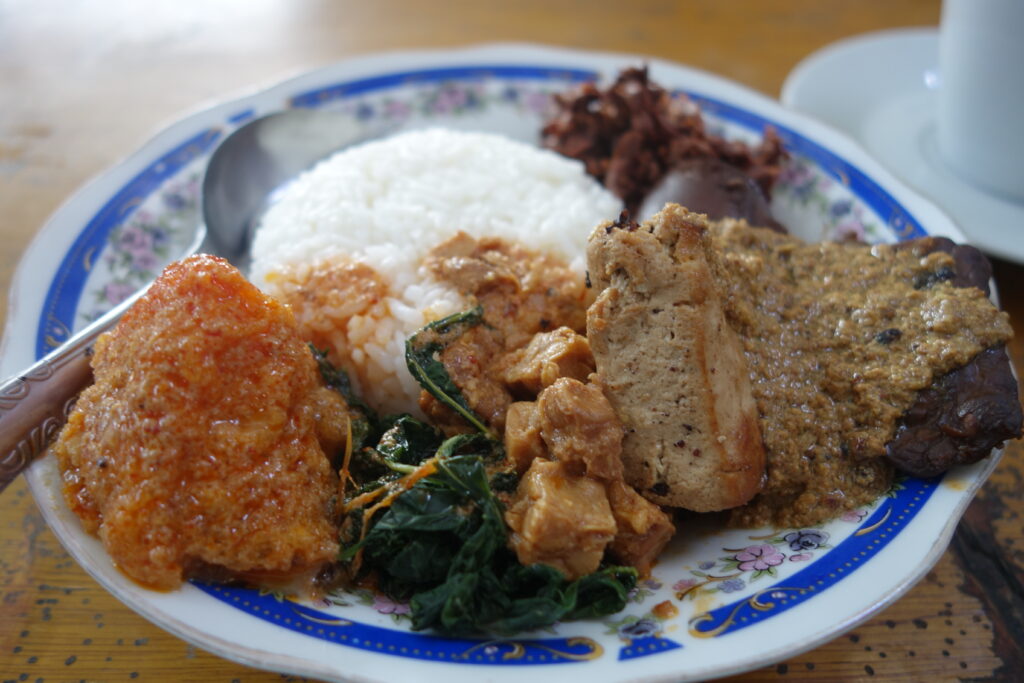 Indonesian gudeg – the orange blob on the left is fried buffalo skin.

Chunks of bee hive with squirming larvae inside.

We noticed a woman selling roasted chunks of bee hive at a market at Luang Prabang and stopped to take a picture and consider buying some. Right as we decided to buy one and started heading over, a man approached the vendor before us and bought all of the remaining hive. It was only as we approached that we noticed that she wasn’t just selling roasted honey in the comb – she was selling freshly roasted hive with bee larvae inside. We would have been excited to try it but unfortunately we didn’t see any for sale by other vendors at the market. Perhaps next time?

← Indonesia: The Good, The Bad, and The Quirky
Myanmar: Land of Green and Gold →