Seoul, the capitol of South Korea, houses over half of the entire population of the country (about 25 million out of the total population of 50 million). Furthermore, Seoul is the second largest metropolitan area, by population, in the world. When Jon and I went to N Seoul tower and when we hiked up Mount Inwangsan and had a full view of the city from above, it was almost incomprehensible. Skyscrapers in every direction going as far as the eye could see. They looked like Lego’s in a vast legoscape. We’re used to cities like New York or Paris where there is one “downtown” where the skyscrapers are concentrated – not cities like Seoul where they are everywhere.

Hangul, the official script of Korea, is the only script (the spoken language already existed) with a known inventor and known invention date (within the subset of languages actually spoken by real populations – eg. not elvish). It was invented in 1443 by king Sejong The Great. Before this time, Koreans used Chinese characters. Because of the complexity of the written language and the amount of time needed to learn the characters, the majority of Korea’s population was illiterate. Only the wealthy had the time and opportunities to learn to read. The spoken language of Korea was also fundamentally different from Chinese, so using Chinese characters to express Korean was very difficult. Because of this, Hangul was invented to decrease illiteracy and simplify the written language. Hangul was designed to be incredibly simple and easy to learn. A person could sit down and learn to read Hangul in an afternoon. The script was designed to be phonetic and the shape of the written characters is based on the shape of a person’s lips, tongue, throat, etc. when making the sound associated with that character.
Example: this is the hangul letter for g:ㄱ when you make the sound g, your tongue makes this shape ㄱ (side view).

Kimchi, a side dish of fermented vegetables, is served with almost all meals in Korea. South Koreans consume 40 pounds of kimchi per person annually and there are over 100 different types of kimchi. Every restaurant we have been to and every homemade Korean meal we have eaten has had kimchi in and around it, breakfast included. In days past, kimchi would be buried underground and allowed to ferment there for months – sometimes up to 2 years. The kimchi would help Koreans make it through rough winters by allowing them to keep a large supply of vegetables, which stored well and could be taken out of storage as needed. Today, many Korean households have special kimchi refrigerators. Our host family in Yangyang had one of these, so we got to see it close up. Kimjang, the tradition of making kimchi in the fall, is even on the UNESCO World Heritage list for Intangible Cultural Heritage for Humanity.

Kimchi on the left and the right in a restaurant. 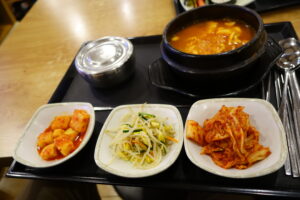 Kimchi soup, and two types of kimchi, along with other banchan (more on that later). 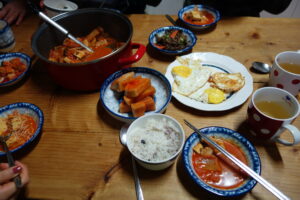 Sunny (our Couchsurfing host in Sokcho) showing us the inside of her kimchi refrigerator. 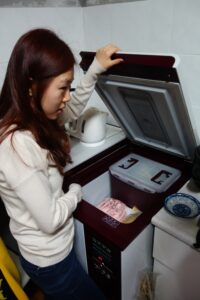