Our story begins about a year and a half ago when we saw Ijen on one of the episodes of the BBC’s documentary series Human Planet. The story of the incredible lives of the locals who eek out a living hiking into and out of the Ijen volcano daily to harvest sulfur was enthralling. The environment is quite inhospitable, especially for a person without a gas mask surrounded by choking sulfuric gasses, who is carrying over 165 pounds of sulfur on his back, heading up a rocky and uneven “path” with a 45-60 degree gradient, often in the dark. Many miners make the trek early in the morning before the sun rises in order to avoid the heat of the sun. Most make a second journey later each day.  While watching this program, I thought “this is insane”. As to how much they are paid for this dangerous work: about $7 per load, depending on the exact weight. This is a good wage by local standards – the local minimum wage is approximately 4 dollars a day.

Fast forward to a few months ago. While doing research on Indonesia, I discovered a blog post about Ijen and the “blue flames” which can be seen when the conditions are right (early morning before first light, wind blowing in the right direction, etc.). We decided that it was something that we had to do, even if we might not see the blue flames. At this time, I didn’t even realize that it was the same place that we had seen featured in a few documentaries.

On to the eve before our trek. We spent the evening in Bondowoso at a hotel which came highly recommended. The hotel arranged a private driver to take us to Sempol where we would begin our trek. We chose the earlier time for the pickup, so that we would have plenty of time to work with and to give us a better chance of seeing the glowing blue flames. We slept for a few hours, and woke up at 10:30 pm to pack up for our 11 pm departure. The drive to Sempol took us just under two hours. We didn’t sleep a wink, because of the sharp winding of the road and intermittent non-paved sections which harbored gigantic pot holes.

Arriving at the entrance before 1 am, we had to wait for the trail to open. As soon as the clock struck 1, we began the 3 km trek to the crater’s rim (almost 2 miles). The trail was wide and flat, but very steep (about 30-40 degrees) most of the way. We trekked quickly and quietly along in the dark, using our headlamps to follow the trail. We were the first (of the tourists) to arrive at the crater rim just after 2 am (we hauled ass and trekked almost twice as fast as most visitors). From the rim, we could see tiny blue lights in the distance. Excitement growing, we hiked another 30 minutes, down 300 meters (~1,000 ft). The rocky path was steep, uneven, and involved some scrambling. Approaching the bottom, we began to hear the mining activities and we were able to see the blue flames more clearly.

Finally, we had made it to the bottom. We made ourselves comfortable and observed the ignited sulfuric gasses emerging from the earth at an intense pressure and heat (over 1,112 degrees Fahrenheit). It was amazing! It was likely the coolest natural phenomenon either of us had ever seen.

We also were able to observe the miners chiseling off chunks of sulfur. Pipes have been built which cool the gases to liquid sulfur and then channel it onto the ground where it cools and is later chiseled into bits and loaded up to be carried down to town. 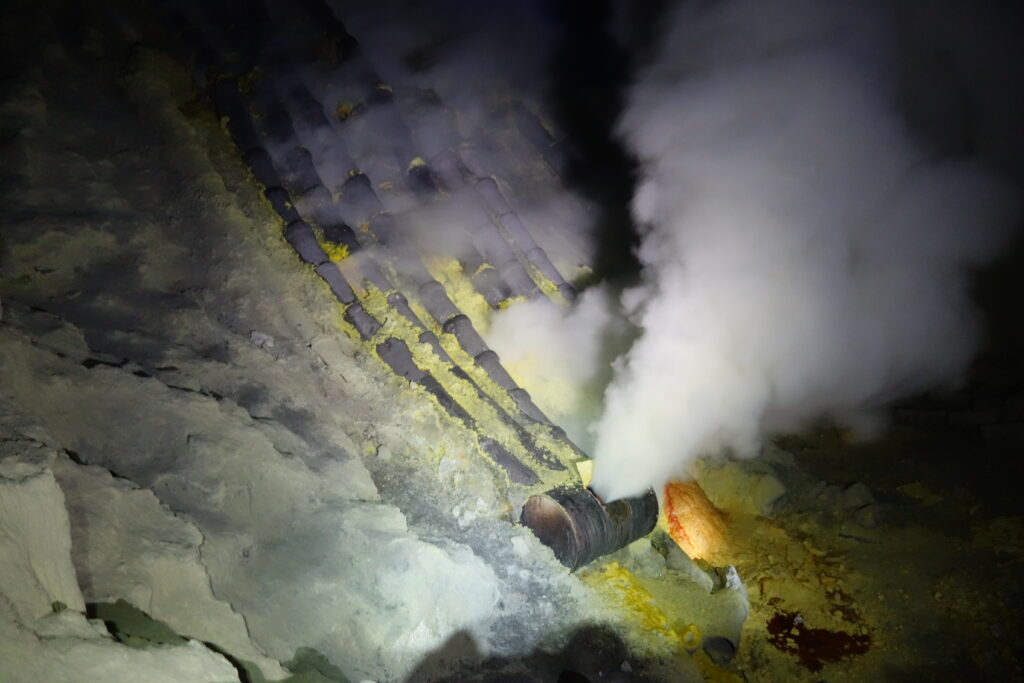 Pipes channel molten sulfur which pools at the base, cools, and is collected by miners. 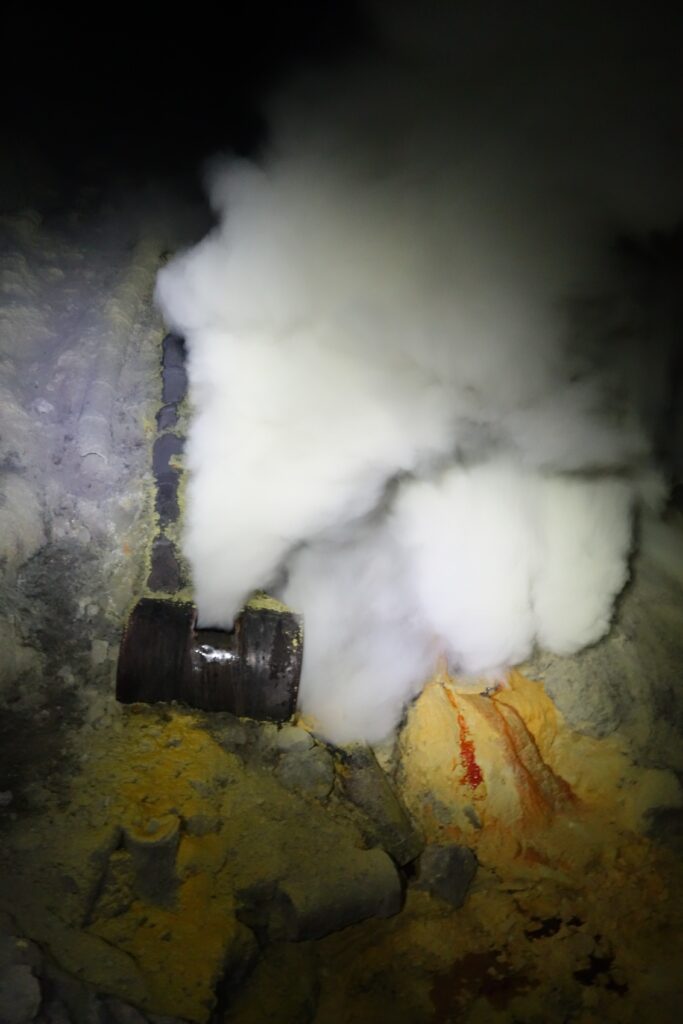 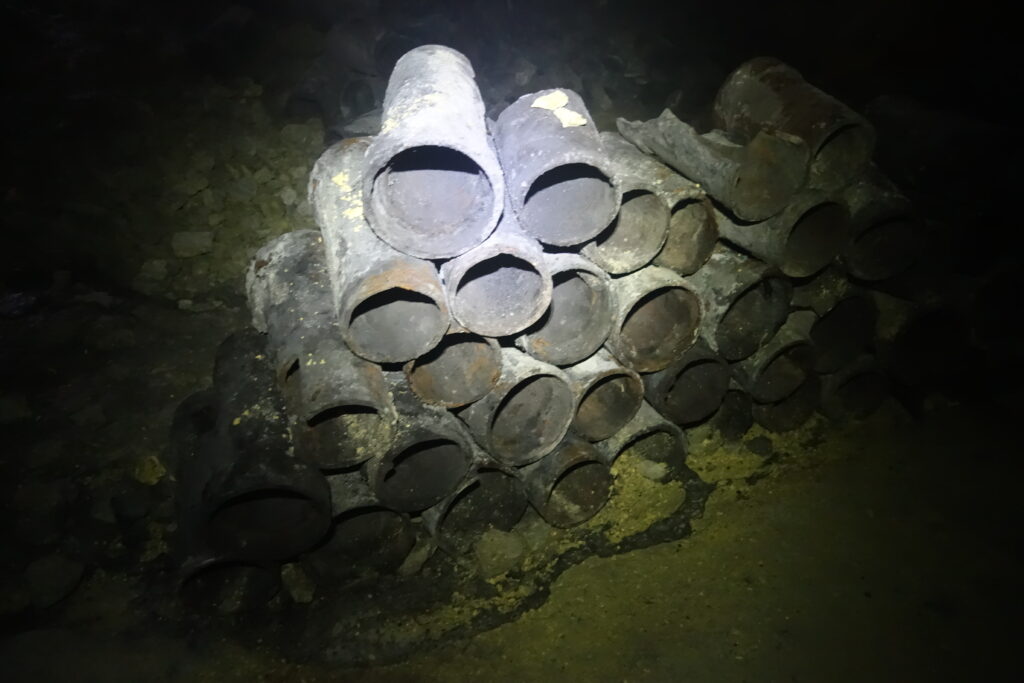 A pile of the ceramic pipes used to funnel the gases and liquid sulfur. 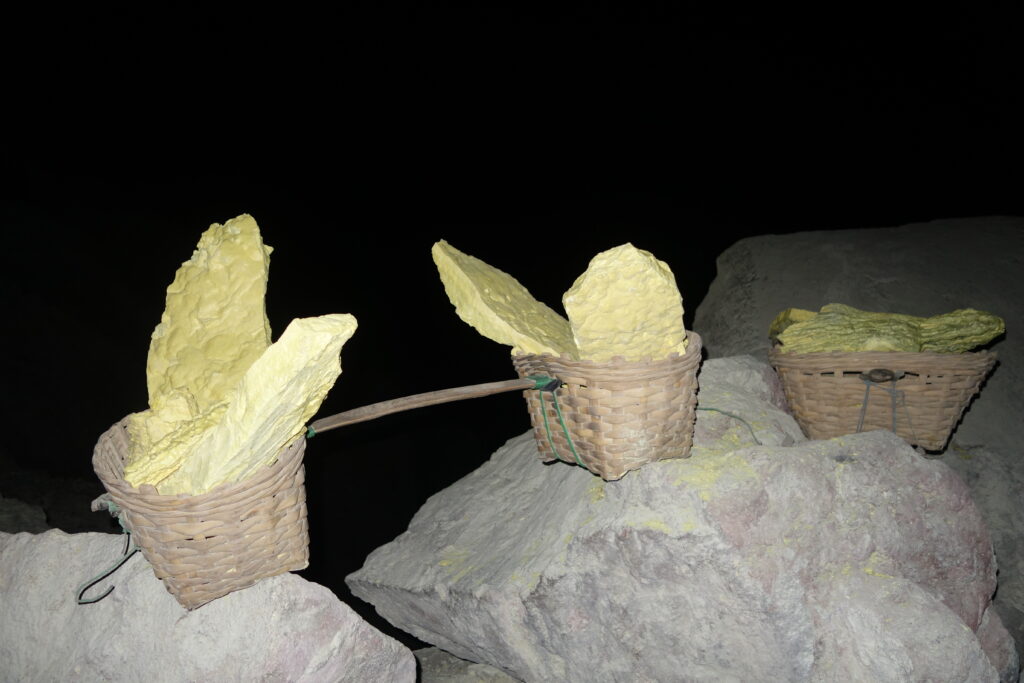 Next, we headed off to the right where we were told we could see the acid lake. Scrambling a bit over some rocks (there was no clear path and it was still entirely dark with the exception of the blue glow and the light from our flash lights), we made it to another area with emerging sulfuric gas and some burning molten sulfur forming a pool in one area and flowing down the rock in another. It was incredible!

We continued on to see the lake. Since it was so dark and because of the white smog of the various emitted fumes blowing over the lake, we really couldn’t see much, so we headed back to the previously mentioned area. Stopping again to admire the blue-burning liquid sulfur, we stood among the boulders and scree. All of a sudden the wind changed, and our senses were assaulted by the noxious fumes. (The burnt gas has high concentrations of noxious sulfur dioxide.) We were surrounded by the white smog, our flashlights only allowing us to see about a foot in front of ourselves. We crouched in a crevice where the fumes weren’t so thick and poured water onto our “masks” (cloth headbands we were using to cover our mouths and noses). Our eyes stinging and throats burning, we both had a moment of panic as we realized that we needed to get out of there ASAP but had no way of seeing which way we needed to go to get out. The path was not clear and involved some scrambling (in fact, it wasn’t a path at all), so although we were not far from the main path, it was not going to be easy to get out of there without being able to see.  Luckily, after a minute of sheer fear and panic, the cloud of fumes dispersed just enough that we were able to see where we needed to go. We moved as quickly (and safely) as possible and got the heck out of there. The winds continued to blow the fumes towards us as we ascended the crater ridge, but it was less concentrated the further we ascended.

This experience made us realize how lucky we had been up until that point. The wind had been blowing the gas across the lake, away from the path for the entirety of our descent. We knew that there would be sulfur dioxide fumes, as we had read about the hike in advance, but we didn’t know just how bad it could be. We had planned on buying proper gas masks at the crater rim, but we had arrived too early and the gas mask vendors hadn’t yet arrived. 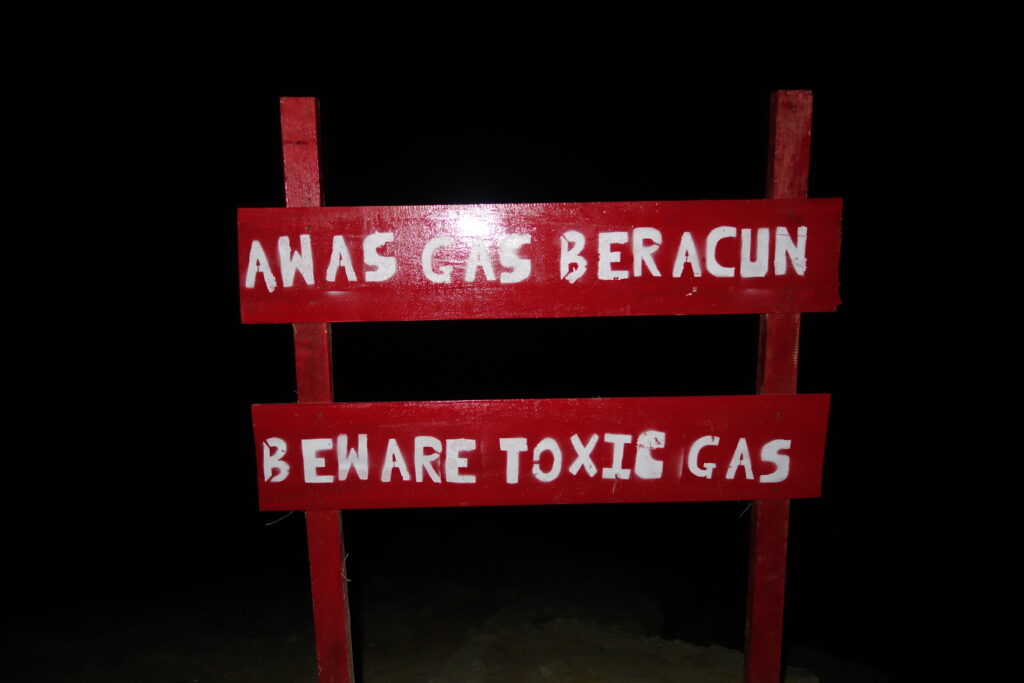 We we warned at the crater rim that there would be toxic gasses ahead.

It was a much more crowded trip back up, as we passed hundreds of people making the descent to see the blue flames. Back at the rim, we admired the long trail of flashlights along the path down to the acid lake and were grateful that our trip down was free of people and free of noxious gasses.

Next, we wasted some time before taking the crater ridge trail to a well-known sunrise vantage point. There we watched a beautiful sunrise over a sea of clouds. 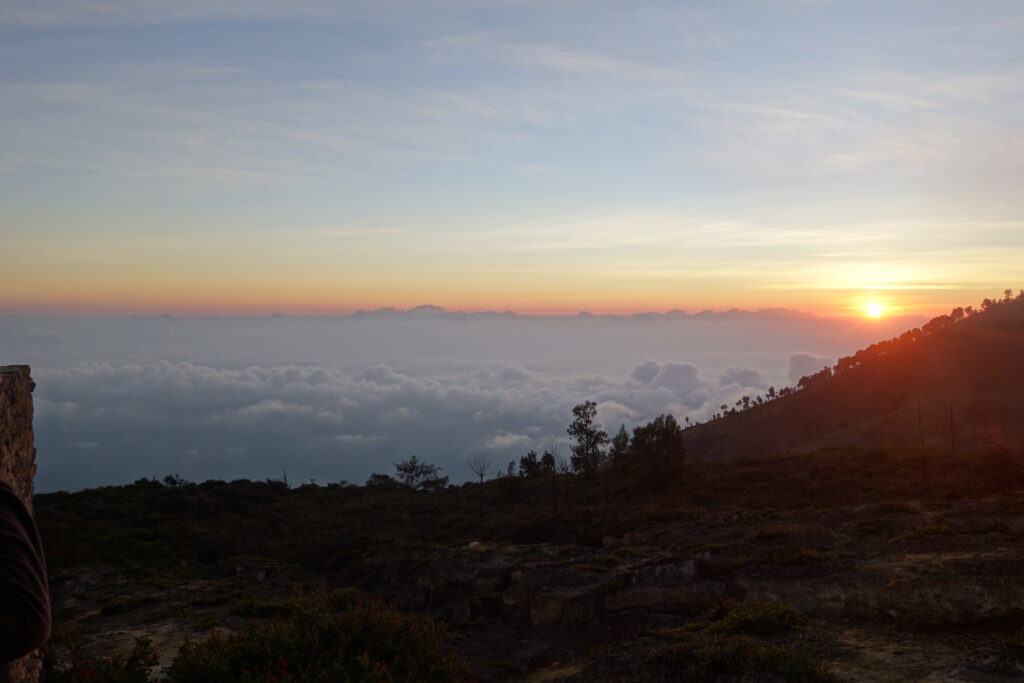 The sunrise viewed from the crater rim. 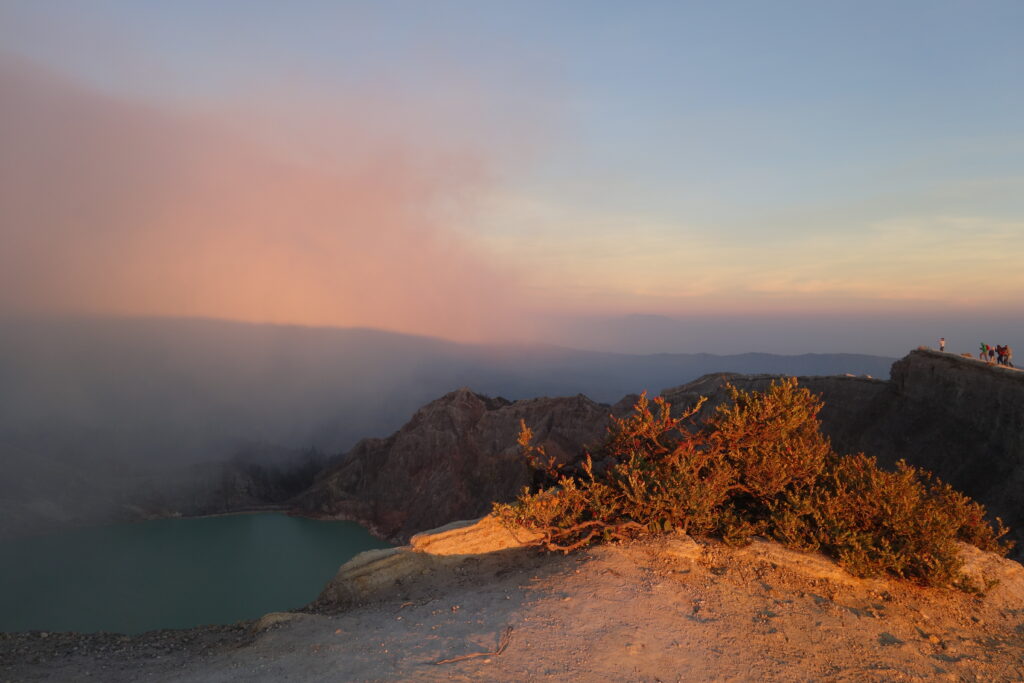 The acid lake off to the left viewed from the crater ridge (the fumes created a haze over the lake, obscuring it for the most part).

As we trekked back the way we came, we were stunned to see the beautiful landscape we had been surrounded by (but unable to see in the dark). 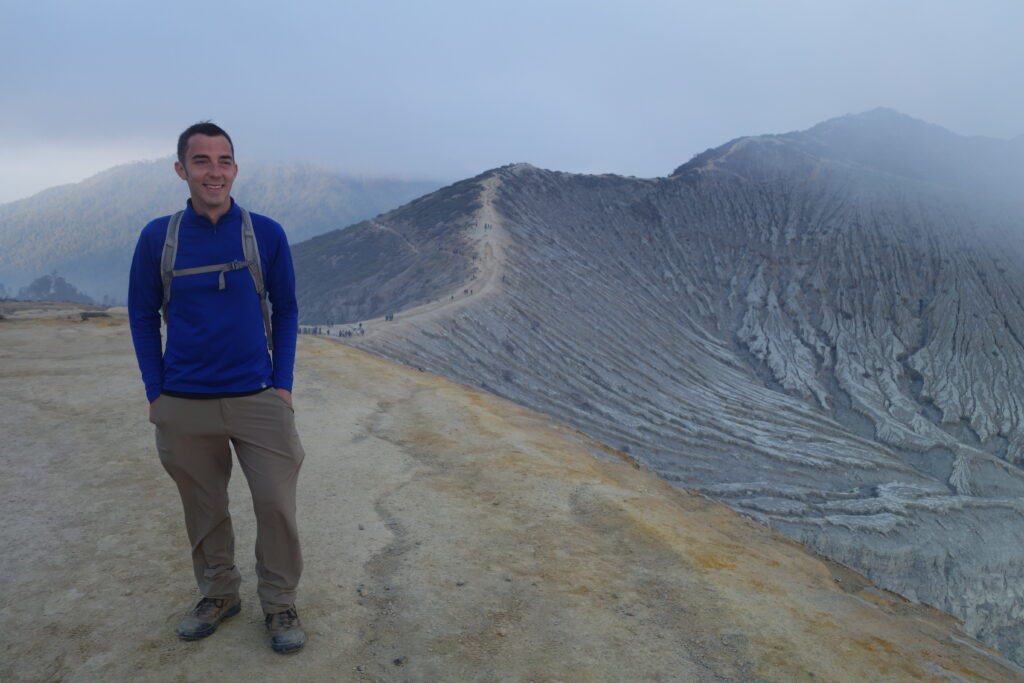 Jon posing with the crater rim trail in the background.

The crater rim and crater lake. 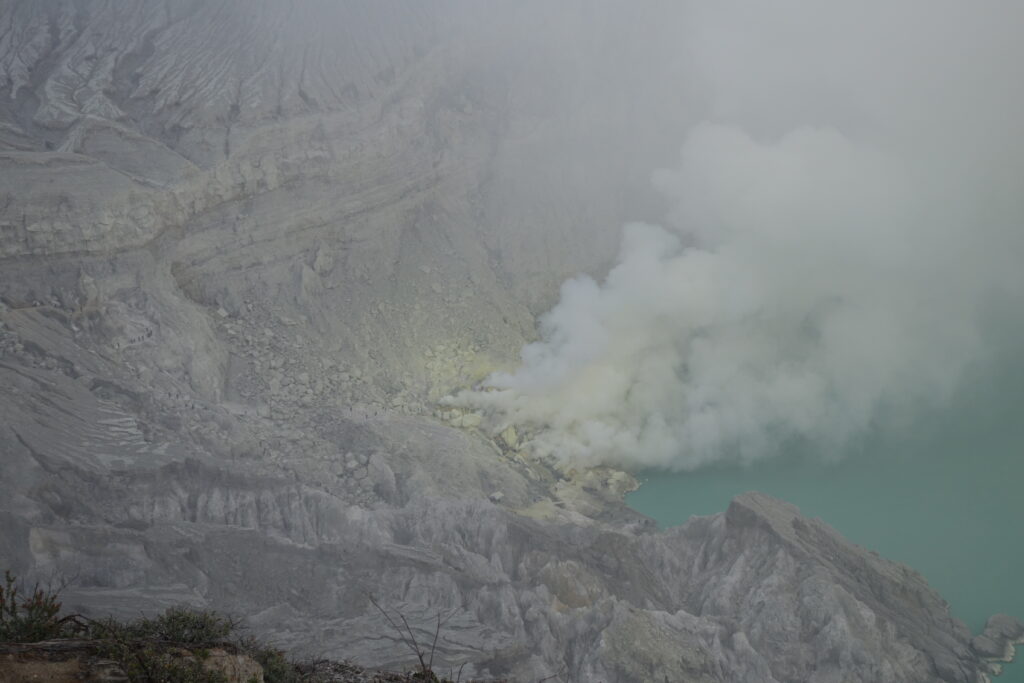 The sulfur mine as viewed from above. If you look really hard, you may be able to see little people off to the left making the trek into or out of the caldera. 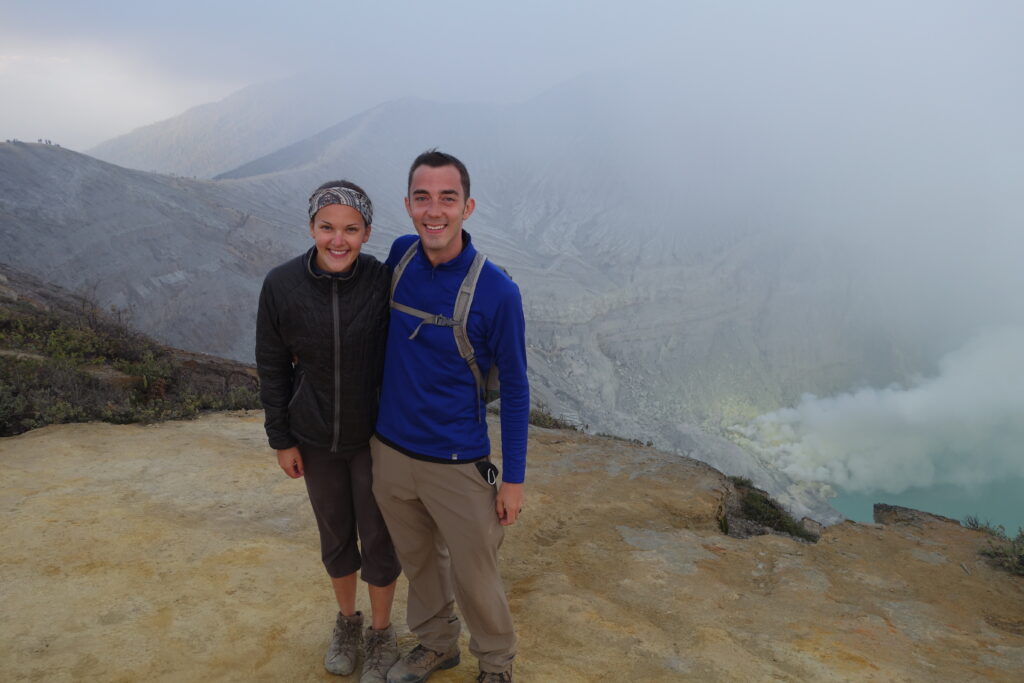 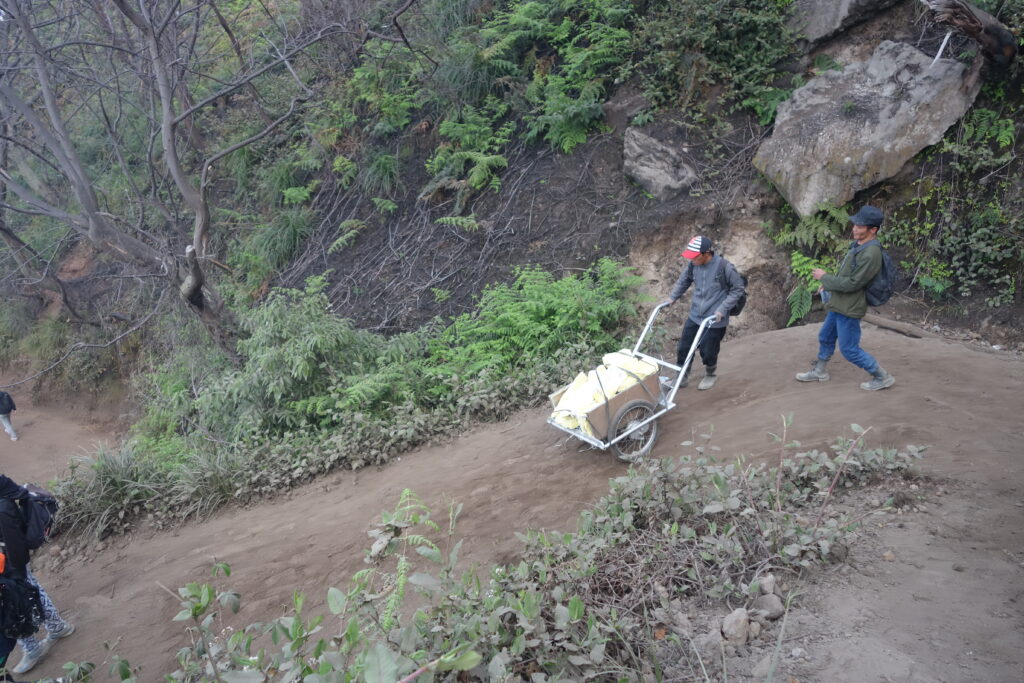 On our way down we passed some men hauling the sulfur on their backs while others transferred their loads into wheelbarrows waiting at the crater rim. 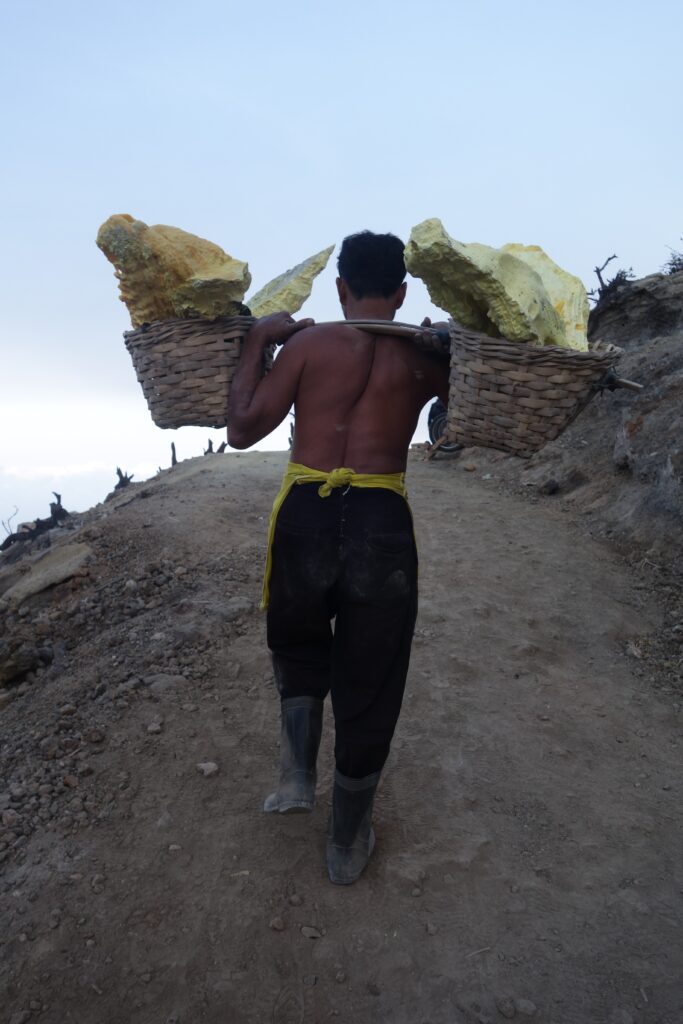 A miner hauls his load.

The entire experience was one of the most amazing and (for a moment) most frightening things we have ever done.

Fire and brimstone. Stinking, choking fumes. When people in antiquity encountered vulcanism in the wild, many thought they had discovered gates to hell or evidence of God’s wrath. I don’t blame them – without a proper understanding of vulcanism I’m sure seeing an erupting volcano, seeing and smelling burning sulfur, or seeing fumes seeping out of the earth would have been a mortally terrifying sight. Understanding the forces behind these phenomenon only turns a complete sense of terror to one of complete awe.

The blue flames and blue rivers we saw at Ijen were one of the most awe inspiring thing we’ve ever seen. And as aforementioned, they are caused by burning sulfuric gases and burning liquid sulfur, respectfully. You’re probably familiar with the word brimstone. But did you realize that brimstone is a synonym for sulfur? It comes from the Old English brynstān – burning stone. The burning stone at Ijen was incredible – it doesn’t surprise me that brimstone is so tied in with descriptions of hell.

← More Tropical Fruits
Indonesia: The Good, The Bad, and The Quirky →